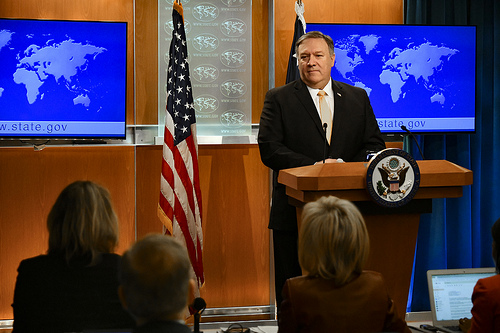 For far too long, Russia has violated the Intermediate-Range Nuclear Forces (INF) Treaty with impunity, covertly developing and fielding a prohibited missile system that poses a direct threat to our allies and troops abroad. Tomorrow, the United States will suspend its obligations under the INF Treaty and begin the process of withdrawing from the INF Treaty, which will be completed in 6 months unless Russia comes back into compliance by destroying all of its violating missiles, launchers, and associated equipment. Our NATO Allies fully support us, because they understand the threat posed by Russia’s violation and the risks to arms control posed by ignoring treaty violations.

The United States has fully adhered to the INF Treaty for more than 30 years, but we will not remain constrained by its terms while Russia misrepresents its actions. We cannot be the only country in the world unilaterally bound by this treaty, or any other. We will move forward with developing our own military response options and will work with NATO and our other allies and partners to deny Russia any military advantage from its unlawful conduct.

My Administration remains committed to effective arms control that advances United States, allied, and partner security, is verifiable and enforceable, and includes partners that fulfill their obligations. For arms control to effectively contribute to national security, all parties must faithfully implement their obligations. We stand ready to engage with Russia on arms control negotiations that meet these criteria, and, importantly, once that is done, develop, perhaps for the first time ever, an outstanding relationship on economic, trade, political, and military levels. This would be a fantastic thing for Russia and the United States, and would also be great for the world.

At the core of President Trump’s foreign policy are a few very, very simple truths. The security of the American people must be our greatest consideration, the agreements into which we enter must serve American interests, and countries must be held accountable when they break the rules. For years, Russia has violated the terms of the Intermediate-Range Nuclear Forces Treaty without remorse. To this day, Russia remains in material breach of its treaty obligations not to produce, possess, or flight-test a ground-launched intermediate-range cruise missile system with a range between 500 and 5,500 kilometers. In spite of this violation, for almost six years the United States has gone to tremendous lengths to preserve this agreement and to ensure security for our people, our allies, and our partners. We have raised Russia’s noncompliance with Russian officials, including at the highest levels of government, more than 30 times, yet Russia continues to deny that its missile system is noncompliant and violates the treaty.

Russia’s violation puts millions of Europeans and Americans at greater risk. It aims to put the United States at a military disadvantage, and it undercuts the chances of moving our bilateral relationship in a better direction. It’s our duty to respond appropriately. When an agreement is so brazenly disregarded and our security is so openly threatened, we must respond. We did that last December when the United States, with strong support from all of our NATO allies, formally declared Russia in material breach of the treaty. I also then provided notice that unless Russia returned to full and verifiable compliance within 60 days, we would suspend our obligation under that treaty. We provided Russia an ample window of time to mend its ways and for Russia to honor its commitment. Tomorrow that time runs out. Russia has refused to take any steps to return real and verifiable compliance over these 60 days.

Russia has jeopardized the United States security interest, and we can no longer be restricted by the treaty while Russia shamelessly violates it. If Russia does not return to full and verifiable compliance with the treaty within this six-month period by verifiably destroying its INF-violating missiles, their launchers, and associated equipment, the treaty will terminate.

Before I close, I want to give a special thanks to our NATO allies who have stood with us in our mission to uphold the rule of law and protect our people. Their solidarity reflects the historical strength and unity of the NATO alliance. Their support is good for our shared security, it’s good for trans-Atlantic unity, and it’s good for international peace and security. President Trump is grateful for all that you have done.

The United States is hopeful that we can put our relationship with Russia back on a better footing, but the onus is on Russia to change course from a pattern of destabilizing activity, not just on this issue but on many others as well. The United States stands ready to engage with Russia on arms control negotiations that advance U.S. and allied and partners’ security, and are verifiable and enforceable. It must also include all the partners that must all responsibly comply with their obligations. As we remain hopeful of a fundamental shift in Russia’s posture, the United States will continue to do what is best for our people and those of our allies.

Following nearly six years of U.S. and Allied engagement with Russia, on 4 December 2018, NATO Allies declared that Russia has developed and fielded a missile system, the 9M729, which violates the INF Treaty, and poses significant risks to Euro-Atlantic security. Allies strongly supported the finding of the United States that Russia is in material breach of its obligations under the INF Treaty and called upon Russia to urgently return to full and verifiable compliance.

Since that announcement, the United States and other Allies have remained open to dialogue, and have engaged Russia on its violation, including at a NATO-Russia Council meeting on 25 January 2019. Allies regret that Russia, as part of its broader pattern of behaviour, continues to deny its INF Treaty violation, refuses to provide any credible response, and has taken no demonstrable steps toward returning to full and verifiable compliance.

As a result, the United States is suspending its obligations under the INF Treaty in response to Russia’s material breach, and is providing the requisite six-month written notice to Treaty Parties of its withdrawal under Article XV of the INF Treaty. The United States is taking this action in response to the significant risks to Euro-Atlantic security posed by Russia’s covert testing, production, and fielding of 9M729 ground-launched cruise missile systems. Allies fully support this action.

Unless Russia honours its INF Treaty obligations through the verifiable destruction of all of its 9M729 systems, thereby returning to full and verifiable compliance before the U.S. withdrawal takes effect in six months, Russia will bear sole responsibility for the end of the Treaty.

NATO continues to closely review the security implications of Russian intermediate-range missiles and will continue to take steps necessary to ensure the credibility and effectiveness of the Alliance’s overall deterrence and defence posture. We will continue to consult each other regularly with a view to ensuring our collective security.

We continue to aspire to a constructive relationship with Russia, when Russia’s actions make that possible.

We urge Russia to use the remaining six months to return to full and verifiable compliance to preserve the INF Treaty.

A good piece from ⁦@TheEconomist⁩ that explores military readiness in the German context. But, how many of Western governments have done much better at investing in combat readiness? https://www.economist.com/europe/2023/01/26/the-state-of-the-bundeswehr-is-more-dismal-than-ever https://www.economist.com/europe/2023/01/26/the-state-of-the-bundeswehr-is-more-dismal-than-ever