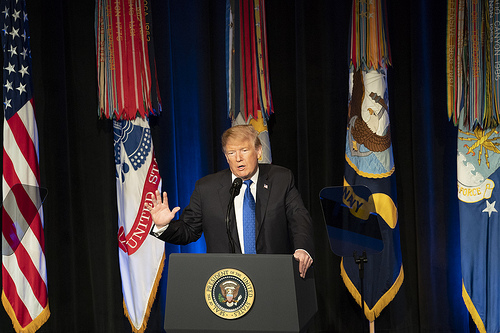 We are committed to establishing a missile defense program that can shield every city in the United States. And we will never negotiate away our right to do this.
Second, we will focus on developing new technology, not just investing more money into existing systems. The world is changing, and we’re going to change much faster than the rest of the world. (…)

The United States cannot simply build more of the same, or make only incremental improvements. What we’ve done to Iran since I’ve become President is rather miraculous. I ended the horrible, weak Iran Nuclear Deal. And I will tell you, Iran is a much different country today than it was two years ago. It’s not the same and it won’t be the same. And I do believe they want to talk.
It is not enough to merely keep pace with our adversaries; we must outpace them at every single turn. We must pursue the advanced technology and research to guarantee that the United States is always several steps ahead of those who would do us harm.
Third, we will protect the American people from all types of missile attacks. In the past, the United States lacked a comprehensive strategy for missile defense that extended beyond ballistic missiles.
Under our plan, that will change. The U.S. will now adjust its posture to also defend against any missile strikes, including cruise and hypersonic missiles. And we are, by the way, very advanced also on hypersonic technology and missiles. We will always be at the forefront of everything.
Fourth, we will recognize that space is a new warfighting domain, with the Space Force leading the way.
My upcoming budget will invest in a space-based missile defense layer. It’s new technology. It’s ultimately going to be a very, very big part of our defense and, obviously, of our offense. The system will be monitored, and we will terminate any missile launches from hostile powers, or even from powers that make a mistake. It won’t happen. Regardless of the missile type or the geographic origins of the attack, we will ensure that enemy missiles find no sanctuary on Earth or in the skies above.
(Der komplette Text hier)

The key thing that I would draw to your attention is the expansion of the coverage, and the policy statement that we’re going to defend the United States not only from ballistic missile attacks, but attacks from hypersonic weapons, hypersonic missiles and cruise missiles.
It’s a noteworthy change from the policy that existed before, but it’s a reflection of the threat environment, the security environment in which we are operating. (…)
This will be a robust response by the United States, a robust missile defense system that we go forward with and we’re going to do that not only with advancements in United States capabilities, preserving the capabilities that have been put out in the field or are in the process of being placed in the field, but adding new technologies and new approaches to missile defense, and we’re also going to do that, as mentioned in the Missile Defense Review at some length, with allies and with friends around the world.
We’ve had some very substantial and successful collaborative efforts with countries like Japan. For example, the Japanese minister of defense was here yesterday. That was a part of our discussion, the success that we have had and a willingness of both parties, in Japan and the United States, to explore potential expanded cooperation going forward.
We’ve had very successful efforts at NATO with our allies there, first a decision by the alliance to defend its territory and people against ballistic missile attacks; to defend its deployed forces against missile attacks, and we’re going to continue with that collaboration; and then, of course, we’ve had strong collaborative efforts around the Middle East, as well.

Why seems everyone so upset over one simple balloon?

Thank you @POTUS for the new $2.2 billion defense aid package. It's important to strengthen the 🇺🇦 Defense Forces. Together with 🇺🇸 we stand against terror! The more long-range our weapons are and the more mobile our troops are the sooner Russia's brutal aggression will end.