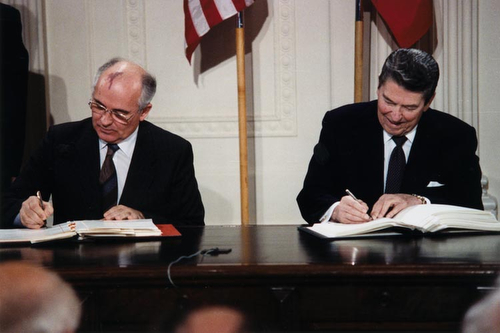 We remain concerned about Russia’s lack of respect for its international commitments, including the Intermediate-Range Nuclear Forces Treaty, the INF Treaty. This Treaty abolishes a whole category of weapons and is a crucial element of our security. Now this treaty is in danger because of Russia’s actions. After years of denials, Russia recently acknowledged the existence of a new missile system, called 9M729. Russia has not provided any credible answers on this new missile. All Allies agree that the most plausible assessment would be that Russia is in violation of the Treaty. It is therefore urgent that Russia addresses these concerns in a substantial and transparent manner.

The United States believes Russia is developing a ground-launched system in breach of a Cold War treaty that could allow Russia to launch a nuclear strike on Europe at short notice, but Moscow has consistently denied any such violation.
U.S. ambassador to NATO Kay Bailey Hutchison said Washington remained committed to a diplomat solution but was prepared to consider a military strike if Russian development of the medium-range system continued. (…)
“Counter measures (by the United States) would be to take out the missiles that are in development by Russia in violation of the treaty,” she added. “They are on notice.”

I was not talking about preemptively striking Russia. My point: 🇷🇺 needs to return to INF Treaty compliance or we will need to match its capabilities to protect US & NATO interests. The current situation, with 🇷🇺 in blatant violation, is untenable. https://t.co/dRaFoK8xlo

Question: And the second question, Secretary General Stoltenberg, he began with that Russia’s actions are in breach with the INF Treaty. Will you tell us tomorrow what will be discussed about this issue? Thank you very much.

Ambassador Hutchison: On the issue of your second question on the INF Treaty. We have been trying to send a message to Russia for several years that we know they are violating the treaty. We have shown Russia the evidence that we have, that they are violating the treaty. They are building a medium-range ballistic missile in violation of the INF. That is a fact which we have proven.

We have been asked by our allies to consult with them on this issue which we are going to do, which we have done, and we will be even more specific, I believe, in the next two days with the evaluations that are documented that we have uncovered from Russia’s actions on the INF Treaty in violation.

The United States does not want to withdraw from the treaty. We certainly don’t intend to violate the treaty. So we are asking our allies for their suggestions on a way forward that would bring Russia into compliance, because that is our goal. Russia in compliance.

But if Russia continues to say they are not violating when the evidence is clear that they are, then diplomacy needs to be strengthened, and we need to look for other ways to bring Russia to the table on this issue. It’s very important.

We will consult with allies. They have asked that we consult. The Europeans are very concerned about this and we understand why.

We ask Russia to come into compliance because America is being very careful to stay in compliance. But there will come a point in the future in which America will determine that it has to move forward with a development phase that is not allowed by the treaty right now. That’s not imminent, but we are laying down the markers so that our allies will help us bring Russia to the table.

Question: [Inaudible] in Norway. Ma’am, can you be more specific what kind of new information that you are bringing to the table regarding the breach of the INF Treaty? And more explicitly also, what kind of countermeasures that you are considering.

Ambassador Hutchison: The countermeasures would be to take out the missiles that are in development by Russia in violation of the treaty. So that would be the countermeasure eventually. We are trying not to do anything that would violate the treaty on our side, which allows research, but not going forward into development, and we are carefully keeping the INF Treaty requirements on our side, while Russia is violating.

I think it is very important that we have the capability to deter, not only for European defense but for American defense. We have an intermediate range risk from Russia as well. So I think it is important that we continue to do everything as an alliance to put pressure on Russia to come forward, and first of all admit that they are in violation, and then secondly, to stop the violations. Because they are clearly doing it, our allies know that, our allies have spoken at the Summit with a clear indication that Russia must stop these violations.

Question: Thanks, Ambassador. Lorne [Inaudible], Associated Press. Just to clarify a little bit when you said to take out the missiles that are in development, we are a little excited here. Do you mean to get those withdrawn? You don’t mean to actually take them out in a more [inaudible]?

Ambassador Hutchison: Well, withdrawing, yes. Getting them to withdraw would be our choice, of course. But I think the question was what would you do if this continues to a point where we know that they are capable of delivering. And at that point we would then be looking at a capability to take out a missile that could his any of our countries in Europe and hit America in Alaska. So it is in all of our interests, and Canada as well, I suppose. So we have our North Atlantic risk as well as the European risk.

We are not moving in that direction right now, but we are trying to tell Russia, and you know, the United States Congress told Russia last year when they passed the Armed Services Bill about this time last year, that we know they have violated the treaty and we are beginning the research capabilities that are allowed by the treaty to deter a medium-range ballistic missile.

So I think they are on notice. I think Congress has spoken. And I think it is time now for Russia to come to the table and stop the violations that we know they are making.