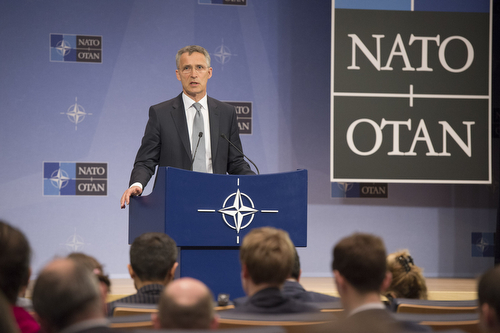 The Afghan forces are showing real courage, determination, and professionalism. And they are benefitting from our training, advice and assistance. But Afghanistan continues to face serious security challenges.

That is why today, ministers agreed to sustain the Resolute Support mission beyond 2016. Our military authorities will now address the details of the mission beyond 2016, including in the regions of Afghanistan. We also reviewed the financial support for the Afghan security forces. Total contributions to the Afghan National Army Trust Fund now exceed 1.4 billion US dollars.

I welcome the financial commitments made today by many Allies and partners, and I am confident that we will be able to announce at the Warsaw Summit firm commitments to continue funding for the Afghan forces throughout the year 2020. This is critical for Afghanistan’s ability to build sustainable security forces and ensure Afghanistan’s lasting security. Ministers also reaffirmed our long-term ambition for a strong political partnership and practical cooperation with Afghanistan.

I expect our Heads of State and Government to reiterate this commitment at the highest level in Warsaw. Foreign Minister Rabbani expressed Afghanistan’s appreciation for our support, and briefed ministers on the government’s continued reforms.

These include initiatives to fight corruption, protect human rights, including the rights of women, and advance the peace process. (…)

We have never said that it was going to be easy in Afghanistan and when we ended our combat mission at the end of 2014 and handed over the full responsibility to the Afghan Forces for security in Afghanistan, we underlined very strongly that this was a big task and that it in no way was going to be an easy task.
And we also listened very carefully when our military commanders briefed us in detail about the operations and the military challenges and the situation in Afghanistan during the meeting we just finished. But at the same time our military commanders also reported about the courage, about the determination and about the professionalism of the Afghan Army and Security Forces. It’s an army of 350,000 soldiers and police and they have been able to take responsibility for the security in Afghanistan and they have been able also to retake Kunduz in three weeks and they have been able to hold their ground and to perform in a professional way. They still need help, there’s still a way to go and that’s exactly why NATO is committed to continue to support them.
So we decided today to sustain our Resolute Support Mission beyond 2016, so we will continue to be there with NATO forces and partner forces to help, train, assist and advise the Afghan Army. We decided and we are in the process of mobilizing the necessary funds for continued financial support to the Afghan National Army and Security Forces and we will continue our political and practical cooperation with Afghanistan. So we are committed, we will continue to support them exactly because this is not an easy task but they have proven to be capable, professional and they have shown courage.