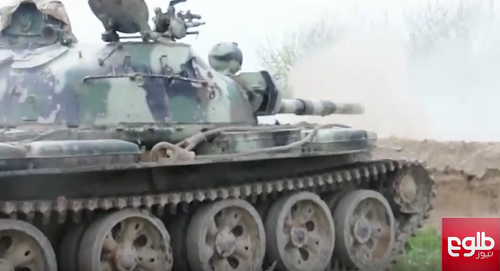 Afghan National Army (ANA) forces have intensified air and ground strikes against the Taliban operating in areas around Kunduz in their attempt to push the insurgents out of the province. (…)
Security officials in Kunduz have expressed satisfaction however over the outcome of ongoing military repression against the Taliban in Kunduz, citing that Taliban have suffered a major casualty toll since the operation was launched against the resurgent group a week ago.
They said that dozens of Taliban so far have been eliminated and wounded in the operation.

Taliban militants have resumed attacks on local police check posts in Dand-e-Shahabuddin area of Pul-e-Khumri, Baghlan, just weeks after a large-scale military operation was conducted in the area.
Local officials said the Taliban has, over the past week, continued to storm local police check points in the area. (…)
„Based on the reports that we have received, five militants have been killed and security forces have also recovered a number of weapons and two of our troops have been martyred— an army soldier and a policeman,“ said Abdul Satar Barez, the provincial governor.

Intense fighting and unprecedented casualties suffered by Afghan forces in 2015 have put U.S. and NATO efforts to train a self-sufficient force behind schedule, the new commanding general in Afghanistan told Reuters on Monday.
The impact of the violence in 2015, and the changing nature of the enemy Afghan troops face, will form an important part of an initial assessment of conditions in Afghanistan being conducted by new commander General John Nicholson.
„This intense period of combat interfered with the glide slope we were on. The assumptions we made about our timelines, we have to re-look based upon the high casualties they took,“ Nicholson said in his first interview since taking command of U.S. and NATO forces in Afghanistan last month.

If Putin were to use nukes in Ukraine, it is very likely that radioactive fallout would fall over Russian troops in the illegally annexed regions in eastern Ukraine he falsely claims to protect. 🤔

Ukrainians are pressing for longer-range missiles to strike deeper into Russian-held territory, including Crimea, raising questions about how aggressively the U.S. will support Kyiv’s war aims By ⁦@wstrobel, @mgordonwsj and me
⁩
https://www.wsj.com/articles/ukraines-appeal-for-longer-range-missiles-presents-fresh-test-of-biden-administration-support-11665083684?st=z4t52zunlodwa8y