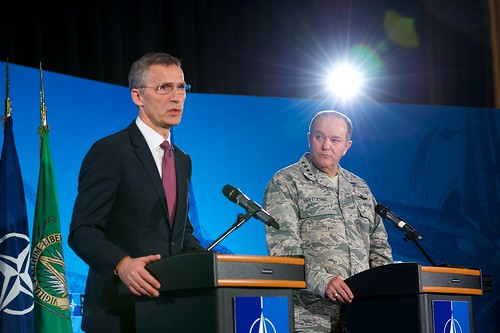 U.S. European Command needs more military assets, particularly in the area of intelligence and surveillance, if it is going to meet the growing security challenges it faces from Russia and other fronts, the top general in Europe said Thursday.
“There are critical gaps in our collection and analysis. Some Russian military exercises have caught us by surprise,” U.S. European Command’s Gen. Philip Breedlove told the Senate Armed Services Committee during testimony. “Getting this right requires more (surveillance, intelligence and reconnaissance), high-powered analytical support, and appropriate intelligence sharing with allies and partners.”
Breedlove cautioned that his command is undersized for an unpredictable threat environment that includes “a revanchist Russia,” Islamic State fighters on NATO’s doorstep in Syria, and instability across northern Africa with the flood of migrants into Europe.

Russia’s military may be taking advantage of a recent lull in fighting in eastern Ukraine to lay the groundwork for a new military offensive, NATO’s top commander told the U.S. Congress on Thursday.
U.S. Air Force General Philip Breedlove, the NATO supreme allied commander, said Russian forces had been seeking to „reset and reposition“ while protecting battlefield gains, despite a fragile ceasefire agreed in February. (…)
Pressed during the hearing, Breedlove acknowledged he could not predict Moscow’s next move but characterized its ongoing actions as „preparing, training and equipping to have the capacity to again take an offensive.“

The top U.S. commander for NATO says Russian forces have used a recent lull in fighting in Ukraine to reposition for what American military officers believe will be another offensive.
Gen. Philip Breedlove tells the Senate Armed Services Committee the United States has been taken by surprise by some of Russia’s moves in Ukraine and needs to bolster U.S. intelligence capabilities to better understand President Vladimir Putin’s intent in the region.

„Russian military operations in Ukraine and the region more broadly have underscored that there are critical gaps in our collection and analysis,“ US Air Force Gen Phillip Breedlove told lawmakers at a Senate Armed Services committee hearing in Washington.
„Some Russian military exercises have caught us by surprise, and our textured feel for Russia’s involvement on the ground in Ukraine has been quite limited.“
Breedlove said the US first learned through social media that a large Russian military exercise, billed as being tied to the Arctic, in fact had a much larger reach.

Compared to just one year ago, Europe faces a very different, and much more challenging security environment.one with significant, lasting implications for U.S. national security interests.

Our top concern is a revanchist Russia.

Russia is blatantly challenging the rules and principles that have been the bedrock of European security for decades.  The challenge is global. not regional. and enduring. not temporary.  Russian aggression is clearly visible in its illegal occupation of Crimea, and in its continued operations in eastern Ukraine.

In Ukraine, Russia has supplied their proxies with heavy weapons, training and mentoring, command and control, artillery fire support, and tactical-and operational-level air defense,. Russia has transferred many pieces of military equipment into Ukraine, including tanks, armored personnel carriers, heavy artillery pieces, and other military vehicles.

What we have seen over the course of the fight, was that when the Russian proxy offensive ran into trouble, Russian forces intervened directly to „right the course.“

Today on the ground, the situation is volatile and fragile.  Russian forces used the opportunities provided by the recent lull in fighting to re-set and re-position, while protecting their gains.  Many of their actions are consistent with preparations for another offensive.

The hope remains that both parties will fully implement an effective ceasefire as an important step toward an acceptable political resolution of the conflict, one that respects the internationally recognized border.

I am often asked, „Should the United States and others provide weapons to Ukraine?“  What we see is a Russia that is aggressively applying all elements of national power – diplomatic, informational, and economic, as well as military.  So my view,.is it would not make sense to unnecessarily take any of our own tools off the table.

But the crisis in Ukraine is about more than just Ukraine.    Russian activities are destabilizing neighboring states, and the region as a whole,..and Russia’s illegal actions are pushing instability closer to the boundaries of NATO.

We cannot be fully certain what Russia will do next, and we cannot fully grasp Putin’s intent. What we can do is learn from his actions,. And what we see suggests growing Russian capabilities, significant military modernization, and ambitious strategic intent.

We also know that Putin responds to strength., and seeks opportunities in weakness. We must strengthen our deterrence in order to manage his opportunistic confidence.

At the same time, Europe also faces the challenge of a surge in violent extremism.

European nations are rightly worried about foreign fighters returning home to Europe from the fight in Syria and Iraq, with new skills and malign intent.  Attacks like those in France. Belgium. and Denmark. are only likely to become more frequent.

Foreign fighters are part of a much broader pattern of insecurity to  Europe’s south, with roots in the Middle East and North Africa.  Transit routes are shared by violent extremists, organized criminal networks, and migrant populations fleeing difficult conditions in Libya and other under-governed places. The spread of instability into Europe, and the transnational terrorism we all face could have a direct bearing on the national security of the U.S. homeland.

EUCOM is working with European nations bilaterally and supporting NATO Alliance initiatives, to meet and counter this new and more complex security environment.

Based on the decisions made at the NATO Wales Summit last year, the Alliance is adapting in order to improve its readiness and responsiveness.  The Readiness Action Plan, or RAP, is well underway.  Our Allies are stepping up, making significant contributions that give them a real stake in the outcome.  The United States will have a key and sustained role to play in supporting and enabling these changes – especially in critical areas that are hardest for our Allies to provide, like lift, sustainment, and enablers such as intelligence, surveillance and reconnaissance.

At the same time, our own U.S. efforts in Europe remain essential.  Our leadership is perhaps more important now than at any time in recent history.

Since Russian troops illegally occupied Crimea last year, U.S. forces, under the banner of Operation Atlantic Resolve, have continued to take concerted steps to assure Allies of our commitment to their security and to Article V of the North Atlantic Treaty – the common defense cornerstone of transatlantic security.

EUCOM air, land, maritime and special operations forces have maintained presence in all three of our NATO allies in the Baltics; Poland, Romania, and Bulgaria, as well as in the Black Sea,..providing an array of capabilities including  airborne, armor, mobile infantry, light fighter, strike-fighter, advanced air, and maritime presence in addition to training, advising, and exercising with host nation forces.

You have made most of this persistent presence possible through your support for the European Reassurance Initiative, or „ERI.“  The assurance measures it supports enable the Alliance to remain strong and cohesive in this new security environment. In facing both of these serious challenges – to Europe’s east and to its south – EUCOM is working closely with many others,.our sister COCOMs, NATO partners as well as Allies, and other international organizations including the European Union.  There is plenty of work to go around, and our collaboration, and our unity, are essential.   EUCOM is also drawing heavily on great new efforts underway in the Department of Defense – not least the Defense Innovation Initiative, which applies cutting-edge approaches to some of the toughest challenges in our theater, like anti-access area denial.

The strong threat posed by Russia, and the growing challenge to the south, lead me to three areas where EUCOM could particularly use your help:

Our forward presence in Europe is the bedrock of our ability to assure Allies, to deter real and potential adversaries, and to be postured to act in a timely manner should deterrence fail.

It was our permanent presence in Europe that gave EUCOM the ability to respond immediately after Russian troops illegally occupied Crimea. Soldiers from the 173rd Airborne Brigade in Germany deployed to the Baltic States and Poland within 96 hours of receiving their mission. And our F-15s from Lakenheath, England began flying missions out of Poland within 18 hours of mission receipt.

That same permanent presence ensures that EUCOM can play a full array of essential supporting roles for other Combatant Commands – from neighboring AFRICOM and CENTCOM, to STRATCOM and TRANSCOM.

Rotational presence is not a substitute for permanent forward presence in building relationships or signaling our commitment.  A fully funded rotational presence can play an important role in helping meet the requirements in our theater – but only if it is heel-to-toe and properly resourced.

Since the end of the Cold War, our nation’s community of Russian area experts has shrunk considerably, and intelligence assets of all kinds have been shifted to the wars we’ve been fighting or to understanding potential future threats.

Russian military operations over the past year, in Ukraine and in the region more broadly, have underscored that there are critical gaps in our collection and analysis.  Some Russian military exercises have caught us by surprise, and our  textured feel for Russian involvement on the ground in Ukraine has been quite limited.

Earlier indications and warning – and the ability to better understand Moscow’s thinking and intent – are absolutely critical for avoiding future surprise and miscalculation, for deterring effectively, and for preparing to respond if required.   Getting this right requires more ISR, high-power analytical support, and appropriate intelligence-sharing with Allies and partners.  The same holds true for effectively waging counter-terrorism and counter-ISIL operations in and through the European theater.  A small investment in this capability could lead to a large return in our understanding of the complex challenges we face.

In the near term, EUCOM’s particular request is for your support for European Reassurance Initiative for Fiscal Year 2016.  Your support for ERI in 2015 demonstrated commitment to our Allies, increased our ability to shape the European Theater, and allowed EUCOM to build and sustain the capacity of our Allies and partners.

We understand that these reassurance measures come at a cost, and in the current budget environment, additional cost means making tough choices.  As a result of previous budget constraints, EUCOM has already assumed greater risk to our mission.  Specifically, our deployment timelines are longer, our preparations are less robust, and our fundamental ability to deter and defeat in a timely and effective manner is less sure than it was a decade ago.

As Secretary Carter testified recently, further reductions would damage our national security, and have a direct and lasting impact on our ability to protect and defend the nation in and from the European Theater.  Meanwhile, the security challenges in and around Europe are growing sharper and more complicated.

Your support for EUCOM’s mission, and your tireless efforts to chart a long-term path toward resourcing a strong national defense, are critical steps to ensuring the enduring ability of EUCOM, and DoD, to protect and defend this great nation.