In the north, Russian forces have now fully withdrawn from Ukraine to Belarus and Russia. At least some of these forces will be transferred to East Ukraine to fight in the Donbas.
Many of these forces will require significant replenishment before being ready to deploy further east, with any mass redeployment from the north likely to take at least a week minimum.
Russian shelling of cities in the east and south continues and Russian forces have advanced further south from the strategically important city of Izium which remains under their control.

The forty-fourth day of the heroic resistance of the Ukrainian people to a russian military invasion continues.
The armed forces of the russian federation continue their armed aggression against Ukraine. The enemy is being prepared for the offensive in eastern Ukraine.
The main efforts of the russian invaders continue to focus on the capture of Mariupol, the offensive in the area of the city of Izyum, breakthroughs in the defence of the Joint Forces in the Donetsk direction. In the South Buh direction, the russian enemy is trying to prevent the advance of our troops.
The Armed Forces of the republic of belarus carry out operational and combat training activities at training grounds throughout the country. Up to four battalion tactical groups have been involved to carry out tasks to strengthen the protection of the Ukrainian-belarusian border.
There is still a possibility of missile and air strikes from the territory of the republic of belarus on military and civilian infrastructure in Ukraine.
According to the available information, the so-called “volunteers” from among belarusians are being recruited from the territory of the republic of belarus to create new units of a private military company. The information is being clarified.
The enemy completes the restoration of combat capability of units of the Central Military District in the Bryansk and Kursk regions.
Separate units of the 6th, 20th All-Army, 1st Tank Army, Coastal Troops of the Baltic and Northern Fleets carry out operational equipment of the territory. The main focus is on the rehabilitation of railway sections from Kupyansk to Kharkiv, Izyum and Svatove. For this purpose, units of the railway troops of the 38th separate railway brigade of the Western Military District from Yaroslavl were involved.
In the Kharkiv direction, the russian enemy continues to blockade the city of Kharkiv. To prevent the advance of our troops, the invaders put up minefields.
In the temporarily occupied city of Izyum, representatives of the so-called „DPR“ perform the functions of the local „police“, carry out illegal checks of documents, searches of persons and premises of the local population.
Units of the occupying forces are concentrating their efforts on taking control of the settlements of Popasna and Rubizhne and establishing control over the city of Mariupol. Assault operations continue in most areas.
The enemy continues to launch air strikes and shell civilian infrastructure, including the use of multiple rocket launchers. Such activities have been recorded in the districts of Kreminna, Severodonetsk, Novotoshkivske, Popasna, Novozvanivka, Sukha Balka, Novoselivka Druha, Stepne, Troitske, Novobahmutivka, Marinka and Solodke.
In the areas of the settlements of Rubizhne, Popasna, Nyzhne, Novotoshkivske, Zolote and Borivske, the occupiers tried to carry out assault operations, but were unsuccessful.
In the territory of Donetsk and Luhansk oblasts, seven enemy attacks were repulsed in the past 24 hours, four tanks, two artillery systems, ten armoured units and eleven enemy vehicles were destroyed.
Air Force aircraft of the Armed Forces of Ukraine continued to strike at places where russian enemy troops congregated.

At least one Tochka-U rocket struck the Kramatorsk train station, according to Oleksandr Kamyshin of the state railway company. He said the attacked damaged infrastructure and forced the station closed. Nearby Slovyansk just a few km north is still working. 📸 via Kamyshin pic.twitter.com/cCiWefGPA3

A Russian strike on a train station in Kramatorsk, which had been a main point of evacuation for thousands of people trying to flee the embattled eastern regions of Ukraine, left “dozens” dead and injured on Friday morning, according to the governor of the Donetsk region.
“Thousands of people were at the station during the missile strike, as residents of Donetsk region are being evacuated to safer regions of Ukraine,” the governor, Pavlo Kyrylenko, said in a statement posted to the Telegram social media app.

Russian Defence Ministry denies statements made by Kiev regime about an alleged missile attack on the railway station in Kramatorsk, Donetsk Region
▫️All statements by representatives of the Kiev nationalist regime about an alleged missile attack by Russia on the railway station in Kramatorsk city on April 8 are a provocation and are absolutely untrue.
▫️The Russian Armed Forces did not have or plan to carry out any firing missions in Kramatorsk city on April 8.
▫️We emphasize in particular that Tochka-U tactical missiles, the wreckage of which was found near the Kramatorsk railway station and published by eyewitnesses, are used by Ukrainian Armed Forces only.
▫️On March 14, 2022, a similar Tochka-U missile of Division of 19th Separate Missile Brigade of the Ukrainian Armed Forces struck the centre of Donetsk, killing 17 people on the spot and injuring another 36 civilians.

Russia is now using older Tochka-U missile launchers against Ukraine, as seen in Desnyanka, 40 km from the border with Belarus.

It typically remains intact when a cluster warhead is used. pic.twitter.com/9GObiqXdGM 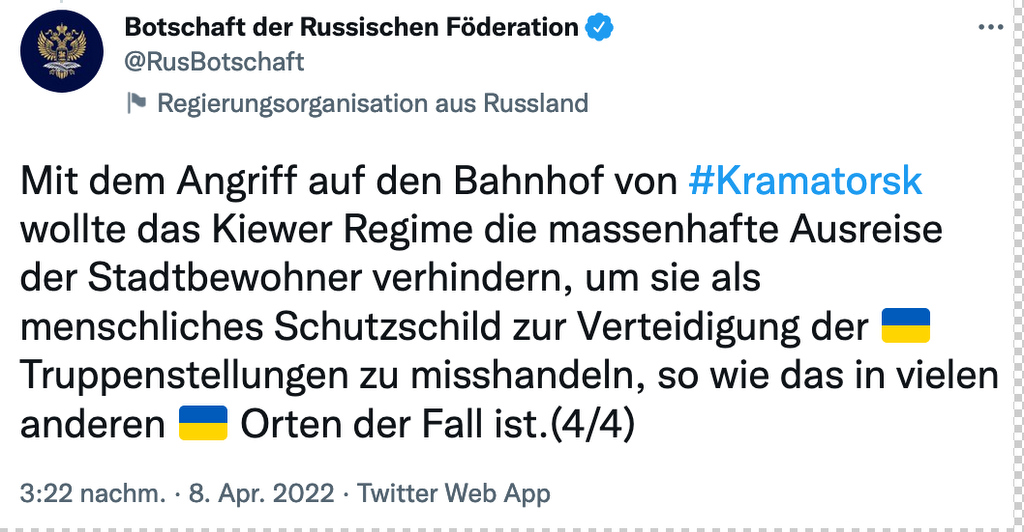 The armed forces of the russian federation continue to conduct full-scale armed aggression against Ukraine. The russian enemy is being prepared for an offensive in the east of Ukraine.
The russian occupiers continue to destroy civilian infrastructure by launching missile and artillery strikes at railway junctions and roads, stations, residential areas and places of evacuation of civilians from areas of hostilities.
In the Donetsk and Tavriya directions, the russian enemy continues to increase the number of troops.
The russian occupiers did not abandon attempts at offensive in the direction of Popasna and Severodonetsk. They are not successful.
In the Pivdennobuzhsky direction, the russian enemy fought in the area of the settlement of Oleksandrivka. russain enemy tried to carry out fire in order to inflict damage on units of the Armed Forces of Ukraine in the area, but did not reach the goal.
In the Slobozhansky direction, the russian enemy continued a blockade of the city of Kharkiv, shelling residential neighborhoods using artillery, including multiple rocket launchers and large-caliber mortars.
The russian occupiers completely withdrew their troops from the Sumy region to the russian federation.
The russian enemy has significant problems with the recruitment of military units that suffered significant losses during hostilities in Ukraine. According to available information, more than 80 percent of the russian personnel of some units involved in the war do not want to take part in further hostilities. The commanders of the occupying russian forces forbade the release of servicemen whose contracts had expired before the end of the so-called „special military operation“.
In the temporarily occupied territories, the russian enemy continues to violate international humanitarian law by committing illegal acts against civilians, including looting, theft of vehicles and detention of Ukrainian citizens.
The russian occupying authorities in the temporarily occupied territory of Donetsk region have received instructions from russian curators to return to these territories people who left for the russian federation in January-February 2022. According to the instructions of local administrations, citizens must return to the settlements at the place of registration/residence after two months of stay in russia. 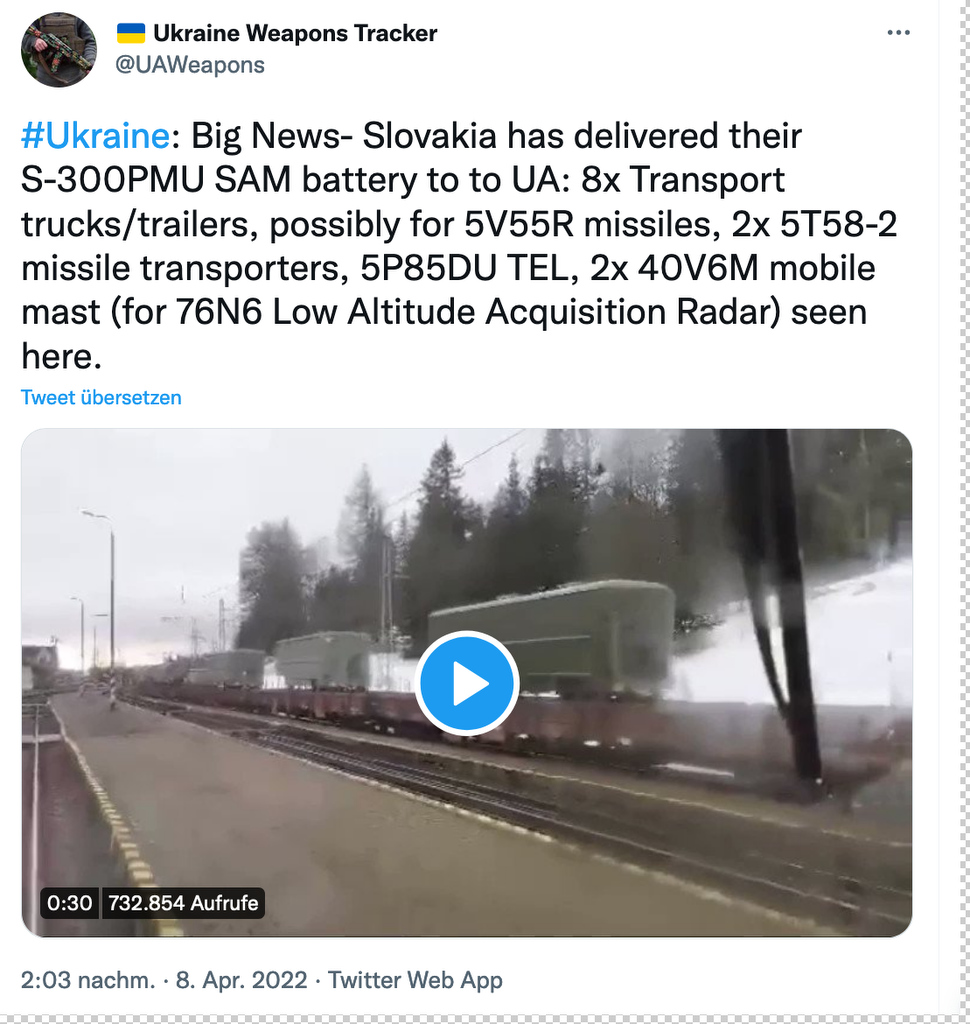 I salute the generosity of the Slovak government in providing an S-300 air defense system – a critical defensive capability – to Ukraine. It’s a strong testament to how determined Ukraine’s neighbors are to help the Ukrainians defend themselves against Russia’s unprovoked invasion of their homeland. Of course, the United States will continue to coordinate with our Allies and partners to support the needs of the Ukrainian military and people. We also recognize Slovakia for its extraordinary humanitarian assistance efforts and for hosting thousands of Ukrainian refugees.
At my direction, and at the invitation of Slovakia, U.S. European Command will reposition one Patriot missile system, manned by U.S. service members, to Slovakia. We expect this battery and its crew to arrive in coming days. Their deployment length has not yet been fixed, as we continue to consult with the Slovak government about more permanent air defense solutions.
This deployment of Patriot capabilities to Slovakia aligns perfectly with our previous efforts to bolster NATO’s defensive capabilities and to demonstrate our collective security requirements under Article 5 of the NATO treaty. It complements the NATO multinational battlegroup in eastern Slovakia, which includes air defense elements from Germany and the Netherlands.
Again, I thank the government of Slovakia for their willingness to assist Ukraine in its long-range air defense needs. This is just another example of the strength of our Alliance, and how President Putin’s actions have brought about the very strengthening of NATO that he claimed he was trying to prevent. Every step we take is intended to deter aggression and reassure our Allies.

Russian forces in Lyman are now surrounded, a spokesman for the Ukrainian armed forces has confirmed to us. https://www.washingtonpost.com/world/2022/09/30/russia-ukraine-war-latest-updates/

In 2019, I was under surveillance by the Orbán government for at least 7 months with #Pegasus. Same happened to my @direkt36 colleague @AndrasSzab & at least four other reporters.

Here's my new investigation into how the spyware was purchased & operated:
https://www.direkt36.hu/en/feltarulnak-a-pegasus-kemszoftver-beszerzesenek-rejtelyei/