Before I go in with the sort of situational update as we see it, I know that the first question I’m going to get asked is about this order by Mr. Putin to change his nuclear posture. We — so, again, I’m on background to Senior Defense Official. We have no reason to doubt the validity of these reports. We believe that this is not only an unnecessary step for him to take but an escalatory one, unnecessary because Russia has not ever been under threat by the west or by NATO and certainly wasn’t under any threat by Ukraine. And escalatory because it is clearly potentially putting at play forces that could that if there’s a miscalculation could — could make things much, much more dangerous.

Now, back to what we’re seeing. We, overnight over the last time since we talked, we do continue to see Russian momentum slowed; they continue to face a stiff resistance. We continue to observe that they have experienced fuel and logistics shortages. This is most particularly acute in their advanced on Kharkiv. Although we believe that they are facing some logistics challenges as well on their advanced down north to Kyiv. We still, as of this morning, have no indication that the Russian military has taken control of any cities. But clearly, that continues to be, in our view, their goal. We have seen reports that, as I said yesterday that some reconnaissance elements were in Kyiv and, and we’ve seen reports that we have no reason to doubt, that some of these Recon elements are actually wearing Ukrainian uniforms to try to disguise themselves and what they’re doing.

But they have been in some cases identified by locals, and by the Ukrainian military, again, right out of the Russian playbook here. Geographically, we assess that the Russian forces still remain about 30 kilometers from the city center in Kyiv. So, when I say a number like that, I’m referring to the city center, not the suburbs, but 30 miles from the city center, 30 kilometers excuse me from the city center. Down in the south, where they have had a little bit more success, and aren’t facing quite the same sustainment challenges that they are in the north, we talked about this amphibious assault the other day; we believe that assault now has drawn those forces combined with ground forces that — that have also moved up towards Mariupol that they’ve — they’ve drawn themselves to within about 50 kilometers from Mariupol from the city center of Mariupol. And our assessment is that Mariupol is defended. And the Ukrainians will put up a resistance there. That’s the assessment.

The airspace over Ukraine is still contested. And that means that the Ukrainians are still using both aircraft, and their own air and missile defense systems, which we believe are still intact and still viable, though they have been, as I said yesterday, there’s been some degradation by the Russians.

As of this morning, we assess that they have launched now more than 320 missiles. Again, the majority of them are short-range ballistic missiles. And we have seen some indications that they have experienced failures in some of these launches, that not all missiles have launched effectively. I can’t give you a hard number on that. But it’s not the majority. But we do believe that some number of their launches have not been successful. The other thing that’s a little bit, well, not a little bit, is something that’s more concerning today is that we have indications that they are adopting siege tactics around the city of Chernihiv. Chernihiv sits just to the northeast of Kyiv. So, it’s along that line.

Q. You mentioned the military material to be sent to Ukraine in the value of several hundreds of millions of euros. How do you envision to get this material into Ukraine? Are you not afraid that the moment it crosses the border it will be attacked by the Russians? …

Borrell:  We are going to supply arms and even fighter jets. We are not talking just about ammunition; we are providing the most important arms to go to war.
Minister Kuleba has been asking us that they need the type of fighter jets that the Ukrainian army is able to operate. We know what kind of planes and some Member States have these kinds of planes.
For the time being the Western borders of Ukraine are still open. We are going to provide them not only with these 500 million [under the European Peace Facility]. Apart from that [the European Peace Facility], you have to include all the material that several Member States are deciding to provide by themselves. This material is already on its way. 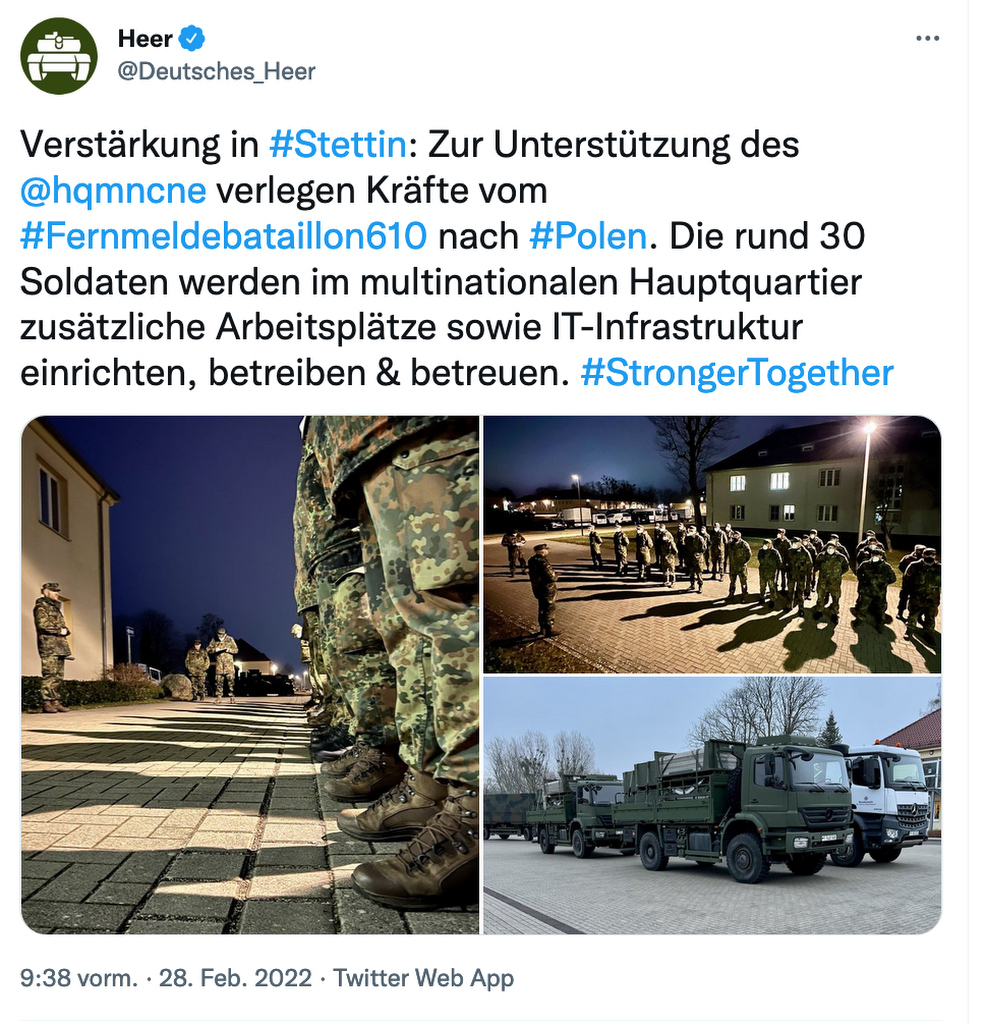 So day five, some things remain unchanged. We still anticipate — we still believe in the air domain that airspace over Ukraine remains contested. The Russians have not achieved air superior — air superiority over the whole country. Ukrainian air defenses remain intact and viable both in terms of aircraft and — and missile defense systems, and they’re engaged.

In the maritime domain, really nothing to update you from yesterday, no — no new amphibious assaults to report. There are no significant naval activity to — to speak to.

Still heavy fighting in and around Kharkiv. Kharkiv remains an objective for them, and — and in the south, they continue to try to advance on Mariupol. The — the — the current belief is that if they can get Kharkiv and then get Mariupol, if you draw a line between those two cities, you can see that that would allow them to section off the eastern part of Ukraine and — and fix whatever Ukrainian armed forces are in the east and keep them there. Again, that’s — that’s what — what it appears to be — for — for us, appears to be their — their planning assumptions. But again, they haven’t taken Kharkiv and they haven’t taken Mariupol yet.

On the nuclear thing, I mean, obviously, we’re still monitoring and watching this as closely as we can, given President Putin’s announcement yesterday. I — I — you know, I don’t believe we’ve seen anything specific as a result of — of the direction that he gave, at least, not — not yet in — in — in terms of appreciable or — or — or noticeable muscle movements. And again, what I said yesterday is we — we remain comfortable and confident in our own strategic deterrence posture.

On the — on the air — on the air issue, the air domain, I mean, there are parts of — of — of Ukraine that at — at — at one point or another the Russians will have dominance, and then at another point, another, the Ukrainians will have dominance. I mean, it’s — it’s very shifting. I couldn’t give you, you know, a — a — spots on the map where I’d — you know, where — where I could say definitively one or the other has some sort of dominance. It’s contested airspace, and it’s a very dynamic air — airspace right now. And yes, we have seen the Russians, since the very early hours of this, target Ukrainian air and missile defense capabilities, but we still believe today, on day five, that the Ukrainians have significant air and — and — and missile defense capabilities available to them. And it’s — you can see it for yourself just in the fact that — that that airspace is contested. The Russians have not been able to dominate the airspace. But of course, they’re — we would expect them to try to — to target those defensive capabilities for — for the Ukrainians, and I — I suspect we’ll continue to see the — those elements being targeted. …

We still believe that Kyiv is an objective for them. It’s impossible to speculate as to how they may or may not change their plans going forward. We don’t have perfect understanding of plans that they — that they had in place to begin with.

All we can do is tell you what we’re seeing in real-time. We have every indication that they still want to take Kyiv; that they are advancing on the ground and trying to get closer to Kyiv to do that; that they clearly want to encircle Kyiv from multiple locations, not just the north, but to move around it as well from the south. And how they do that and how they execute those plans, I mean, I think we’re just — we’re going to have see in real-time here.

After a Fumbled Start, Russian Forces Hit Harder in Ukraine