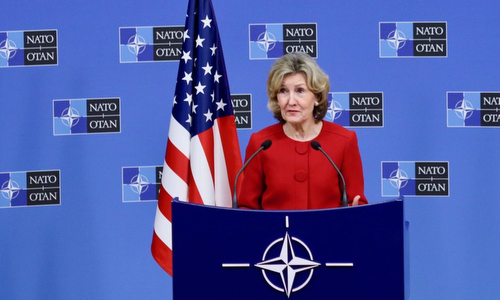 Press: Hello, Mathias Kolb, Suddeutsche Zeitung.
Ambassador Hutchison, a report by Germany News Agency DPA from today which quotes you that you have an assessment, it’s again about Merkel and the German government and defense spending, that according to your assessment Merkel is working on bringing a new partner into the coalition to increase defense spending. Could you elaborate a little bit more on where this information comes from, and who the new partners could be? Because I think the only partner could be the Greens who are also very reluctant to do more defense spending. It would be great if you could give some clarity. Thanks.

Ambassador Hutchison: I don’t know where that is coming from. I’m sorry. I can’t answer.
(…)

Press: Helen Maguire, I’m from the German Press Agency DPA, and I just wanted to follow up on my colleague’s question, maybe give you a chance to clarify.

If you don’t mind, I will quote what you said earlier today, Ambassador, in the telephone briefing on the Ministerial. This is from the transcript and it says you said, “I think that Germany is one of those divided governments that I mentioned where there is a coalition put together and they are trying to go in that direction, in that right direction I know,” this is obviously on defense spending, “and they must. We need more from Germany because they have the strongest economy in Europe. They need to do more. They say they need to do more so I know that the will is there of Chancellor Merkel and her part of the coalition, and I think she is working to bring others in so that they can have that budget that will give us more of the capabilities that Germany can provide.”

Would you be able to clarify? Maybe that was misunderstood in some way. Thank you very much.

I don’t mean bringing in new people, I mean taking the coalition as it is and urging them to do what the government has committed to do. I think maybe that was the question before that I didn’t understand bringing in new people. It’s not new people necessarily, it is, and I think here it’s very important for us to say that our publics need to know the importance of providing security now. We are in a world of risk. Risk from terrorism, being exported out of other countries into our countries to disrupt our way of life. We are at risk from a Russia that is doing very bold and malign things. They’re attacking hybrid, cyber, they’re trying to sow discontent in so many of our countries. So educating our publics and our coalition governments about the need for more spending, more capabilities, more mobility, more deterrence efforts is very important.

So when I say bring more people in, I think that’s the public, I think it is the partners in coalition governments throughout our alliance. And it is making sure that our publics understand, there is risk out there. This is a very unsafe world. We’re looking at the present and we’re looking at the future not being much better. In fact we’re looking at future in which there is more capability, more technology, for attacks and malign influence than maybe we’ve had in our histories, our joint histories. And we’ve got to be prepared to protect our publics from those bigger weapon systems, those more technologically advanced systems that would sow division.

And so yes, we need more people to understand in all of our publics the importance of this security umbrella which means we’ve got to have the capability to deter a big adversary or a non-state adversary that uses tactics that are inhumane.

So yes, we need to bring more people in in our publics, in our coalitions and in all of our efforts to strengthen this alliance by having the capability so that our adversaries know that we can do more damage to them if they try to hurt our populations.

In case you're wondering how big Finland is exactly, a few points of comparison.

Speaking at today’s CSTO summit, Putin said that NATO membership alone for Finland and Sweden poses no threat to Russia, but Moscow will respond in kind to any buildup of military infrastructure in these nations. Russia’s response will depend on the buildup.

STOCKHOLM/KYIV, May 16 (Reuters) - Vladimir Putin appeared to climb down on Monday from Russia's objections to Sweden and Finland joining NATO, saying Moscow had no issues with them entering the military alliance they now aim to join in reaction to his invasion of Ukraine.