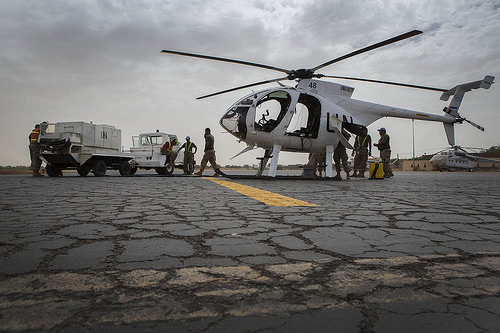 The security situation significantly deteriorated. Since mid-July, the situation in Kidal has worsened, with armed clashes between CMA and the Platform as both groups vied for control of Kidal. Meanwhile, asymmetric attacks continued against MINUSMA and international forces, notably in the Gao, Kidal and Timbuktu regions. Attacks against the Malian defence and security forces almost doubled as compared with the previous reporting period.
Violence spiked even more during the reporting period. Violent extremist
groups and terrorist elements conducted 75 attacks (44 against Malian defence and security forces, 21 against MINUSMA and 10 against Barkhane), as compared with 37 attacks in the previous reporting period (23 against Malian defence and security forces, 11 against MINUSMA and 3 against Barkhane). These figures represent an increase of 102.7 per cent for all attacks. Casualty figures also increased, with 15 MINUSMA and MINUSMA-related personnel deaths (6 peacekeepers, 1 civilian personnel member and 8 contractors), another 34 injured (25 peacekeepers, 2 civilian personnel and 7 contractors). In the previous reporting period, four peacekeepers were killed and five injured. Similarly, 39 members of the Malian defence and security forces were killed and another 44 were wounded, compared with 33 killed and 54 injured in the previous reporting period. As regards international forces, no French soldiers were killed, while 17 were injured, compared with 2 injured during the previous reporting period.
Most asymmetric attacks were claimed by the Group for the Support of Islam
and Muslims. Meanwhile, the violent extremist splinter group, Islamic State in the
Greater Sahara, which is currently operating in the Mali-Niger border area, seemed to be exploiting existing inter-community tensions. On 1 June, a mortar attack against the bases of MINUSMA and the French armed forces in Timbuktu city, resulted in the death of one peacekeeper and the wounding of three Malian and eight French peacekeepers, as well as damage inside the camp. The attack was the fourth such attack in Timbuktu in four weeks. On 8 June, assailants launched 15 mortar shells at the MINUSMA camp in Kidal town, and killed four and wounded five peacekeepers in an attack on a Mission position in the city. On 18 June, 5 people died and 10 were wounded in an attack on a hotel near Bamako. On 14 August, armed assailants attacked a MINUSMA camp in Douentza, Mopti region. One peacekeeper and one member of the Malian armed forces were killed, while another peacekeeper was injured. On the same day, unidentified armed men attacked the MINUSMA headquarters in Timbuktu city. Four assailants infiltrated the compound, before being killed. Five security guards, one national contractor and one Malian gendarme died in the attack, and another six MINUSMA peacekeepers were wounded. (…)
The deteriorating security situation in Mali further negatively impacted the dire humanitarian situation. Given the limited presence of State authority and the lack of sustainable development gains in central and northern Mali, humanitarian needs persisted.

The force level of 13,289 military personnel comprises 40 military observers, 486 staff officers and 12,763 contingent personnel. As at 11 September, 11,273 personnel, or 85 per cent of the authorized strength, had been deployed. Women account for 2.2 per cent of military personnel. (…)
While little progress was made on force generation, important steps were taken in preparation for the deployment of key assets to improve the force’s mobility, intervention and deterrence capabilities. The advance party of the quick reaction force arrived in Mopti on 10 August, while the main body and helicopter detachment are scheduled to deploy later this year. A construction party arrived in Gao in June to begin the camp construction which would accommodate one combat convoy company, with works scheduled to be completed in October. The
deployment of at least two other combat convoy companies is planned for October and December. Progress was made in generating pledges for an explosive ordnance disposal company, a special forces company, airfield support units and armed and military utility helicopter units. The lack of armoured personnel carriers remained a major obstacle to the Mission’s operations; meanwhile some troop-contributing countries made progress in reducing their shortages. MINUSMA continues to require an intelligence, surveillance and reconnaissance company for Kidal.
Insufficient contingent-owned equipment and the self-sustainment capabilities of some infantry units also remain a concern. The lack of air assets compromised the Mission’s response across its area of responsibility, including in support of its protection of civilians mandate. Only three out of seven helicopter units, or six out of nine attack helicopters and four out of fourteen medium utility helicopters, are deployed or operational. The medium utility helicopter unit deployed to Kidal, which was damaged in the attack of October 2016, was unable to resume operations and is scheduled to be repatriated by the beginning of October. The military fixed-wing air transport unit based in Gao, which was damaged in the attack of November 2016, was unable to resume operations and will be repatriated. MINUSMA has deployed commercial air transport resources to address the support requirements in each location. Regrettably, the Mission lost an attack helicopter and its crew members during a crash on 26 July.