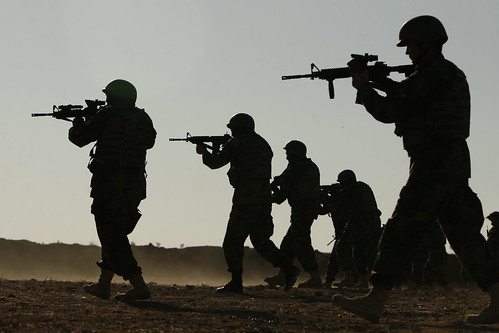 The Taliban said on Wednesday that they will start their spring offensive this week, an annual campaign in their war against the Afghan government.

In a statement emailed to media, the group said the offensive — dubbed „Azm“ or perseverance in Dari and Arabic — will begin on Friday. The Taliban said their Islamic Emirate of Afghanistan is „determined to prolong the ongoing jihad,“ or holy war.
This fighting season is the first year the insurgents will face just Afghan forces on the battlefield after the withdrawal of most international combat troops at the end of last year.

O our devout countrymen and Mujahidin!

Due to your previous thirteen years of pious Jihad, the crusader invaders led by America were compelled to withdraw a major part of their invading forces from Afghanistan.

Though the occupying forces have announced the termination of their military operations inside Afghanistan but in reality they have preserved the control of our land and air-space under the spiteful ‘Bilateral Security Agreement’ and similarly, their occupation in political, cultural, educational, propaganda and other spheres has not ceased. The foreign occupiers are still carrying out drone strikes and night operations against the civilian people and have absolute control over the military and fighting command and control system of the heterogeneous regime under the so called ‘Bilateral Security Agreement’.

Since our vigilant people have been expert in detecting the occupation and they can easily discern it in all its visible and invisible forms therefore the foreign occupiers cannot divert the devout Afghan nation from their mission of Jihadi struggle by merely changing their fighting tactics. If the foreign occupiers really want to relieve themselves from this nuisance of fighting, they should immediately withdraw all their remaining forces and military, intelligence and special operation units from Afghanistan and should abandon both the illegitimate occupation and interference in the affairs of our country.

For the complete liberation of our beloved homeland from the yoke of foreign occupation and for the implementation of Islamic rule throughout the country, the Islamic Emirate is determined to prolong the ongoing Jihad against the foreign invaders as well as their internal stooges.

For this purpose, the Islamic Emirate is going to launch the spring operations under the inspirational name of ‘Azm’ (i.e. Resolve, Perseverance or Determination) with the chants of ‘Allah-o-Akbar’ (Allah is the Greatest) at 5 a.m. on the following Friday, 5th Rajab 1436 A.H (lunar), 4th Taurus 1394 A.H. (solar), 24th April 2015.

Hope that Allah Almighty will bestow our Muslim masses with an even stronger Jihadi ‘Azm’ and fervor in these operations against the infidels and their debaucheries. As 5th of Rajab (seventh lunar month of Islamic calendar) has been decided the inaugural date for these operations as this was the date of a historic victory for the early Muslims and an admonitory defeat for the western infidel forces on fifteenth year of Hijra (i.e. migration) in the battle of ‘Yarmouk’. We trust in Allah Almighty that these spring operations will be a fatal blow for all western infidel forces who invaded our country.

The main targets of these operations called ‘Azm’ which have been planned by the Leadership of the Islamic Emirate and the professional and skilled specialists of our ‘Military Commission’ will be the foreign occupiers especially their permanent military bases, their intelligence and diplomatic centers, officials of the stooge regime, their military constellations, especially their intelligence, interior ministry and defense ministry officials and other pernicious individuals. As usual, advanced fighting techniques will be exercised in these military operations of ‘Azm’. Martyrdom seeking attacks for the devastation of infidels, infiltration attacks among the enemy ranks, attacking the huge and relatively fortified centers of the enemy with heavy and long-range missiles, confrontational attacks against the already demoralized mercenary forces of the enemy and guerrilla attacks in all major cities are among the main tactics of these operations.

Mujahidin will execute their plans with great care and deliberation in all parts of the country during these spring operations called ‘Azm’ in which top priority will be given to safeguarding and protecting the lives and properties of the civilian people. And those Mujahidin who are negligent and careless in preserving the lives and properties of the civilian people and their operations result in the civilian losses or casualties, will be panelized according to Jihadi and Sharia rules and regulations. Similarly, consistent with its policies, the Islamic Emirate has never and will never target religious and other educational institutions like mosques, madrassas, schools, universities, health centers like clinics and hospitals, public buildings and other projects of public welfare.

The Islamic Emirate reverently anticipates from the whole Muslim nation to even more inclusively support Mujahidin for the success of these virtuous operations as they have done in the past. Similarly they are advised to remain at a considerable distance from the military constellations and centers so that they are not hurt while operations are executed. The Islamic Emirate is quite considerate in resolving your issues in the light of Islamic Sharia system and in the prevailing circumstances, if some welfare organizations or individuals want to help the masses, we will support their activities according to our procedures in the light of Islamic rules and regulations.

Similarly, we once again call upon all the military and civilian officials and workers of the stooge regime to depart the invaders for fulfilling their Islamic and Afghani obligation and to unite with their own Muslim people. Mujahidin are ready as ever to provide secure and peaceful living conditions for all the officials and individuals who quit the enemy ranks.

In the end, we want to remind our courageous Mujahidin that Jihad is a type of worship and the purity of intention plays a crucial role in it. Instead of status, fame, boon or any other mean worldly benefits, the objective of your Jihad should be wholly and solely the elevation of the Word of Allah. Religious obligations, the training rules and regulations of Jihad and its procedures should be strictly observed. You should obey your elders and leaders. You should deal with and respect your masses just like a part of your own body. Live like brothers among yourselves. Do not be deceived by the enemy propaganda. Remain steadfast and consistent in adversities.

(Archivbild 2010: Commandos with the 9th Commando Kandak move toward and fire on targets during a rifle familiarization drill at a rifle range near their compound in Herat, Afghanistan, Nov. 6, 2010. The commandos, having just recited their Commando creed in August, are still learning new tools of the trade to include advanced rifle techniques as well as entry level pistol training – Resolute Support Media via Flickr unter CC-BY-Lizenz)

Turkey's president has suggested his country might approve Finland's application for NATO membership before taking any action on Sweden's. Turkey has accused the government in Stockholm of being too lenient toward groups it deems as terror organizations. https://apnews.com/article/politics-turkey-government-sweden-19646f571f3adf05b12b29f215855905?taid=63d6ddee3243920001332cd6&utm_campaign=TrueAnthem&utm_medium=AP&utm_source=Twitter

New from us: Israel strikes Iran in operation attempted to contain Tehran by @DionNissenbaum and @benoitfaucon and me https://www.wsj.com/articles/israel-strikes-iran-amid-new-international-push-to-contain-tehran-11675004979