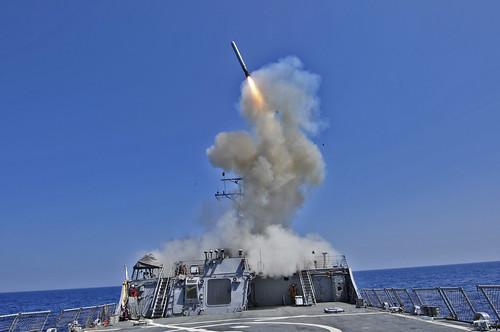 TAMPA, Fla., Sept. 22, 2014 – The Department of Defense released the following statement from Pentagon Press Secretary Rear Adm. John Kirby today:
„I can confirm that U.S. military and partner nation forces are undertaking military action against ISIL terrorists in Syria using a mix of fighter, bomber and Tomahawk Land Attack Missiles.“
„Given that these operations are ongoing, we are not in a position to provide additional details at this time. The decision to conduct theses strikes was made earlier today by the U.S. Central Command commander under authorization granted him by the commander in chief. We will provide more details later as operationally appropriate.“

The US stepped up its war against the Islamic State militant group, launching air strikes on targets in Syria for the first time.
The Pentagon press secretary, rear admiral John Kirby, confirmed that the US and allied nations sent fighter jets, bomber aircraft and Tomahawk missiles in an operation against Isis that he described as “ongoing”.
A US official, speaking on condition of anonymity, indicated that Raqqa, a Syrian stronghold of Isis, was among the targets of the operation, which began in the early hours of Tuesday morning local time.

American jets began bombing ISIS targets in Syria early Tuesday, raising U.S. involvement in the war-torn country and sending a forceful message to the terror group.
The airstrikes focused on the ISIS stronghold of Raqqa, a U.S. official told CNN, though other locations were hit as well. (…)
They’re the first strikes against the terror group inside the country since President Barack Obama’s announcement this month that he was prepared to expand the American efforts beyond targets in Iraq.

Asked if the policy of strategic ambiguity toward Taiwan was dead, Biden says: "No."

Asked to elaborate, he says: "No."

Asked if he would send troops to Taiwan if China invaded, he says: "The policy has not changed at all.”

U.S. President Biden: no change to policy of strategic ambiguity on Taiwan http://reut.rs/3GaojoN