The UK will supply scores of artillery guns, hundreds of drones and hundreds more anti-tank weapons to Ukraine in the coming weeks, the Defence Secretary has revealed. (…)
More than 20 M109 155mm self-propelled guns and 36 L119 105mm artillery guns will soon arrive from the UK, Defence Secretary Ben Wallace announced in an update to Parliament today. Counter-battery radar systems and more than 50,000 rounds of ammunition for Ukraine’s existing Soviet era artillery will also follow, he added. (…)
The UK will also send more than 1,600 more anti-tank weapons in the coming weeks, along with drones, including hundreds of loitering aerial munitions.
So far 6,900 NLAW, Javelin, Brimstone and other anti-tank weapons, as well as 16,000 artillery rounds, six Stormer vehicles fitted with Starstreak anti-air missile launchers and hundreds of missiles have been sent to Ukraine.
The UK has also supplied maritime Brimstone missiles, multiple launch rocket systems, 120 armoured fighting vehicles and large quantities of non-lethal aid including more than 82,000 helmets, 8,450 sets of body armour and over 5,000 night vision devices.

Russian and separatist forces continue to attempt small scale assaults along the Donbas front line. Russian forces are likely closing in on Ukraine’s second biggest power plant at Vuhlehirska, 50km north-east of Donetsk.
Russia is prioritising the capture of critical national infrastructure, such as power plants.
However, it is probably also attempting to break through at Vuhlehirska, as part of its efforts to regain momentum on the southern pincer of its advance towards the key cities of Kramatorsk and Sloviansk. 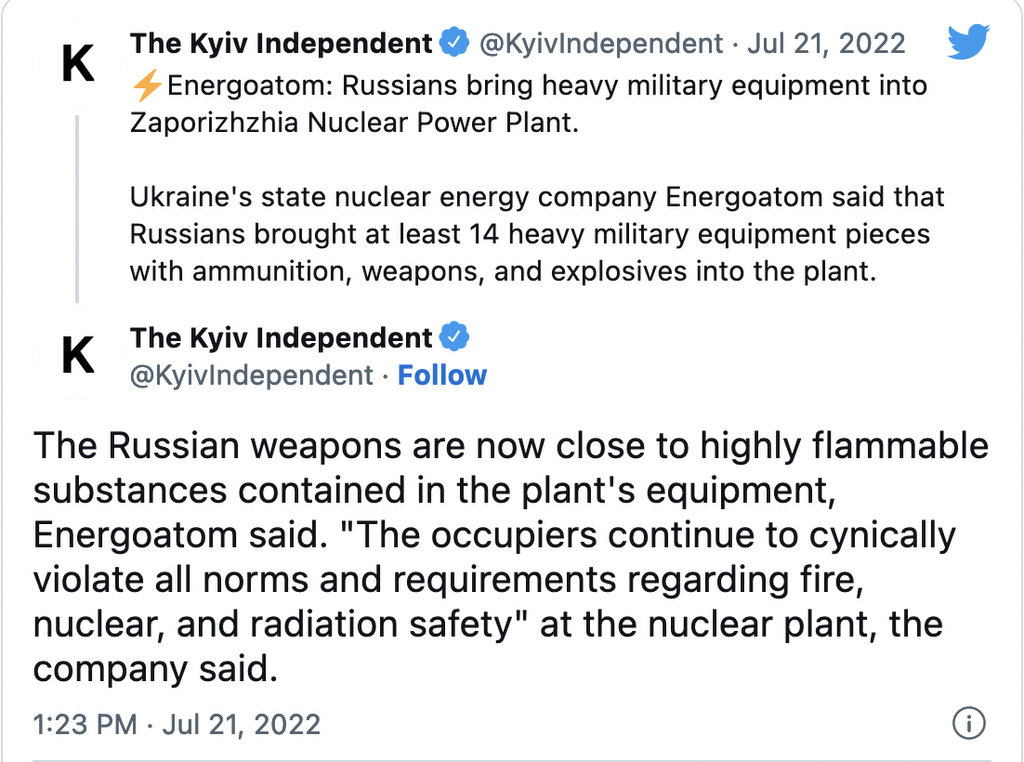 I’ll believe the Russians are moving military equipment into the Zaporizhzhia Nuclear Power Plant, but the only “highly flammable substances” there would be diesel fuel for the backup generators. An engineered safety feature of nuclear power plants is to avoid any danger of fire, so the presence of anything flammable is minimized. I suspect that someone is saying that to try to scare the Russians off or to make them sound irresponsible. The Ukrainians have done this kind of hazard inflation before.

Operational update regarding the #russian_invasion as of 06:00, on July 21, 2022
The one hundred and forty-eighth (148) day of the heroic resistance of the Ukrainian people to a russian military invasion continues.
There are no signs of the creation of offensive groups were found in the Volyn and Polissya directions.
In the Siversky direction, the enemy continues to carry out aerial reconnaissance by UAVs in the border areas of Chernihiv and Sumy oblasts.
In the Kharkiv direction, the enemy carried out fire damage from barrel and jet artillery in the areas of Mospanove, Petrivka, Ruski Tyshky, Bazaliivka, Pechenyhy, Tsyrkuny, Pytomnyk, Dementiivka, Korobochkine and Prudyanka settlements.
In the Slovyansk direction, shelling was recorded near Dibrovne, Krasnopillya, Chepil, Adamivka, Hrushuvaha and others.
In the Kramatorsk direction, the enemy shelled the Kramatorsk, Siversk, Hryhorivka, Zvanivka, and Spirne districts with artillery. The enemy is conducting assault operations near Ivano-Daryivka, the fighting continues.
In the direction of Bakhmut, the enemy is conducting combat operations with the aim of creating conditions for an offensive on Bakhmut and taking over the territory of the Vuhlehirska TPP. It carried out shelling of military and civilian infrastructure in the areas of the settlements of Rozdolivka, Bilogorivka, Pokrovske, Nova Kamianka, Bakhmut, Vershyna, Novoluhanske, Zaitseve, Toretsk and others. He carried out airstrikes on the villages of Vershyna and Bilohorivka.
The enemy carried out assaults with the aim of taking over the territory of the Vuhlehirska TPP. It was unsuccessfully. Ukrainian soldiers forced the occupiers to flee. Fighting continues in the Novoluhansky region. In order to expose the firing positions of the Defense Forces in certain directions, the enemy used subversive and reconnaissance groups.
In the Avdiivka, Novopavlivka, and Zaporizhzhia directions, the enemy carried out systematic shelling of civilian and military infrastructure in the areas of Vesele, Umanske, Kurakhove, Novomykhailivka, Mykilske, Vuhledar, Zolota Nyva, Novopil, Novomayorske, Poltavka, Chervone, Mala Tokmachka, Novoandriivka and others. Airstrikes near Krasnohorivka and Solodke. In some areas, the enemy is improving the engineering equipment of defensive positions.
In the South Buh direction, the enemy is concentrating its main efforts on maintaining the occupied positions. Conducts reconnaissance of the UAVs.
The enemy systematically shelled civilian infrastructure along the contact line in the areas of Apostolove, Mykolaivka, Lepetykha, Chervona Dolyna, Murakhivka, Blahodatne, Prybuzke and Lymany settlements with tanks, barrel and rocket artillery.
The threat of missile strikes on critical infrastructure facilities on the territory of Ukraine remains.
According to the available information, in the military units of the armed forces of the russian federation, there is a tendency to dismiss a significant part of personnel who served under short-term contracts. Also, most servicemen refuse to extend long-term contracts that have expired.

Russian Defence Ministry report on the progress of the special military operation in Ukraine
The Armed Forces of the Russian Federation continue the special military operation in Ukraine. The enemy suffers considerable losses.
According to precised data, high-precision attack launched by Russian Aerospace Forces on July 16 at a provisional base deployed by nationalists in Imperiya recreation centre located in Konstantinovka (Odessa region) has resulted in the elimination of over 600 militants, including up to 120 foreign mercenaries.
In addition, according to precised data, the attack launched on July 17 at a provisional base of a unit of the Armed Forces of Ukraine (AFU) deployed at a vegetable warehouse in Nikolayev has resulted in the elimination of over 320 nationalists.
In view of considerable losses in the eastern part of Ukraine, residents of the western regions mobilised to the AFU refuse to go to Donbass.
All the servicemen of 100th Territorial Defence Brigade located in Lutsk (Volyna region) have refused to be involved in operations. AFU command disarmed the brigade, the initiators were arrested, the formation would be reformed.
Operational-tactical and army aviation, missile troops and artillery continue launching attacks at the military facilities in Ukraine.
The list of neutralised targets includes 9 command posts, including 1 of 59th Marines Brigade in Nikolayev where foreign mercenaries were deployed, as well as one of 14th Mechanised Brigade near Artyomovsk and the headquarters of the Security Service of Ukraine in Kramatorsk.
6 missile, artillery armament and munitions depots have been destroyed near Konstantinovka, Fyodorovka (Donetsk People’s Republic), Maliyevka (Dnepropetrovsk region) and Nikolayev.
The list of targets neutralised within the counter-battery warfare includes 1 Uragan MRLS battery and 1 Akatsiya self-propelled howitzer battery with a counter-battery warfare radar near Zarozhnoye (Kharkov region), 8 Ukrainian Grad MRLS plattoons near Zvanovka, Kirovo, Soledar, Krasnoye, Platonovka, Kirovo (Donetsk People’s Republic), Dobropolye (Zaporozhye region) and Shirokoye (Nikolayev region), 9 D-20 howitzer plattoons and 7 D-30 cannon plattoons near Seversk, Kirovo, Novomikhailovka, Konstantinovka, Klescheyevka, Georgiyevka (Donetsk People’s Republic), Novopavlovka, Vesyoloye (Zaporozhye region), as well as Dobroye (Nikolayev region).
Fighter aviation of Russian Aerospace Forces has shot down 1 Su-25 airplane of Ukrainian Air Force near Kramatorsk (Donetsk People’s Republic).
Russian air defence means have shot down 1 Mi-8 helicopter of Ukrainian Air Force near Pervomaiskoye (Nikolayev region), as well as 5 Ukrainian unmanned aerial vehicles near Topolskoye, Dementiyevka, Peschanoye (Kharkov region), Yenakiyevo and Makeyevka (Donetsk People’s Republic).
8 projectiles launched by Uragan MRLS near Chernobayevka, Kazachyi Lagerya (Kherson region) and Kamenka (Kharkov region) have been intercepted.
In total, 260 airplanes and 144 helicopters, 1,577 unmanned aerial vehicles, 356 air defence missile systems, 4,135 tanks and other armoured combat vehicles, 762 combat vehicles equipped with MRLS, 3,174 field artillery cannons and mortars, as well as 4,413 units of special military equipment have been destroyed during the special military operation.

Operational update regarding the #russian_invasion as of 18:00, on July 21, 2022
The one hundred and forty-eighth (148) day of the heroic resistance of the Ukrainian people to a russian military invasion continues.
There are no major changes on the Volyn and Polissya directions. During July of this year, on the territory of the republic of belarus, a campaign of agitation of citizens of this country to sign contracts with russian private military companies is ongoing. The military commissariats of the armed forces of the republic of belarus take an active part in these events.
In the Siversky direction, the enemy continues shelling the positions of our troops in the Sumy oblast and conducting aerial reconnaissance by UAVs.
In the Kharkiv direction, the enemy launched airstrikes near Verkhniy Saltiv and Rtyshivka. It carried out artillery shelling in the districts of Kharkiv, Pytomnik, Ruska Lozova, Rubizhne, Cherkaski Tyshky, Prudyanka, Chuhuyev, Udy, Korobochkyne, Zalyman and Malynivka.
It unsuccessfully tried to advance in the direction of Velyki Prohody – Pytomnyk with assault actions. The enemy also carried out aerial reconnaissance with an unmanned aerial vehicle near Slatyne, Rubizhne, Zamulivka and Dementiyvka.
In the Slovyansk direction, the enemy launched artillery fire in the areas of Dolyna, Bohorodychne, Husarivka, Velyka Komyshuvaha, Nortsivka, and Virnopillya settlements. Conducted aerial reconnaissance near Dmytrivka and Virnopilla.
In the Kramatorsk direction, the enemy carried out airstrikes in the areas of Serebryanka and Spirne. Artillery shelling was recorded near Siversk, Hryhorivka and Ivano-Daryivka. Enemy UAVs operational-tactical level operated near Rozdolivka and Hryhorivka.
Ukrainian soldiers repulsed the offensive of the occupiers in the direction of the Lysichansk refinery – Ivano-Daryivka. The enemy suffered losses and retreated.
In the direction of Bakhmut, the enemy carried out airstrikes in the areas of Vershina, Bilohorivka, Kostyantynivka and Berestove settlements. Artillery shelling was recorded in the vicinity of Berestove, Vesele, Vyimka, Vershyna, Novoluhanske, Bakhmut, Zaytseve, Soledar, Rozdolivka, and Kurdyumivka.
The weak assaults of the occupiers on the directions Klynove – Vershyna, Myronivka – Vuhlehirska TPP failed again.
In the Avdiyivka, Novopavlivka, and Zaporizhzhya directions, in order to restrain the actions of our troops, the enemy carried out airstrikes near Krasnohorivka, Kamianka, Solodke, and Novoandriivka. It carried out artillery shelling in the areas of the settlements of Avdiivka, Krasnohorivka, Pisky, Zolota Nyva, Mykilske, Zaliznychne, Stepnohirsk, Novoselivka Druga, Vugledar, Hulyaipilske, Novopil, Bilohirya. To adjust the artillery fire, operational-tactical level unmanned aerial vehicles were used near Shcherbaky, Malaya Tokmachka and Bilohirya.
In the Southern Buh direction, artillery shelling was recorded in the areas of the settlements of Olgyne, Potemkine, Knyazivka, Shyroke, Ternivka, Luch, Kotlyareve, Pervomaiske, Nova Zorya, Dobre and Bila Krynytsya. The occupiers unsuccessfully tried to launch a counterattack in the direction of Sukhy Stavok – Andriivka.
In the Black Sea and Azov sea zones, the enemy’s naval group focuses its main efforts on blocking civilian shipping in the northwestern part of the Black Sea. There are two cruise missile carriers outside the bases.
Personal documents are confiscated from the forcibly mobilized, who are taken to replenish their losses from the temporarily occupied territories of Donetsk and Luhansk oblasts. This shows the complete lawlessness of this contingent and, allegedly, should stop desertion. Also, it will not allow identification of the mentioned persons in case of death, which opens the way for various financial frauds in favor of the command staff of the armed forces of the russian federation.