Russia’s only operational company of BMP-T Terminator tank support vehicles has likely been deployed to the Severodonetsk axis of the Donbas offensive.
Their presence suggests that the Central Grouping of Forces (CGF) is involved in this attack, which is the only formation fielding this vehicle. CGF previously suffered heavy losses while failing to break through to eastern Kyiv in the first phase of the invasion.
Russia developed Terminator after identifying the need to provide dedicated protection to main battle tanks it used during the Afghan and Chechen wars.
The Severodonetsk area remains one of Russia’s immediate tactical priorities. However, with a maximum of ten Terminators deployed they are unlikely to have a significant impact on the campaign. 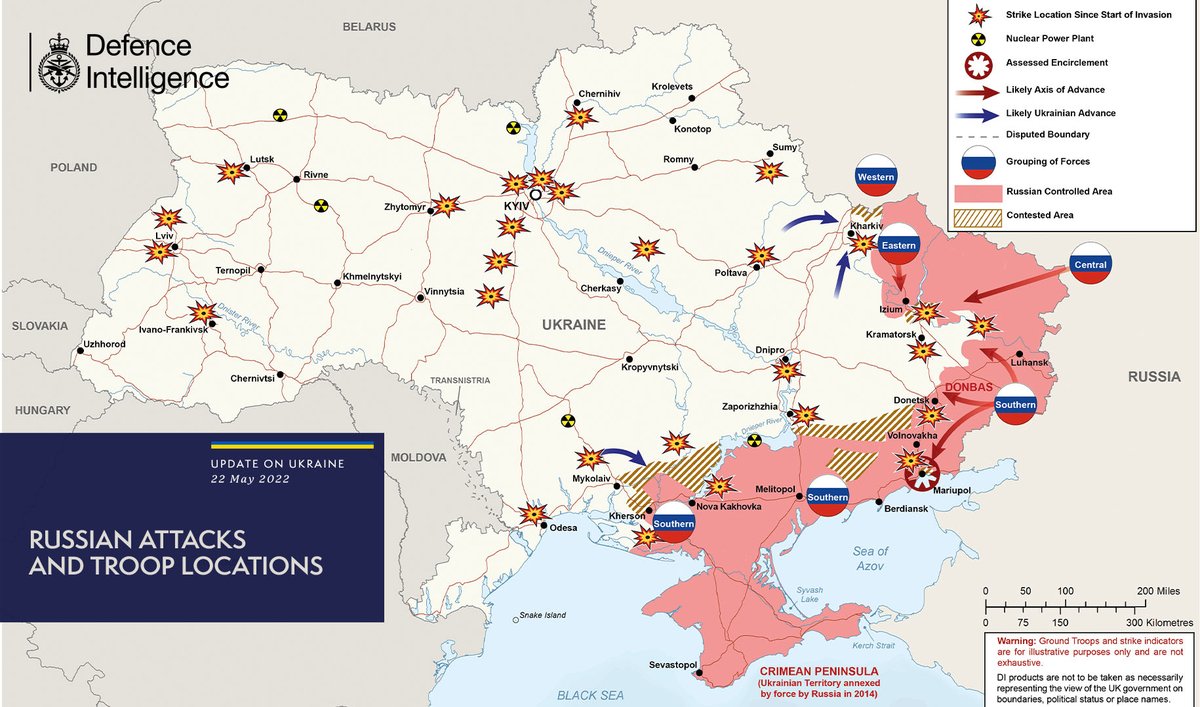 The operational update regarding the #russian_invasion on 06.00 on May 22, 2022.
The eighty-eighth day of the heroic resistance of the Ukrainian people to a russian military invasion continues.
russian enemy does not stop conducting offensive operations in the Eastern Operational Zone.
russian enemy continues to launch missile and air strikes on the territory of Ukraine. Increased the intensity of the use of aircraft to destroy the critical infrastructure of settlements in the area of ​​active hostilities.
In the Volyn and Polissya directions, units of the Armed Forces of the republic of belarus have intensified reconnaissance, and the deployment of additional means of electronic reconnaissance in the border areas of the Gomel region has been noted. There is still a threat of missile and air strikes from the territory of the republic of belarus on objects on the territory of Ukraine.
In the Siversky direction, russian enemy continues to shell settlements and infrastructure in Sumy and Chernihiv oblasts. It carried out shelling in the areas of Boyaro-Lezhachi, Ulytsia, Bunyakine, Hirky, Gremyach and Muravyi.
In the Slobozhansky direction, russian enemy, by forces of separate units of the 6th Comnibed Arms Army of the Western Military District and the Baltic Fleet, is fighting to maintain the occupied borders in the Kharkiv direction and prevent our troops from entering the state border.
russian enemy forces are preparing to resume the offensive in the Slovyansk direction. The occupiers carried out artillery shelling in the areas of the settlements of Vernopil, Dibrivne and Dovhenke.
In the Belgorod region, russian enemy deployed launchers of the Iskander-M operational-tactical missile system. In addition, russian enemy is increasing the system of logistics and repair bases.
In the Donetsk direction, the occupiers are trying to break through the defence of our troops and reach the administrative borders of Luhansk region.
russian enemy carried out air strikes on civilian infrastructure in the areas of Vrubivka and Bakhmut.
russian enemy did not conduct active hostilities in the Lyman direction. It fired on infrastructure facilities in the area of ​​the settlements of Lyman, Ozerne, Zakitne, Dibrova and Serebryanka.
In the Siverodonetsk direction, russianenemy fired on the positions of the Defense Forces along the entire line of contact with mortars and artillery, concentrating efforts in the direction of the settlements of Siverodonetsk and Lysychansk. russian enemy conducted offensive and assault operations in the areas of Oskolonivka, Purdivka, Shchedryshcheve and Smolyaninove. The offensive was repulsed, russian enemy suffered losses and was forced to retreat to the old positions.
In the Bakhmut direction, with the support of artillery, russian enemy tried to improve the tactical situation in the areas of the settlements of Trypillya, Lypove and Vasylivka, fighting continues.
In the Avdiivka direction, russian occupiers suffered losses in the area of ​​the settlement of Krasnohorivka.
In the Kurakhiv direction, russian enemy stormed the Marinka area and was unsuccessful. It fired on Novomykhailivka and Volodymyrivka. It struck air strikes on the settlements of Mykilske and Katerynivka.
In the Novopavlivsk and Zaporizhzhya directions, russian enemy tried to gain a foothold on the occupied frontiers, shelling the positions of the Defense Forces and civilian infrastructure.
russian enemy did not conduct active hostilities in the South Buh area. Focuses its main efforts on maintaining occupied frontiers, conducting reconnaissance and engineering activities of positions. It shelled the positions of the Defense Forces with mortars and artillery. Increases the air defense system.
The situation in the Bessarabian direction has not changed.
In the past 24hrs, nine enemy attacks have been repulsed in the Donetsk and Luhansk directions, five tanks, four artillery systems, ten units of armoured combat vehicles and two enemy vehicles have been destroyed. Air defense units hit one Orlan-10 UAV.
Anti-aircraft missile units of the Air Force shot down two cruise missiles, and strike aircraft destroyed twelve units of enemy military equipment.

During the day, high-precision air-based missiles have hit 3 command posts, 13 areas of Ukrainian manpower and military equipment concentration, as well as 4 ammunition depots near Soledar, Sol‘ in Donetsk People’s Republic and Nyrkovo in Lugansk People’s Republic.
Operational-tactical and army aviation have hit 3 command posts, 26 areas of AFU manpower and military equipment concentration, as well as 1 ammunition depot near Krasnyi Liman.
The attacks have resulted in the elimination of more than 210 nationalists and up to 38 armoured and motor vehicles.
Russian air defence means have shot down 11 Ukrainian unmanned aerial vehicles near Kurakhovo, Guselskoe of Donetsk People’s Republic, Popasnaya of Lugansk People’s Republic, Chernobaevka in Kherson region, Russkaya Lozovaya, Kozachya Lopan, Nizshee, Malaya Kamyshevaha and Petrovskoe in Kharkov region during the day.
In addition, 2 Ukrainian Smerch multiple-launch rockets have been intercepted near Kamenka and Bukino, Kharkov Region.
Missile troops and artillery have hit 583 areas of enemy’s manpower and military equipment concentration, 41 command posts, 76 artillery and mortar units at firing positions, including 3 batteries of Grad MLRS, as well as the Ukrainian Bukovel electronic warfare station near Annovka, Nikolaev Region.
In total, 174 Ukrainian aircraft and 125 helicopters, 977 unmanned aerial vehicles, 317 anti-aircraft missile systems, 3,198 tanks and other armored combat vehicles, 408 multiple launch rocket systems, 1,622 field artillery and mortars, as well as 3,077 units of special military vehicles were destroyed during the operation.

WASHINGTON, June 26 (Reuters) - The United States is likely to announce this week the purchase of an advanced medium to long range surface-to-air missile defense system for Ukraine, a source familiar with the matter told Reuters on Sunday.