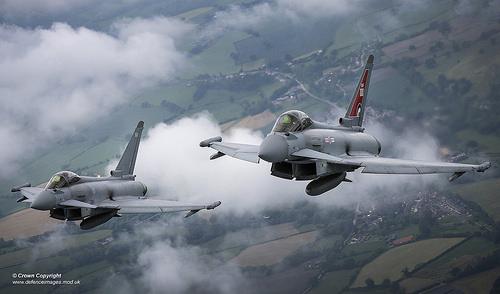 It is my belief that Britain has its greatest opportunity in 50 years to redefine our role. As we leave the European Union. And, the world changing so rapidly it is up to us to seize the opportunities that Brexit brings. We will build new alliances, rekindle old ones and most importantly make it clear that we are the country that will act when required. We should be the nation that people turn to when the world needs leadership.

And Defence will be pivotal in reinforcing Britain’s role as an outward looking nation. We are making sure it does so in a number of key ways:

First, by increasing our global presence and building on our alliances.

NATO. 70 years on from its founding, remains the bedrock of our nation’s Defence. In the past five years, the Alliance has come a long way. It is far more focused and ready to deter and defend against Russian hostile acts. But, more European nations need to be ready and capable of responding too. Stepping up to the 2% NATO target and not being distracted by the notion of an EU Army.

Britain must be willing and able to lead the Alliance, to bring stability in a changing-world. We are a leader in NATO, this year hosting the Leaders Meeting here in London. Alongside this we have sent a Battle Group to Estonia to support NATO’s Enhanced Forward Presence. We lead multi-national maritime task groups in the Mediterranean and defend the skies over the Black Sea and the Baltics. And, we strongly support NATO’s Readiness Initiative to make sure forces are available and ready to do their job.

And in NATO, we must stand firm against Russia’s non-compliance with the INF Treaty. If necessary being ready to deal with the threat that new Russian missile systems may pose. The Alliance must develop its ability to handle the kind of provocations that Russia is throwing at us. Such action from Russia must come at a cost. Nor, can we forget those countries outside NATO who face a day-to-day struggle with Russian attempts to undermine their very sovereignty. We stand ready to support our friends in Ukraine and the Balkans. These countries have the right to choose their own destiny and be free from Russian interference. At the same time, in such an uncertain age, like-minded nations must come together to increase their own security. That is why the United Kingdom is leading the nine-nation Joint Expeditionary Force which in a few months’ time will take part in its first deployment to the Baltics.

But we must not see this as our limit. We must be willing to go further. History has taught us that crisis comes when we least expect it. As uncertainty grows we must be ready to act, bringing others with us. Readiness has to be our new watchword.

In an era of ‘Great Power’ competition we cannot be satisfied simply protecting our own backyard. The UK is a global power with truly global interests. A nation with the fifth biggest economy on the planet. A nation with the world’s fifth biggest Defence budget and the second largest Defence exporter. And since the new Global Great Game will be played on a global playing field, we must be prepared to compete for our interests and our values far, far from home.

That is why Global Britain needs to be much more than a pithy phrase. It has to be about action. And our armed forces represent the best of Global Britain in action. Taking action alongside our friends and allies. Action to strengthen the hand of fragile nations and to support those who face natural disasters. Action to oppose those who flout international law. Action to shore up the global system of rules and standards on which our security and our prosperity depends.
And action, on occasion, that may lead us to have to intervene alone. (…)

So, as well as our relationships with Europe, we need to build on our established relationship with the United States, Australia, New Zealand and Canada as part of the Five Eyes. With Singapore and Malaysia in the Five Powers Defence Arrangement. With other ASEAN nations, with Japan, the Republic of Korea and India. With our partners in the Middle East, and with our many friends in Africa – from Nigeria in the West to Kenya in the East.

And we are seeking to use our global capabilities to strengthen our global presence.

From this spring, HMS Montrose, along with five other naval vessels, will be permanently based in the Gulf using innovative crewing and support methods to keep the ship available for more of the time. Today, we also go further. And I can announce the first operational mission of the HMS Queen Elizabeth will include the Mediterranean, the Middle East and the Pacific region. Making Global Britain a reality. Significantly, British and American F35s will be embedded in the carrier’s air wing. Enhancing the reach and lethality of our forces and reinforcing the fact that the United States remains our very closest of partners. We share the same vision of the world. A world shaped by individual liberty, the rule of law and, of course, the tolerance of others. We have the unique ability to integrate with US forces across a broad spectrum of areas. And, we are more determined than ever to keep working together.

We will also be using our string of global support facilities and military bases more strategically…to consistently project power both hard and soft. The Duqm port facilities in Oman are large enough to be able to support our aircraft carriers. The Al Minhad and Al Udeid Air Bases, in the Emirates and Qatar respectively, provide strategically important capabilities. In Bahrain, our Naval Base and our long-standing Maritime Command make a major contribution to our activities in the region but also beyond. Further afield we already benefit from facilities in Belize, in Brunei, in Singapore as well as our bases in Cyprus, Gibraltar and Ascension Island.

And, I believe that we need to go further. Considering what permanent presence we might need in areas including the Caribbean and Asia-Pacific to extend our global influence. Our proactive approach shows we are not getting by on half measures. For us global engagement is not a reflex reaction to leaving the European Union. It is about a permanent presence. (…)

Finally, if we are to live up to our global role then our armed forces must continue to be a lethal fighting force fully adapted to the demands of 21st century warfare.

When I came into the Department the talk was about cutting capability. But instead, this Government has delivered an extra £1.8 billion of Defence funding, keeping us on track and prioritising the right UK Defence for the decade to come. That includes £600 million to protect the future of our nuclear deterrence. This ensures we will deliver the new submarines on time and means that we are spending £4 billion every year to ensure the ultimate guarantee of our safety for another 50 years.

That means £60 million to invest in Typhoon’s next generation radar. And, as the cyber threat grows, we are making a very significant additional investment on the £1.9 billion we spend on cyber capabilities. That’s funding to improve offensive cyber, putting the command and control structures in place across-Government. And, it will give us extra money to protect our network resilience from online attacks.

With the threat from the Kremlin increasing in the North Atlantic, we’re spending an additional £33 million to improve our anti-submarine warfare capabilities.

And, we will also spend £100 million on a variety of initiatives to modernise how we do business in defence. If this isn’t enough there will also be a further £24 million available through innovative Spearhead projects.

Meanwhile, we are using our Transformation Fund to further increase our armed forces’ lethality. For example, we’re going to make sure that our ground troops – whether in the Army, the Royal Marines or the RAF Regiment – are going to get the same night vision equipment that their colleagues in Special Forces have. We’re also going to buy pioneering robotic fighting and logistic vehicles. Reducing the risk to our personnel and increasing the firepower and agility of our infantry.

In addition, as a result of the Transformation Fund the Royal Air Force will double our armed ISR capability so we can identify and neutralise targets far faster. The Venom kinetic strike capability will mean those who wish to do us harm have more to fear.

And to our armed forces quite simply the sky is not the limit. In space, they look forward to the investment we are making to enhance our space operations centre bringing together the best civilian and military minds.

And our ambitions are greater still.

I want to see our armed forces embracing transformation at an ever-faster rate, keeping pace with technological change, enhancing our mass and increasing our lethality. We shouldn’t be shy about the ambition that we have for our forces. The future of conflict will require us to be adaptable, agile and capable of using new technologies quickly and cost-effectively. I am determined to focus the Transformation Fund on investments that will create the armed forces of the future. (…)

And Brexit. Brexit has brought us to a moment. A great moment in our history. A moment when we must strengthen our global presence, enhance our lethality, and increase our mass.

So today I set out my vision for UK Defence in a more global age. But as we look to life beyond Brexit, I believe it is incumbent on us all to consider the role of Defence in our national life. Defence has always been the most vital and first duty of Government. But now we have an unparalleled opportunity to consider how we can project and maximise our influence around the world in the months and years ahead. It is up to all of us…from here on in…to make sure that our great nation seizes and grasps the opportunity that present themselves with both hands.

This story is pretty scary. It reveals a profound sympathy with Putin's policy objectives at the heart of the German establishment. I wonder how many Schönbachs there are out there? https://www.ft.com/content/9b117e20-315e-4337-b8ba-8d64c29f0107

#BREAKING: Britain Says Moscow Is Plotting to Install a Pro-Russian Leader in Ukraine: In a highly unusual public statement, backed by U.S. officials, London named the putative head of a potential puppet government but few other details #ukrainecrisis https://www.nytimes.com/2022/01/22/world/europe/ukraine-russia-coup-britain.html