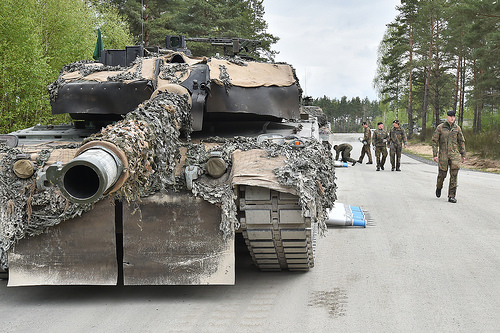 The Austrian platoon took top honors in the second annual Strong Europe Tank Challenge with Germany and the U.S. placing second and third, May 12, 2017.
„We tried as hard as we could to prepare ourselves and our crews for competition, and it was just the right way,“ said Staff Sgt. Thomas Krims, a loader on the platoon commander’s tank.
The challenge was a five-day competition that tested offensive and defensive operations as well as vehicle identification, battle damage assessment and precision maneuvers.

Participating nations included Austria, France, Germany, Poland, Ukraine and the United States, who each brought a platoon with four tanks to compete. Four-person crews manned Austria’s Leopard 2A4 tanks, Germany’s Leopard 2A6 tanks and Poland’s Leopard 2A5 tanks. Three-person teams operated France’s Leclerc tanks and Ukraine’s T-64BM tanks. And the U.S. used the M1A2 SEP tanks with four Soldiers per tank.
Platoons rotated throughout 12 events with 1,500 possible points in total. Teams tested their live-fire maneuvers in defensive and offensive operations, with the possibility of scoring up to 500 points in each event. The other events were worth 50 possible points each.
The teams ran through lanes that challenged their abilities to react to indirect fires, chemical attacks and improvised explosive devices while treating and evacuating casualties, and providing vehicle recovery.
Platoons identified 30 friendly and enemy vehicles, determined the range of targets without using the tank’s main sight or laser ranger finders, and called for fire to engage targets.
Each crew was also tested on their abilities to report accurate information during an urban area patrol and navigate tanks through an obstacle course without vehicle optics.
The remaining events required the Soldiers to dismount from their tanks to compete in a team run, a relay race with tank-related objects, and a combat pistol shoot. The final day of the challenge ended with a friendship shoot.
Along with building an environment for a friendly competition, the event also built camaraderie.
„We learned that every nation has their pride in being a tanker,“ said Krims. „Every team has their own way, but we learned that our way of performing as a team in every task we got is what brought us success.“
„This is a competition, but it’s not really about the competition,“ said Sgt. Maj. David Glenn, 7th Army Training Command’s operations senior noncommissioned officer. „It’s really about training, partnership, esprit de corps and interoperability.“
The challenge fosters military partnership and promoted interoperability, while providing an environment to share tactics, techniques and procedures.
„We truly appreciate the opportunity to come here and see what other nations do as tankers,“ said Krims.

The Russian military will soon exhaust its combat capabilities and be forced to bring its offensive in Ukraine’s eastern Donbas region to a grinding halt, according to Western intelligence predictions and military experts. By @LizSly: https://www.washingtonpost.com/world/2022/06/25/ukraine-russia-balance-of-forces/