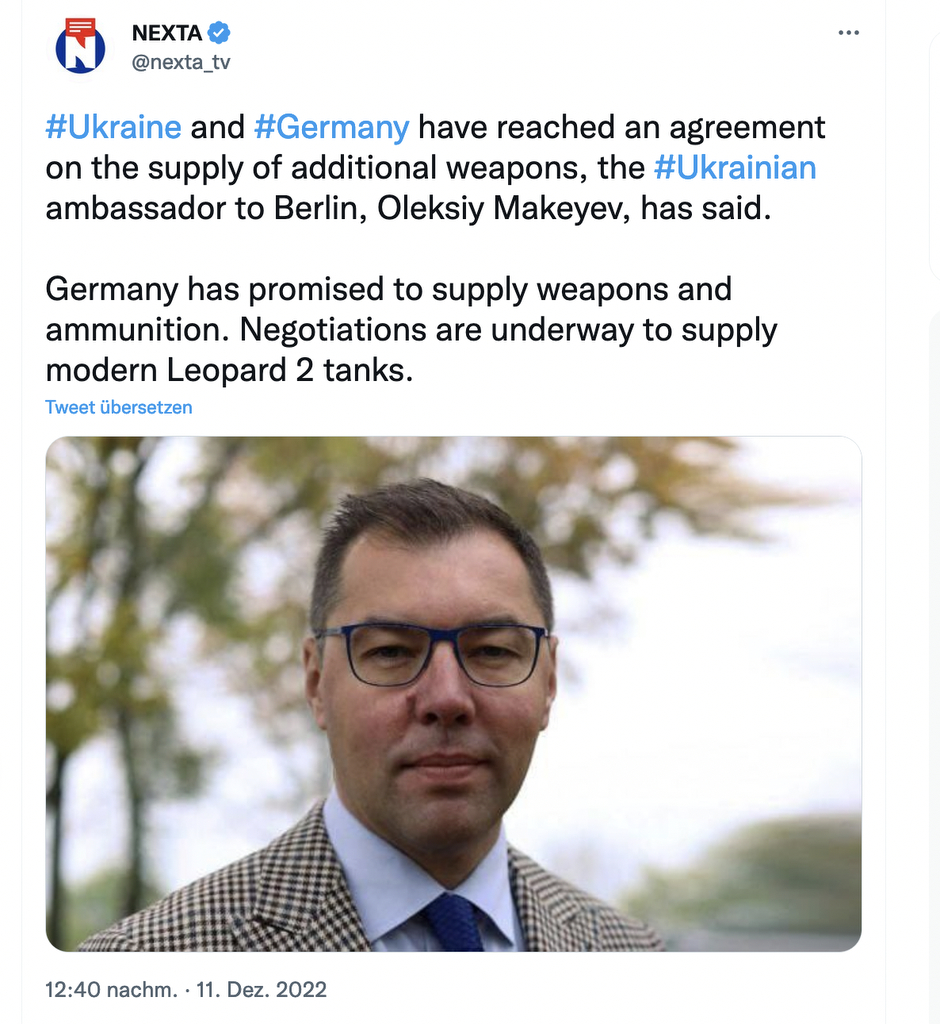 On 5 December 2022, President Putin signed the law on Russia’s Federal Budget. Draft budgets have stated over 9 trillion rubles (US $143bn) will be allocated across defence, security and law enforcement in 2023.
This is a significant increase compared to prior years and will represent over 30 per cent of Russia’s entire budget.
The budget approved by Putin is likely over-optimistic in its expectation of revenue and spending in 2023. Therefore, other parts of Russia’s budget are likely to come under increasing pressure to support the costs of the war.

Operational update regarding the russian invasion on 06.00, on December 11, 2022
The two hundred ninety-first (291) day of the heroic resistance of the Ukrainian people to a russian military large-scale invasion continues.
Over the past day, units of the Defense Forces of Ukraine repelled attacks by russian invaders in the areas of the settlements of Novoselivske, Andriivka, Chervonpopivka, Zhytlivka, Serebryanske, and Bilohorivka in the Luhansk oblast and Verkhnyokamianske, Soledar, Bakhmutske, Pidhorodne, and Bakhmut in the Donetsk oblast.
In addition, the enemy launched 3 missile and 17 air strikes, as well as carried out more than 60 MLRS attacks.
In the future, the threat of missile attacks on the objects of the energy system and critical infrastructure throughout the territory of Ukraine remains.
In the Volyn and Polissya directions, the situation remains without significant changes, no signs of the formation of enemy offensive groups have been detected.
On the Siverskyi and Slobozhanskyi directions, the enemy continues to hold his troops in the border areas of the Bryansk, Kursk and Belgorod regions. The settlements of Vyntorivka and Mohrytsia in the Sumy oblast and Strilecha, Zelene, Starytsa, Ohirtseve, Varvarivka, Chernyakiv, Chuhunivka, Dvorichna and Ridkodub in the Kharkiv oblast were hit by mortar and artillery fire.
In the Kupyansk and Lyman directions, the occupiers shelled the districts of Zapadne, Kislivka, Tabaivka, Pishchane, Krokhmalne, Berestove, Kharkiv oblast; Terny in Donetsk oblast and Stelmakhivka, Novoyehorivka, Makiivka, Ploshchanka, Nevske and Dibrova in Luhansk oblast.
In the Bakhmut and Avdiivka directions, the enemy fired at the positions of the Defense Forces in the areas of more than twenty settlements. In particular, Verkhnyokamianske, Spirne, Vesele, Berestove, Bilohorivka, Yakovlivka, Soledar, Bakhmutske, Bakhmut, Heorhiivka, Maryinka, Bila Hora, Kurdyumivka, Zalizne and Avdiivka of the Donetsk oblast.
In the direction of Novopavlivsk, the enemy tried to attack our positions with tanks and artillery near Velyka Novosilka, Neskuchne, Prechystivka, and Vuhledar of the Donetsk oblast.
In the Zaporizhzhia oblast, the russian invaders shelled more than twenty settlements. Among them are Zelene Pole, Novosilka, Novopil, Vremivka in the Donetsk oblast and Novoandriivka, Orihiv, Hulyaipole, Dorozhnyanka, Zaliznychne and Mala Tokmachka in Zaporizhzhia oblast.
In the Kherson direction, the suburbs and the city of Kherson and other settlements on the banks of the Dnipro suffered fire damage.
In the temporarily occupied territory of the Luhansk oblast, the russian occupiers have been conducting searches in educational institutions for the past 2 weeks. The goal is to identify and destroy books in the Ukrainian language and materials containing symbols of Ukraine.
In order to replenish the insufficient personnel of enemy units operating in the Severodonetsk direction, measures of forced mobilization were intensified in the temporarily occupied territory of Luhansk oblast. In the city of Krasniy Luch, the number of patrols that check men’s documents, hand out summonses, and take them to the collection point for those mobilized has increased.
Over the past 24 hours, missile and artillery units of the Defense Forces of Ukraine have hit 3 control points and 3 areas of concentration of personnel, weapons and military equipment of the occupiers.

Russian Defence Ministry report on the progress of the special military operation in Ukraine (11 December 2022)
Russian Federation Armed Forces continue the special military operation.
In Kupyansk direction, artillery fire have destroyed concentration of the AFU’s manpower and military equipment near Sinkovka, Tabayevka and Krakhmalnoye (Kharkov region). Up to 30 Ukrainian servicemen, 1 armoured personnel carrier, 3 artillery pieces and 6 motor vehicles have been eliminated.
In Krasniy-Liman direction, Russian troops continued their offensive in selected areas, which resulted in the occupation of more favourable lines and positions. The enemy with the help of three assault groups reinforced with armoured vehicles made unsuccessful attempts to counterattack the positions of the Russian troops towards Zhytlovka, Ploshchanka and Kolomyichikha (Lugansk People’s Republic). All the attacks have been repulsed, and the AFU units have been pushed back to their initial positions. Up to 65 Ukrainian servicemen, 1 armoured combat vehicle and 2 pick-up trucks have been eliminated.
In addition, 3 Ukrainian sabotage and reconnaissance groups and 3 mortar crews have been eliminated near Chervonaya DIibrova and Serebryanskoye forestry (Lugansk People’s Republic).
In Donetsk direction, Russian troops have carried out offensive, repelling the AFU counterattacks in some directions. Up to 40 Ukrainian servicemen, 2 armoured fighting vehicles and 3 pick-up trucks have been eliminated.
In South Donetsk direction, the enemy with a reinforced platoon attempted to attack Russian positions near Neskuchnoye (Donetsk People’s Republic). Artillery fire have defeated the enemy. Up to 40 Ukrainian servicemen, 1 infantry fighting vehicle, 2 armoured fighting vehicles and 2 pick-up trucks have been eliminated.
Operational-Tactical Aviation, Missile Troops and Artillery have neutralised 86 AFU artillery units in firing positions, manpower and military equipment in 177 areas.
Within the counter-battery battle two artillery batteries of the 101st Territorial Defence Brigade and the 95th Airborne Assault Brigade of the AFU have been hit near Seversk and Krasniy Liman. In addition, a platoon of Grad multiple-launch rocket systems have been hit near Krasniy Liman (Donetsk People’s Republic).
One Ukrainian Buk-M1 surface-to-air missile launcher has been destroyed near Kramatorsk (Donetsk People’s Republic).
The anti-aircraft defence forces shot down five HIMARS multiple-launch rockets Almaznoye (Donetsk People’s Republic) and Melitopol, and two Uragan multiple-launch rockets near Novoye (Zaporozhye region).
In total, 341 airplanes and 181 helicopters, 2,647 unmanned aerial vehicles, 393 air defence missile systems, 7,057 tanks and other armoured combat vehicles, 926 combat vehicles equipped with MLRS, 3,676 field artillery cannons and mortars, as well as 7,547 units of special military equipment have been destroyed during the special military operation.

Operational update regarding the russian invasion as of 18.00, on December 11, 2022
The two hundred ninety-first (291) day of the heroic resistance of the Ukrainian people to a russian military large-scale invasion continues.
russian occupiers do not stop striking civilian infrastructure objects and civilian homes on the territory of Ukraine, violating the norms of International Humanitarian Law, laws and customs of war.
During the day, the enemy carried out 5 airstrikes and launched more than 40 MLRS attacks.
There is still a threat of the enemy launching strikes with the use of missiles and attack UAVs against the objects of the energy system and critical infrastructure throughout the territory of Ukraine.
In the Volyn and Polissya directions, the situation has not changed significantly, and no signs of the formation of enemy offensive groups have been detected.
In the Slobozhansk direction, the enemy shelled the areas of the settlements of Strilecha, Krasne, Starytsa, Vovchanski Khutory, Okhrimivka, Ambarne, Dvorichanske, Fiholivka, Dvorichna, and Kupyansk of the Kharkiv oblast.
On the Kupyansk and Lyman directions, the enemy inflicted fire damage near the settlements of Makiivka, Ploshchanka, Nevske, and Chervonpopivka in the Luhansk oblast and Terny, Kolodyazi, Zarichne, Dibrova, and Yakovlivka in the Kharkiv oblast.
In the Bakhmut and Avdiivka directions, the enemy continues to make attempts to break through the defense of our troops. Areas of twenty-six settlements were hit by fire from tanks and artillery. Among them are Verkhnokamianske, Vasyukivka, Soledar, Bakhmut, Klishchiivka, Bila Hora, Avdiivka, Opytne, Krasnohorivka and Maryinka of the Donetsk oblast. The occupiers also carried out an airstrike near Klishchiivka.
In the direction of Novopavlivka, the enemy is defending and shelling our positions with mortars, barrel and rocket artillery near the settlements of Velyka Novosilka, Zolota Nyva, Pavlivka and Vuhledar of the Donetsk oblast.
On the Zaporizhzhia direction, Vremivka in the Donetsk oblast and Temyrivka, Olhivske, Gulyaipole, Dorozhnyanka, Orihiv, Novoandriivka, Shcherbaky, Lobkovo and Plavna in Zaporizhzhia oblast were affected by enemy fire.
In the Kherson direction, the occupiers shelled, in particular, Havrylivka, Dudchany, Kachkarivka, Zmiivka, Beryslav, Ivanivka, Zelenivka, Inzhenerne, Antonivka and Dniprovske, and the city of Kherson.
russian occupation leadership continues the forced passporting of the population of the temporarily occupied territory of Ukraine. These measures are ongoing in the Melitopol district of the Zaporizhzhia region. Ukrainian hryvnias are gradually withdrawn from the circulation of trade networks, the population is forced to switch to russian rubles.
The occupiers are also trying to financially encourage the local population to collaborate, providing cash assistance to pensioners in the amount of 10,000 rubles and charging a higher salary to loyal local residents who agreed to work in the institutions of the so-called occupying power.
During the current 24 hours, the Ukrainian aviation has carried out 5 strikes on areas where personnel, weapons and military equipment are concentrated. Units of rocket troops and artillery at the same time hit 7 control points, 10 personnel concentration areas, an artillery concentration area and an enemy ammunition depot.

How tanks from Germany, US and UK could change the Ukraine war - BBC News https://www.bbc.com/news/world-europe-64422568