The heavy attrition of Russian Main Battle Tanks in Ukraine is highly likely partially due to Russia’s failure to fit and properly employ adequate Explosive Reactive Armour (ERA).
Used correctly, ERA degrades the effectiveness of incoming projectiles before they hit the tank. This suggests that Russian forces have not rectified a culture of poor ERA use, which dates back to the First Chechen War in 1994.
It is highly likely that many Russian tank crews lack the training to maintain ERA, leading to either poor fitting of the explosive elements, or it being left off entirely.
These deficiencies probably contribute to the widespread incidents of turret ejection, which are well documented in eye-witness videos from Ukraine.
The war has seen numerous failures by Russian commanders to enforce low-level battle discipline – such as the use of ERA. The cumulative effect of these failures is likely a significant factor behind the poor performance of Russia’s forces. 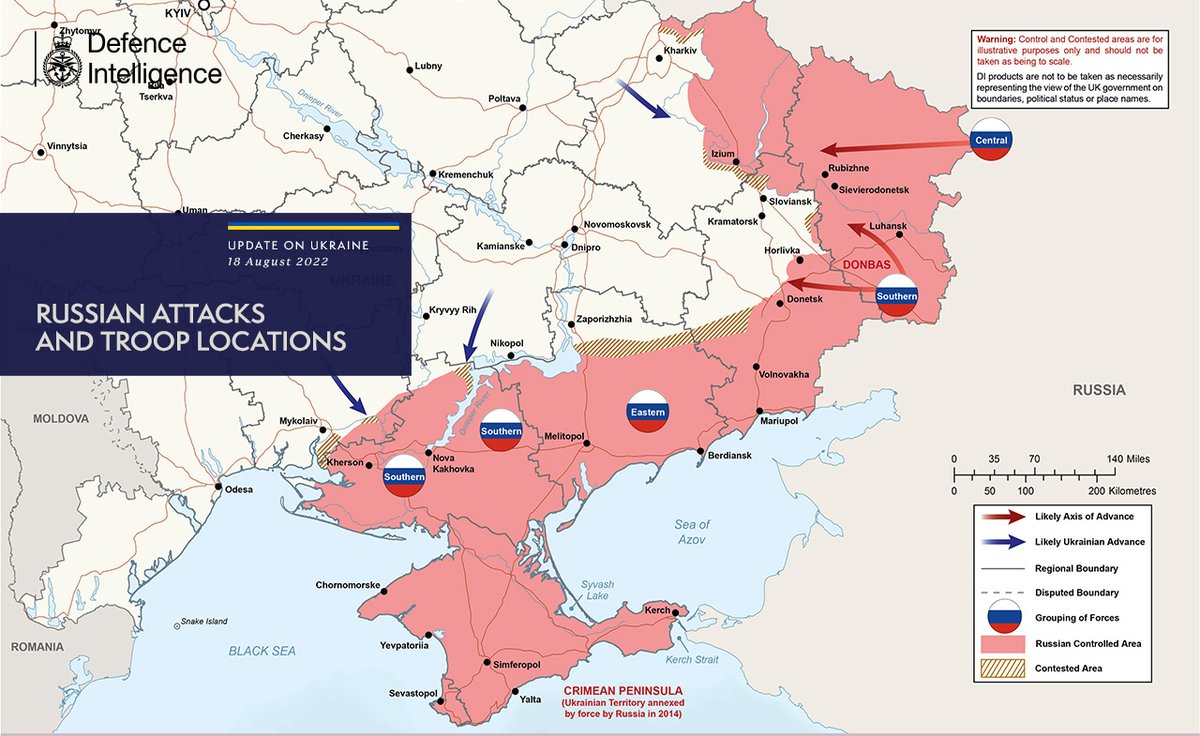 The operational update regarding the #russian_invasion on 06.00, on August 18, 2022
The one hundred seventy sixth (176) day of the heroic resistance of the Ukrainian people to a russian military invasion continues.
The enemy continues to focus its efforts on establishing full control over the territories of the Luhansk and Donetsk oblasts, maintaining the temporarily captured areas of the Kherson oblast and parts of the Kharkiv, Zaporizhzhia, and Mykolaiv oblast, creating favourable conditions for resuming the offensive in certain directions, as well as blocking Ukraine’s maritime communications in the Black Sea.
Air and missile strikes on military and civilian targets on the territory of Ukraine continue.
The situation in the Volyn and Polissya directions has not changed significantly. The units of the Armed Forces of the republic of belarus continue to carry out the task of strengthening the protection of the section of the belarusian-Ukrainian border in the Brest and Gomel regions.
The threat of the enemy launching missile and air strikes from the territory and airspace of the republic of belarus remains.
In the Siversky region, the enemy continues to hold units of the armed forces of the russian federation in the border areas of the Bryansk and Kursk regions in order to constrain the actions of units of the Defense Forces.
The enemy fired artillery shells in the areas of Vovkivka, Yastrubyne and Popivka settlements of the Sumy oblast.
In the Slobozhansky direction, the enemy continues to conduct hostilities with the aim of holding previously occupied lines and preventing the offensive of the Defense Forces of Ukraine.
In the Kharkiv direction, the enemy carried out fire damage from tanks, barrel and rocket artillery in the areas of Karasivka, Petrivka, Bazaliivka, Rtyshchivka, Duvanka, Ivanivka, Mospanove, Lisne, Velyki Prohody, Pytomnyk, Husarivka and Chepil settlements.
Carried out remote mining of the area near Lebyazhe.
In the Slovyansk direction, the enemy shelled the areas of Velyka Komyshuvakha, Virnopilla, Adamivka, and Dovhenky with artillery.
In the Kramatorsk direction, the enemy fired from tanks and multiple rocket launchers at the regions of Sloviansk, Kramatorsk, Spirne, Donetsk, Ivano-Daryivka, Siversk, Zvanivka, and Raihorodok. Made an air strike near Vesele.
It led an offensive in the Mykolaivka-Vyimka direction, was unsuccessful, withdrew.
In the direction of Bakhmut, shelling was recorded near Bakhmut, Soledar, Rozdolivka, Kodema and Mayorsk.
The occupiers launched an offensive in the directions of Volodymyrivka – Soledar, Pokrovske – Bakhmutske, Pokrovske – Bakhmut, Klynove – Bakhmut, Semihirya – Zaitseve, Semihirya – Kodema and Holmivskyi – Zaitseve. The invaders did not achieve any positive results in any of the offensive directions and withdrew with losses.
In the Avdiivka direction, the enemy fired from barrel, rocket artillery, and tanks near Avdiivka, Maryinka, Alexandropil, Pisky, Pervomaiske, and Opytne.
It led an offensive in the direction of Lozove – Pervomaiske, was unsuccessful, withdrew.
On the Novopavlivskyi and Zaporizhzhia directions, the enemy is defending the occupied areas. Shelled the areas of settlements of Novosilka, Novomykhailivka, Bohoyavlenka, Stepnohirsk, Shevchenko, Burlatske, Zaliznychne, Hulyaipilske, Lukyanivske, Preobrazhenka, Poltavka.
Conducted aerial reconnaissance of UAVs near Poltavka, Hulyaipole, Malynyivka, Zelenyi Hay, Shcherbaki and Novoyakovlivka.
It tried to conduct assaults in the direction of Yehorivka – Shevchenkove, was unsuccessful, withdrew.
In the South Buh direction, the main efforts of the enemy’s forces are focused on holding the occupied areas and restraining the actions of the Defense Forces of Ukraine.
Shelling was recorded near the settlements of Mykolaiv, Stepova Dolyna, Luch, Posad-Pokrovske, Halytsynove, Oleksandrivka, Myrne, Shyroke, Kvitneve, Kiselivka, Kobzartsi, Pervomaiske, Kavkaz, Murakhivka, Andriivka, Osokorivka, Ivanivka, and Trudolyubivka.
The enemy carried out airstrikes near Bila Krynytsia, Blahodatny, and Khutirska creek.
Conducted aerial reconnaissance by UAVs in the areas of Bilohirka, Lozove, Pervomaiske, Oleksandrivka, Trudolyubivka, Osokorivka and Ivanivka settlements.
According to available information, two sea-based cruise missile carriers are ready to use high-precision weapons.

Russian Defence Ministry report on the progress of the special military operation in Ukraine
The Armed Forces of the Russian Federation continue the special military operation in Ukraine.
The enemy suffers significant losses.
As a result of use of Russian Aerospace Forces operational-tactical aviation near Avdeevka, 37th Battalion of 56th AFU Motorized Infantry Brigade has completely lost its combat effectiveness. Personnel losses have exceeded 60 per cent. Donetsk Task Force command has withdrawn the battalion’s remnants to the rear for re-forming.
Russian Aerospace Force’s high-precision guided strikes on manpower and military equipment concentrations of 18th Battalion of 35th Marines‘ Brigade of AFU near Belaya Krynitsa and Velikoye Artakovo have eliminated over 80 nationalists and injured more than 50.
High-precision ground-based weapons have hit a temporary foreign mercenary base in Kharkov. More than 90 militants have been eliminated.
Army aviation strike of the Russian Aerospace Forces against a temporary deployment point of 1st Battalion of 28th Mechanized Brigade of AFU has destroyed about 60 nationalists and 8 units of special vehicles near Posad-Pokrovske, Nikolaev Region.
As a result of concentrated artillery strikes of the Russian troops on combat positions of 95th Airborne Assault Brigade of AFU near Mazanovka in Donetsk People’s Republic, more than 250 nationalists have been eliminated.
Operational-tactical and army aviation, missile troops and artillery strikes continue against military facilities in Ukraine.
5 AFU command posts have been hit, including those of 72nd Mechanized Brigade near Artemovsk, 46th Airmobile Brigade near Belaya Krinitsya in Kherson Region, as well as 234 areas of AFU manpower and military equipment concentration.
3 missile and artillery weapons and ammunition depots near Zvanovka, Vasyukovka in Donetsk People’s Republic and Bereznevatoye in Nikolaev Region have been destroyed.
Russian air defence means have destroyed 10 Ukrainian unmanned aerial vehicles near Yegorovka, Staromlynovka, Novogrodovka in Donetsk People’s Republic, Yakovenkovo, Lesnaya Stenka, Zeleniy Gai, Kochubeyevka in Kharkov Region, Bezymennoye, Charivnoye and Bruskinskoye in Kherson Region.
In addition, 3 shells of multiple rocket launchers have been shot down near Topolskoye and Suligovka, Kharkov Region.
In total, 267 Ukrainian airplanes and 148 helicopters, 1,757 unmanned aerial vehicles, 366 anti-aircraft missile systems, 4,340 tanks and other armored combat vehicles, 800 multiple launch rocket systems, 3,312 field artillery and mortars, as well as 4,938 units of special military vehicles were destroyed during the operation.

The operational update regarding the #russian_invasion on 18.00, on August 18, 2022
The one hundred seventy sixth (176) day of the heroic resistance of the Ukrainian people to a russian military invasion continues.
The enemy continues to focus its efforts on establishing full control over the territories of Luhansk and Donetsk oblasts, holding captured Kherson oblast and parts of Kharkiv, Zaporizhzhia, and Mykolayiv oblasts, restoring the combat capability of units that have suffered losses, and preventing a possible counteroffensive by the Defense Forces.
The situation remained unchanged in the Volyn, Polissya, and Siversky directions. The enemy fired from barrel artillery in the areas of Studenok, Pavlivka and Velyka Pysarivka settlements of the Sumy region.
In the Kharkiv direction, the enemy is trying to hold the occupied positions, carry out measures to restore the combat capability of the units that have suffered losses, replenish the supplies of logistical support for the troops. Replenished the grouping with a battalion tactical group and deployed additional electronic warfare systems.
Enemy employed tanks, barrel artillery and multiple rocket fire systems for shelling the areas of the settlements of Udy, Kalynove, Slatyne, Derhachi, Pytomnyk, Bazaliivka, Ruska Lozova, Ruski Tyshky, Cherkaski Tyshki, Petrivka, Kutuzivka, Staryy Saltiv, Ivanivka, Husarivka, Pechenyhy, Lebyazhe, Korobochkyne, Stara Hnylytsia, Slobozhanske, Chepil and Velyki Prohody. The occupiers also carried out airstrikes near Verkhnyi Saltiv, Stariy Saltiv and Baranivka.
In the Slovyansk direction, the enemy fired from barrel and jet artillery near Hrushuvakha, Velyka Komyshuvakha, Krasnopilla, Dibrivne, Virnopilla, Brazhivka, Chervone, Adamivka, Mazanivka, Nortsivka, Dolyna, and Bohorodychne.
In the Kramatorsk direction, shelling was recorded near Siversk, Serebryanka, Rozdolivka, Hryhorivka, Spirne, Verkhnyokamyanske, Zvanivka, Ivano-Daryivka, Fedorivka, Berestove, Vesele, and Kryva Luka. In addition, the enemy carried out an air strike near Spirne.
The occupiers made an unsuccessful attempt to attack in the Mykolaivka-Vyimka direction. They suffered losses and retreated.
In the Bakhmut direction, the enemy shelled the areas of Bakhmut, Soledar, Zaytseve, Yakovlivka, Kodema, Bilohorivka, Vershyna and Zalizne settlements from tanks and artillery of various types. Used aviation for strikes on the districts of Soledar, Bakhmut, Yakovlivka, Zaytseve, Pokrovske, Vesela Dolyna and Bilohorivka.
With offensive and assault actions, the enemy tried to break through the defense of our troops and advance from the districts of Volodymyrivka, Pokrovske, Klynove, Semihirya and Holmivskyi in the direction of the city of Bakhmut. Had no success, left.
In the Avdiivka direction, the areas of the settlements of Avdiivka, Maryinka, Krasnohorivka, Pisky, Opytne, Pervomaiske, Nevelske, Kamianka, Vesele, Novobakhmutivka, Netaylove, New York and Yuryivka were hit by fire from tanks, barrel and rocket artillery.
russian occupiers used aviation to strike directly at the settlement of Krasnohorivka.
The enemy made unsuccessful attempts to improve the tactical position in the directions of Verkhnotoretske – Kam’yanka, Novoselivka Druha – Avdiivka, Pisky – Pervomaiske and Lozove – Pervomaiske.
In the Novopavlivka direction, shelling was recorded near Pavlivka, Volodymyrivka, Velika Novosilka, Vuhledar, Vremivka, Novomykhailivka, Prechystivka, and Zolota Nyva. The occupiers also carried out an airstrike near Vuhledar.
With offensive actions, the enemy tried to improve the tactical position in the Taramchuk-Vodyane direction. It was strongly repulsed and retreated.
In the Zaporizhzhia direction, shelling from all available means of fire along the contact line did not stop. The enemy used aviation near Shcherbaky, Zaliznychne and Novoandriivka.
In the South Buh direction, enemy units continue to focus their efforts on holding occupied positions and preventing the Defense Forces from creating favourable conditions for counteroffensive actions.
The occupiers strengthened the group with forces up to two battalion tactical groups due to the reserve and the transfer of individual units from other directions.
The enemy launched airstrikes near Bilohirka, Bila Krynytsia and Lozove. The Air Force pays a lot of attention to aerial reconnaissance.
Two enemy sea-based cruise missile carriers are ready to use high-precision weapons.
Ukrainian defenders are inflicting losses on the russian occupiers in all directions where active hostilities are ongoing.