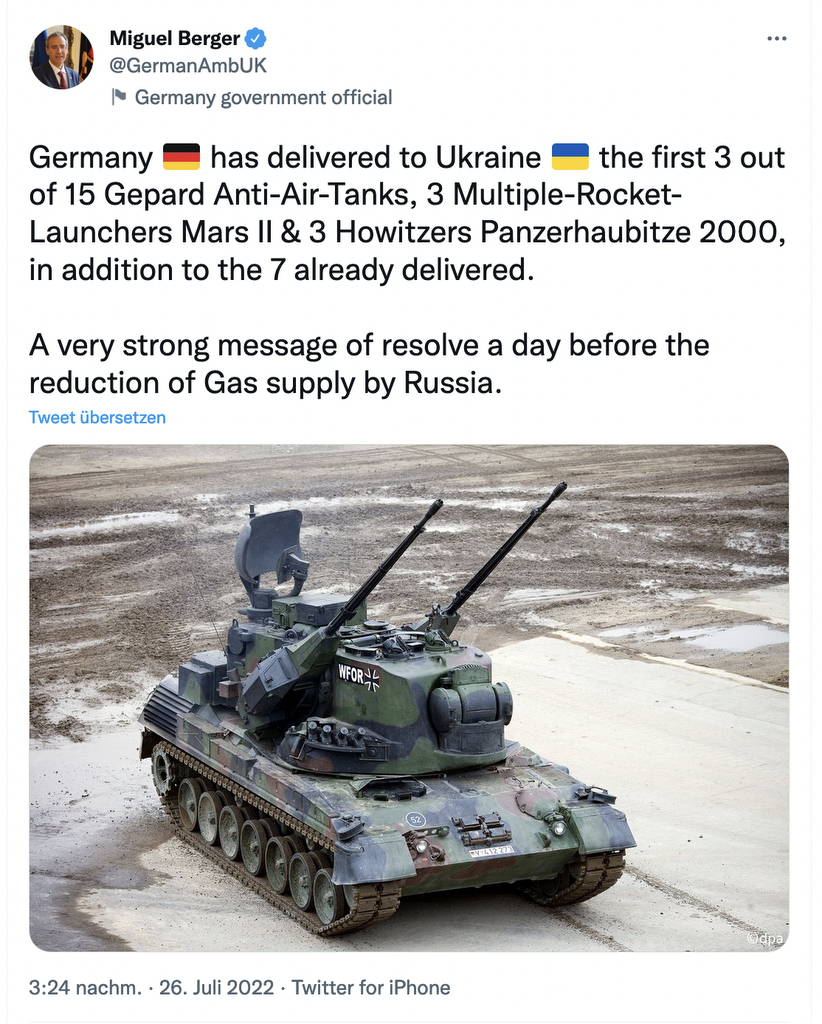 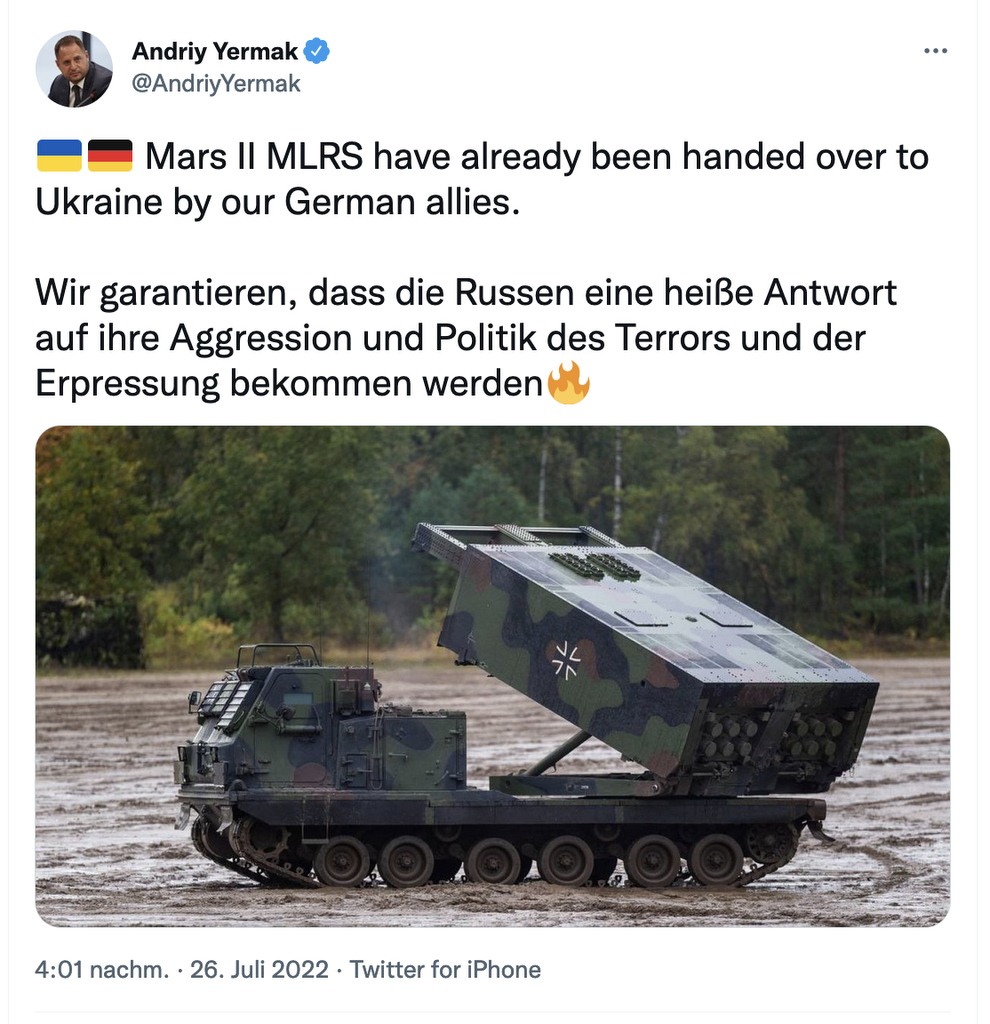 On 24 July 2022, Russian cruise missiles hit the dock-side in Ukraine’s Odesa Port. The Russian MoD claimed to have hit a Ukrainian warship and a stockpile of anti-ship missiles. There is no indication that such targets were at the location the missiles hit.
Russia almost certainly perceives anti-ship missiles as a key threat which is limiting the effectiveness of their Black Sea Fleet. This has significantly undermined the overall invasion plan, as Russia cannot realistically attempt an amphibious assault to seize Odesa.
Russia will continue to prioritise efforts to degrade and destroy Ukraine’s anti-ship capability. However, Russia’s targeting processes are highly likely routinely undermined by dated intelligence, poor planning, and a top-down approach to operations.

Operational update regarding the #russian_invasion as of 06:00, on July 26, 2022
The one hundred fifty-third (153) day of the heroic resistance of the Ukrainian people to a russian military invasion continues.
In the Volyn and Polissya directions, in the armed forces of the republic of belarus, training was held on the communication of control points. From the territory of this country, the conduct of aerial reconnaissance by UAVs of the operational-tactical level in the directions of the cities of Lutsk and Kovel of the Volyn region was noted. The threat of missile and air strikes from the territory and airspace of the republic of belarus remains.
In the Siversky direction, the enemy shelled the areas of Khrinivka, Chernihiv obkast, and Tovstodubovo, Sumy obkast, with barrel and jet artillery.
In the Slobozhansky direction, the enemy is conducting combat operations with the aim of holding the occupied lines and preventing the advance of our troops.
In the Kharkiv direction, it carried out fire damage from tanks, barrel and rocket artillery in the areas of the settlements of Borshcheva, Pytomnyk, Sosnivka, Ruski Tyshki, Petrivka, Dementiivka, Rubizhne, Duvanka, Mospanove, Ruska Lozova, Chuhuiv, Klugino-Bashkyrivka, Svitlychne, Pryshyb and Slatine. It carried out airstrikes near Zalyman and Mospanove.
In the Slovyansk direction, the enemy shelled the districts of Nortsivka, Bohorodychne, Dolyna, Chepil, Hrushuvaha, and Velyka Komyshuvakha.
In the Donetsk direction, the enemy is concentrating its main efforts on trying to improve the tactical position and creating conditions for an offensive on the cities of Siversk and Soledar. Enemy units replenish stocks of ammunition and fuel and oil.
In the Kramatorsk direction, shelling from barrel and jet artillery was recorded near Kryvya Luka, Zakitne, Dronivka, Hryhorivka, Verkhnyokamyanske, Zvanivka, Spirne and Pereizne. The enemy launched airstrikes near Spirne and Serebryanka. Our soldiers successfully repelled enemy assaults in the areas of Spirne and the National Nature Park „Svyati Hory“ and pushed the enemy back.
In the direction of Bakhmut, the enemy is firing artillery in the areas of the settlements of Berestove, Bilohorivka, Yakovlivka, Soledar, Bakhmutske, Pokrovske, Kostyantynivka, Vesela Dolyna, Zaitseve, Vershyna, Semihirya, Kodema, Travneve, Mayorsk and New York. It carried out airstrikes near Soledar, Vesela Dolyna and the territory of the Vuhlehirska TPP.
Assault actions in the areas of the settlements of Berestove and Semihirya ended with losses and retreat for the enemy. But enemy units are trying to advance in the direction of Pokrovske, hostilities continue.
The enemy did not conduct active operations in the Avdiyivka, Novopavlivka, and Zaporizhzhia directions. Shelling was recorded, in particular, near Avdiyivka, Zelene Pole, Orikhove, Shcherbaky and Kamianske.
In the South Buh direction, the enemy continues to defend himself, concentrates his efforts on preventing the advance of our troops. Fired artillery and tanks along the contact line. It also carried out airstrikes near Velyke Artakove, Kaluha, and Olhyne. Conducted aerial reconnaissance with the UAVs.
In the waters of the Black Sea, outside the base points, there are two carriers of sea-based cruise missiles of the „Kalibr“ type. There is still a threat of missile strikes on critical infrastructure facilities.
Our planes and helicopters continue to carry out airstrikes against concentrations of enemy manpower and military equipment in designated directions. The occupiers continue to suffer significant losses in battles with Ukrainian soldiers.

Operational update regarding the #russian_invasion as of 18:00, on July 26, 2022
The one hundred fifty-third (153) day of the heroic resistance of the Ukrainian people to a russian military invasion continues.
In the Volyn and Polissya directions, the restriction on visiting forests by the civilian population in the border areas of the republic of belarus with Ukraine continues. The operational-tactical level of aerial reconnaissance by UAVs in the border regions of the Volyn region is noted.
In the Siversky direction, the enemy shelled civilian and military infrastructure in the areas of Znob-Novhorodske, Khrinivka, Senkivka and a number of other settlements. Conducted aerial reconnaissance near Znob-Novhorodske.
In the Kharkiv direction, the enemy carried out fire damage from barrel and rocket artillery, in particular near Borshchova Sosnivka, Petrivka, Rubizhne, Mospanove, Chuhuyiv, Svitlychne, and Slatyne. Carried out airstrikes near Zalyman, Mospanove and Yavirske. With the forces of the reconnaissance group, the enemy tried to reveal the construction of the defense of our troops in the area of Chepil settlement. The occupants were neutralized.
In the Slovyansk direction, the enemy shelled the areas of Nortsivka, Dolyna, Hrushuvaha, Krasnopilla, Mazanivka and other settlements with barrel, rocket artillery and tanks. It tried to advance near Bohorodychne, was unsuccessful, and withdrew.
In the Kramatorsk direction, artillery shelling was recorded near Raihorodok, Zakitne, Serebryanka, Verkhnyokamyanske, Vyimka, Pereizne and Bilohorivka. The enemy launched an air strike near Hryhorivka.
It unsuccessfully tried to scout the positions of the Defense Forces in the Verkhnokamyanske area.
Ukrainian soldiers successfully repelled the occupiers‘ attempt to improve the tactical position in the Ivano-Daryivka area and forced the enemy to flee.
In the direction of Bakhmut, the enemy fired at military and civilian infrastructure in the districts of Berestove, Soledar, Pokrovske, Vesela Dolyna, Vershyna, Kodema, Mayorsk and Toretsk. Cynically carried out airstrikes directly on the settlements of Pokrovske and Novoluhanske.
Our defenders successfully repelled enemy assault attempts in the districts of Berestove, Soledar and Semihirya. Fighting with an assault group continues in the Pokrovsky area.
The enemy did not conduct active operations in the Avdiyivka, Novopavlivka, and Zaporizhzhia directions. It carried out systematic shelling of civilian and military infrastructure in the areas of the settlements of Vesele, Pisky, Krasnohorivka, Novomykhailivka, Pavlivka, Shevchenko, Velyka Novosilka, Novopilla, Malynivka, Novoselivka, Novoandriivka, Mali Shcherbaky and a number of others.
Made an airstrike near Malynivka. The occupiers also carried out assaults in the areas of Pavlivka and Blahodatne villages. They were repulsed and retreated with losses.
In the South Buh direction, the enemy continues to focus its main efforts on holding the occupied positions and preventing the advance of our units. The enemy actively conducts aerial reconnaissance by UAVs and fires along the contact line.
The adversary has a systematic problem with personnel replenishment – the russian federation is already trying to recruit mercenaries from among citizens of Central Asian countries, representatives of remote regions and imprisoned criminals.