In the Donbas, Russian and pro-Russian Luhansk People’s Republic separatist forces claim to have entered the outskirts of Siversk.
This has not been corroborated, however, Russian forces have been slowly advancing westwards following shelling and probing assaults towards Siversk from Lysychansk to open a pathway onward to Sloviansk and Kramatorsk.
Bakhmut is likely to be the next objective, once Siversk is secured.
Since withdrawing from the strategically located Snake Island on 30 June 2022, Russia has been attempting to deny its use by Ukraine.
However, on 13 July 2022 airstrikes by two Su-27 Russian fighter jets failed to hit the island. This follows the pattern of Russian air forces failing to successfully engage in the tactical battle.
Over 2.5m people have now been evacuated from Ukraine to Russia since the start of the invasion. Russia continues to face accusations that it is forcibly deporting Ukrainians; in many cases Ukrainians have reportedly been mistreated in filtration camps set up by Russia.

Operational update regarding the #russian_invasion as of 06:00 on July 15, 2022
The one hundred forty-second (142) day of the heroic resistance of the Ukrainian people to a russian military invasion continues.
There are no significant changes in the activities of the armed forces of the republic of belarus were noted in the Volyn and Polissya directions.
In the Siversky direction, the enemy continues to carry out enhanced protection of the section of the Ukrainian-russian border. In order to demonstrate their presence, the enemy periodically fires at the positions of our troops in the border areas of Chernihiv and Sumy oblast.
In the Kharkiv direction, the enemy is trying to hold the occupied areas and prevent our troops from advancing towards the state border. Fired tanks, mortars, barrel and jet artillery in the areas of the settlements of Petrivka, Rydne, Sosnivka, Slatyne, Pryshyb, Ruski Tyshky, Pytomnyk, Verkhniy Saltiv and others. Conducted aerial reconnaissance with an operational-tactical Orlan-10 UAV near Prymorske.
In the Slovyansk direction, the enemy is trying to improve the tactical position and conduct offensive actions in the direction of Slovyansk. The areas of Dibrivne, Podolivka, Mazanivka, Adamivka, Chepilya, Krasnopillya, Kurulka and others were shelled with artillery.
In the Donetsk direction, the enemy continues to fire on units of the Defense Forces of Ukraine from artillery and tanks along the contact line. Conducts reconnaissance, trying to find weak points in the defense of our troops. It concentrates its main efforts on the Bakhmut and Novopavliv directions, tries to advance in the direction of Soledar and Bakhmut.
In the direction of Kramatorsk, the enemy is regrouping in order to resume the offensive in the direction of Siversk. The Kramatorsk, Zakitne, Hryhorivka, and other districts were shelled from barrel and rocket artillery. Airstrikes near Verkhnokamyanske.
In the Bakhmut direction, it shelled our positions, in particular, in the areas of the settlements of Novoluhanske, Pokrovske, Vesela Dolyna, Berestove, Vesele, Mayorsk, and Vershyna. It carried out airstrikes near Semihirya, Berestove and the territory of the Vuhlehirska TPP. Our soldiers successfully stopped enemy assault attempts in the area of Kodema and Bilohorivka, as well as attempts to capture the villages of Spirne and Vershyna. The occupiers received stiff resistance, suffered significant losses and withdrew ingloriously.
The enemy engaged UAVs near Bakhmutskyi. Also, the enemy is trying to strengthen the air defense system of rear bases and units.
In the Kurakhiv, Novopavliv, and Zaporizhzhia areas, the invaders did not conduct active actions, they continued shelling along the contact line. They carried out airstrikes near Kamianka. Our defenders quickly suppressed an attempted enemy offensive near Vodyane with accurate fire. The enemy launched a missile-aircraft attack on civilian infrastructure in the Vuhledar area.
The occupiers systematically bombarded civilian and military infrastructure in the South Buh direction. They carried out a missile attack on Mykolaiv and airstrikes in the areas of Velyke Artakove and Olhino.
The enemy conducted aerial reconnaissance with unmanned aerial vehicles of the operational-tactical and tactical levels and continued the engineering equipment of the positions. There remains a significant threat of missile strikes on critical infrastructure in the region.
russian occupiers, in order to somehow justify the destruction of civilian objects on the territory of Ukraine, continue to openly lie about the location of military units in kindergartens, hospitals and churches.
We urge you to trust information only from verified sources and not to spread russian fakes and disinformation.

Russian Defence Ministry report on the progress of the special military operation in Ukraine
The Armed Forces of the Russian Federation continue the special military operation in Ukraine.
High-precision attacks launched at provisional bases of 40th Artillery Brigade and Kraken nationalist group deployed in Kharkov have resulted in the elimination of up to 200 nationalists, including about 50 foreign mercenaries and 19 units of armament and military equipment.
Pinpoint attacks of Russian Aerospace Forces launched at the bases of Right Sector nationalist group deployed in Artyomovsk (Donetsk People’s Republic) have resulted in the elimination of about 300 nationalists and up to 30 units of armoured and special motor vehicles.
Attack launched at a provisional base of 45th Artillery Brigade of the Armed Forces of Ukraine (AFU) deployed near Shcherbaki (Zaporozhye region) has resulted in the elimination of barracks with over 70 servicemen.
Artillery units have eliminated up to 70 nationalists and 11 armoured vehicles of 128th Mountain Assault Brigade of the AFU near Lugovoye and Novoandreyevka (Zaporozhye region).
On July 14, Kalibr high-precision sea-based missiles were launched at the House of Officers of the garrison in Vinnitsa.
The facility hosted a conference of the Ukrainian Armed Force command with representatives of foreign armament suppliers aimed at discussing the issues on sending another batch of aircraft, destruction means, as well as on organising the reparation of Ukrainian aircraft. The attack has resulted in the elimination of the conference participants.
High-precision attacks of Russian Aerospace Forces have resulted in the elimination of 5 command posts and signal nodes, including 1 of 10th Air Assault and 1st Tank Brigade of the AFU near Praskovievka (Donetsk People’s Republic) and Prosianaya (Dnepropetrovsk region), 1 launching ramp of Buk-M1 air defence missile system near Sol (Donetsk People’s Republic), as well as 43 areas of manpower and military equipment concentration.
Within the counter-battery warfare, 2 plattoons of Ukrainian MRLS, 2 Giatsint-B artillery plattoons near Dzerzhinsk (Donetsk People’s Republic), as well as 84 areas of artillery units have been neutralised.
Operational-tactical and army aviation, missile troops and artillery have neutralised 18 command posts, as well as 211 areas of manpower and military equipment concentration.
Fighter aviation of Russian Aerospace Forces has shot down 2 MiG-29 airplanes of Ukrainian Air Force near Slavyansk and Druzhkovka (Donetsk People’s Republic).
Russian air defence means have shot down 2 Su-25 airplanes of Ukrainian Air Force near Barmashovo (Nikolayev region), as well as 9 Ukrainian unmanned aerial vehicles near Balakleya, Izyum, Peschanoye, Ternovaya (Kharkov region), Novaya Kakhovka (Kherson region) and Vesyolaya Tarasovka (Lugansk People’s Republic).
In addition, 9 projectiles launched by Uragan MRLS have been intercepted near Khartsyzsk, Korovy Yar, Khanzhenkovo (Donetsk People’s Republic), Andreyevka (Kharkov region) and Tomarino (Kherson region).
In total, 253 airplanes and 137 helicopters, 1,543 unmanned aerial vehicles, 355 air defence missile systems, 4,060 tanks and other armoured combat vehicles, 746 combat vehicles equipped with MRLS, 3,147 field artillery cannons and mortars, as well as 4,341 units of special military equipment have been destroyed during the special military operation. 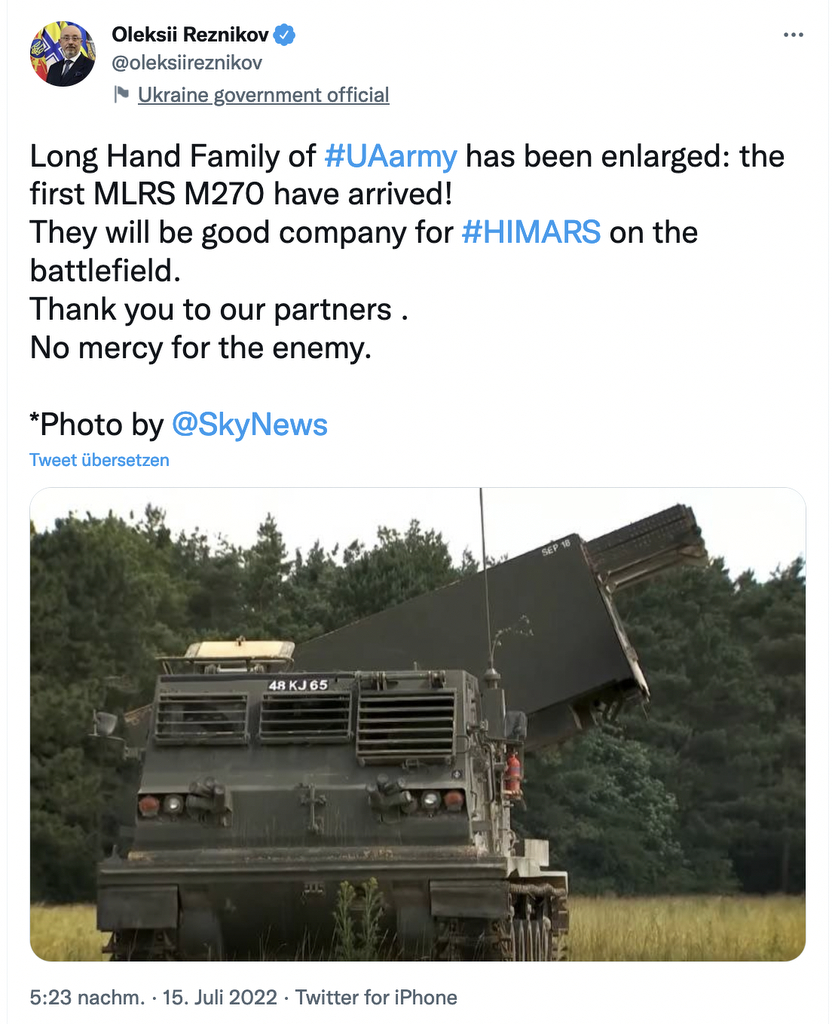