President Biden’s national security adviser said on Monday that Russia was seeking hundreds of surveillance drones from Iran, including those capable of firing missiles, to use in the war in Ukraine.
The official, Jake Sullivan, said that it was unclear whether Iran had already sent any of the remotely piloted systems to Russia, but that the United States had information that indicated Iran was preparing to train Russian troops to use them as soon as this month.
“Our information indicates that the Iranian government is preparing to provide Russia with up to several hundred U.A.V.s, including weapons-capable U.A.V.s on an expedited timeline,” Mr. Sullivan told reporters at the White House, referring to unmanned aerial vehicles.

And I would also point out, when I talked about the severe costs that Russia has had to endure on the battlefield as it tries to grind out territory in the east, this is coming at a cost to the sustainment of its own weapons.
And I’ll just give you one example before I leave, which is an example that I think is pretty newsworthy and noteworthy, and that is that our information indicates that the Iranian government is preparing to provide Russia with up to several hundred UAVs, including weapons-capable UAVs, on an expedi- — expedited timeline.
Our information further indicates that Iran is preparing to train Russian forces to use these UAVs with initial training sessions slated to begin as soon as early July.
It’s unclear whether Iran has delivered any of these UAVs to Russia already. But this is just one example of how Russia is looking to countries like Iran for capabilities that are also being used, I might add, or have been used before we got the ceasefire in place in Yemen, to attack Saudi Arabia.

Russian troops continue to make small incremental territorial gains in Donetsk oblast with Russia claiming to have seized control of the town of Hryhorivka.
Russian forces also continue their assault along the E-40 main supply route towards the cities of Slovyansk and Kramatorsk.
Russian forces are likely maintaining military pressure on Ukrainian forces whilst regrouping and reconstituting for further offensives in the near future.
Russian Armed Forces’ personnel shortages may be forcing the Russian MOD to turn to non-traditional recruitment. This includes recruiting personnel from Russian prisons for the Wagner Private Military Company.
If true, this move likely indicates difficulties in replacing the significant numbers of Russian casualties.

Operational update regarding the #russian_invasion as of 06:00 on July 12, 2022
The one hundred thirty ninth (139) day of the heroic resistance of the Ukrainian people to a russian military invasion continues.
The situation has not changed significantly in the Volyn, Polissya and Siversky directions. On the last one, the enemy shelled the area of Starykovo settlement of Sumy oblast with rocket artillery.
In the Kharkiv direction, the enemy fired artillery and rocket salvo fire systems in the districts of the city of Kharkiv and the settlements of Ruski Tyshki, Bezruky, Dementiivka, Lisne, Slatyne, Prudyanka, and Zolochiv.
Ukrainian defenders harshly suppressed the enemy’s assault attempt in the direction of Dementiivka.
In the Slovyansk direction, the enemy’s units continued their assault operations with the aim of improving the tactical position in the areas of Mazanivka, Ivanivka, and Dolyna. All the actions of the enemy in the direction of these settlements were unsuccessful. Our soldiers drove the invaders back.
The enemy shelled the areas of Chepil, Velyka Komyshuvakha, Barvinkove, Dibrovne, Mazanivka, Bohorodychnye and Adamivka settlements with barrel artillery and rocket salvo fire systems.
The enemy is trying to improve the tactical position in the Bakhmut and Novopavlivka directions. Carries out systematic fire influence on positions along the contact line with the aim of restraining the actions of units of the Defense Forces of Ukraine. Uses attack and army aviation. Fortification equipment of advanced positions is carried out in some areas.
The enemy did not conduct active operations in the Slovyansk direction. Artillery shelling near Starodubivka, Mayaki, Raihorodok, Siversk, Kryva Luka, Donetsk, Verkhnokamyanske, Spirne and an airstrike near Serebryanka were recorded.
In the Bakhmut direction, the enemy fired from tanks, barrel and jet artillery in the areas of Yakovlivka, Berestove, Pokrovske, Soledar, Bilohorivka, Vershyna, Novoluhanske, Kodema, Bakhmut and Vesela Dolyna settlements. Airstrikes near Berestove, Bilohorivka, and Vershyna.
In the Avdiyivka, Kurakhivka, Novopavlivka, and Zaporizhzhia directions, the occupiers are shelling the districts of Avdiivka, Maryinka, Novomykhailivka, Novoselivka, Opytne, Novobakhmutivka, Vuhledar, Hulyaipole, Zaliznychne, Mala Tokmachka, Orikhove, Stepove, and Kamianske. An airstrike was carried out near Novoandriyivka by a pair of Su-25 aircraft.
In the South Buh direction, the enemy is concentrating its efforts on holding the occupied borders and preventing the offensive of units of the Defense Forces of Ukraine. In order to constrain the actions of our troops, it conducted artillery fire in the areas of the settlements of Stepova Dolyna, Lupareve, Nova Zorya, Novohryhorivka, Lyubomyrivka, Osokorivka, Olhyne, Velyka Kostromka, Karyerne, Ternivka, Polyana, Kiselivka, Pervomayske, Shevchenkove, Posad- Pokrovske, Ukrainka and Prybuzke. It carried out airstrikes near Zarichne.
In the water area of the Black and Azov seas, the enemy continues to keep the Kalibr sea-based cruise missile carrier in readiness for missile strikes on objects on the territory of Ukraine.
Ukrainian aviation and missile and artillery units continue to fire at the ammunition depots, concentrations of manpower and military equipment of russian occupiers.

Russian Defence Ministry monitors and records by name all foreign mercenaries who have arrived in Ukraine to take part in combat operations.
As we have already mentioned, contrary to the false claims of the Kiev regime about allegedly 20,000 of foreign mercenaries arriving to Ukraine, their actual number is much lower. Moreover, it is steadily declining.
Over the past three weeks, the number of mercenaries in Ukraine has decreased from 3,221 to 2,741 as a result of the offensive actions of the units of the Russian Armed Forces and people’s militia of Lugansk and Donetsk republics.
During this time, despite the arrival of another 151 mercenaries, 391 militants have been killed. Another 240 „wild geese“ rushed to flee outside Ukraine.
Poland again tops the list in terms of the speed and number of fighters killed during the period, with 166 Polish fighters killed. Among the Georgian representatives, 50 „soldiers of fortune“ were killed, UK lost another 23 mercenaries in Ukraine. Also, 21 Romanian and 15 Canadian fighters were killed in three weeks.
Updated data on the count of foreign mercenaries currently in Ukraine has been published on the Russian Defence Ministry’s information resources on the Internet.
Once again, the Russian Armed Forces are identifying foreign mercenaries even as they prepare to enter Ukraine.
I will give one example.
On July 6, two British citizens, Colin Scott and Adrian Davis, and three US citizens, Michael Vujkovic, Andrew Fox and Oliver Short, arrived at the foreign mercenary collection and accommodation centre located at 1 Kozmian street in Poland’s Zamość city. We advise these citizens to come to their senses and return home alive.
Let me remind you that under International Humanitarian Law, all foreign mercenaries are non-combatants and the best that awaits them if captured alive is a trial and maximum terms of imprisonment. 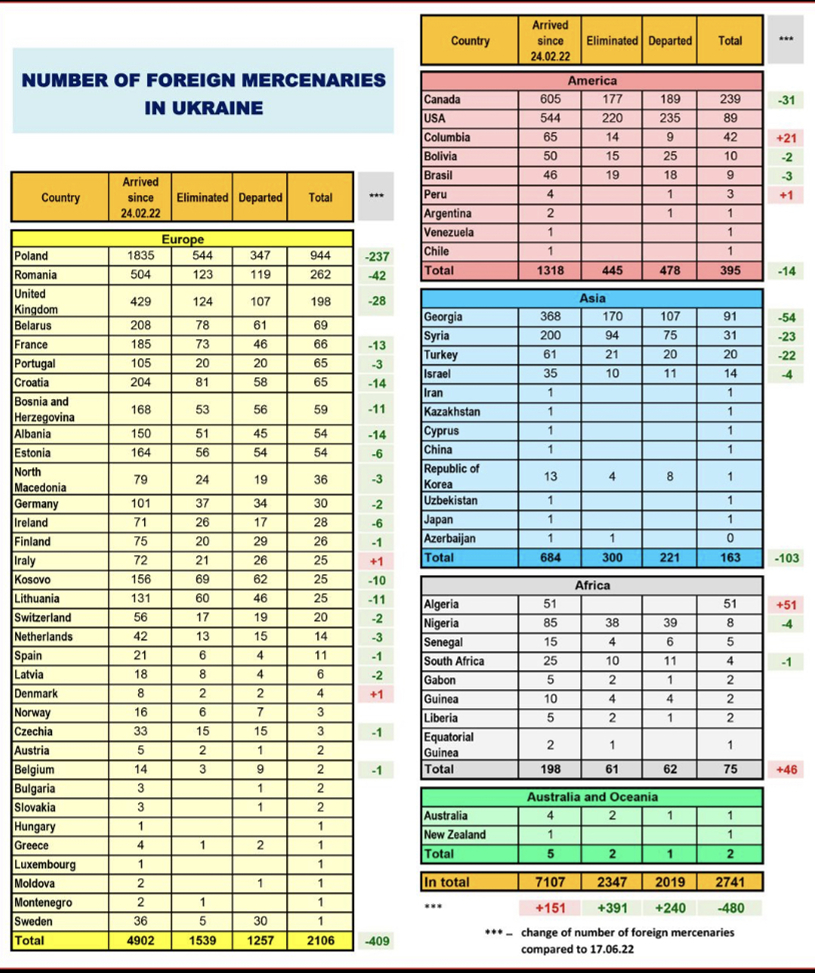 Operational update regarding the #russian_invasion as of 18:00 on July 12, 2022
The one hundred thirty-ninth (139) day of the heroic resistance of the Ukrainian people to a russian military invasion continues.
In the Volyn and Polissya directions, the intensification of reconnaissance in order to clarify the positions and nature of the activities of our troops in the areas bordering the republic of belarus is not excluded.
In the Siversky region, the enemy continues to hold units of the armed forces of the Russian Federation in the border areas of the Bryansk and Kursk regions in order to demonstrate their presence and restrain the actions of units of the Defense Forces. Enemy artillery shelled the settlements of Starykove and Nova Sloboda of the Sumy oblast and Mykolayivka and Karpovychi of the Chernihiv oblast. In this direction, the enemy is actively using UAVs and means of radio-electronic warfare.
In the Kharkiv direction, the enemy carried out artillery shelling of the city of Kharkiv and the settlements of Sosnivka, Stara Hnylytsia, Ukrainka, Zamulivka, Petrivka, Cherkassky Tyshki, Korobochkine, Prudyanka, Chornoglazivka, Kutuzivka, Stary Saltiv, Nove, Bayrak, Dementiivka and Zolochiv.
The occupiers tried to dislodge our troops from the Dementiivka district. But our soldiers successfully repelled several assaults on the mentioned village and forced the enemy to retreat.
In the Slovyansk direction, the invaders shelled the areas of the settlements of Dibrovne, Mazanivka, Adamivka, Barvinkove, Husarivka, Velyka Komyshuvakha, Nova Dmytrivka, Khrestyshche, Nikopol, Sulihivka, and Kostyantynivka.
Enemy units conducted assaults to improve the tactical position near Krasnopilla, Dovhenke, Mazanivka, and Ivanivka. Ukrainian soldiers skillfully defended themselves, inflicted significant losses on the occupiers and forced them to flee. An enemy reconnaissance attempt ended with the same result in a battle near the Valley.
The enemy did not conduct active operations in the Kramatorsk direction. Fired at our positions near Mayaky, Raihorodok, Kryvya Luka, Verkhnokamyanske and Pryshyb. It also carried out airstrikes near Serebryanka and Spirne.
In the direction of Bakhmut, artillery shelling was recorded in the areas of Berestove, Soledar, Vershyna, Novoluhanske, Bakhmut, Yakovlivka, Mayorsk and airstrikes near Berestove, Bilohorivka, Vershina and Yakovlivka.
When trying to advance in the direction of Spirne – Ivano-Daryivka, the enemy suffered losses from the dagger fire of our defenders and retreated chaotically.
In the Avdiyivka, Kurakhivka, Novopavlivka and Zaporizhzhia directions, the enemy, with the aim of restraining the actions of our troops, continues shelling our positions from the available ground weapons along the entire line of contact. It also carried out an airstrike near Novoandriivka.
In the South Buh direction, the main efforts of the enemy are concentrated on holding the occupied lines. Activated air reconnaissance. The areas of the settlements of Oleksandrivka, Nova Zorya, Osokorivka, Velyka Kostromka, Murakhivka, Lyubomirivka, Polyana, Partyzanske, Blahodatne, Kalynivka, Ternivka and Prybuzke were shelled with barrel artillery.
The enemy naval group continues to block civilian shipping in the northwestern part of the Black Sea. In preparation for launching missile strikes on objects on the territory of Ukraine, the enemy maintains six carriers of high-precision weapons.