Relying solely on Soviet weapons was definitely a losing strategy.
Therefore, by turning to our partners for help, we initiated the supply of 155 mm artillery units and other heavy weapons.
Here are just a few examples that have already been publicly announced by our partners.
To this date, the Ministry of Defence of Ukraine has ensured the supply of 150 artillery platforms of 155 mm caliber to the Armed Forces of Ukraine. The stockpiles of ammunition of this caliber are already 10% larger than the stockpiles of Soviet-type large-caliber shells that existed before 24 February 2022. Moreover, these new shells are more effective than their Soviet equivalents, and hence their consumption is lower.

We have already received, bought on the market, manufactured and handed over to the Armed Forces of Ukraine a significant number of weapons. These numbers would have been enough for a victorious defence operation against any army in Europe.
But not against russia.
The russian junk has many more means in store to devour human lives in a bid to satisfy its imperial ego.
That is why we emphasize: Ukraine desperately needs heavy weapons, and very fast. We have proved that, unlike many others, we do not fear the Kremlin. But as a country we cannot afford to be losing our best sons and daughters.

Fighting continues in the Sieverodonetsk pocket but, in the last 48 hours, Russia’s Eastern Group of Forces (EGF) have also likely increased their efforts to advance to the south of Izium.
Russia’s progress on the Izium axis had remained stalled since April, after Ukrainian forces made good use of the terrain to slow Russia’s advance.
Russia has likely attempted to reconstitute EGF after they suffered very heavy casualties in the failed advance on Kyiv, but its units likely remain understrength.
Russia likely seeks to regain momentum in this area in order to put further pressure on Sieverodonetsk, and to give it the option of advancing deeper into the Donetsk Oblast. 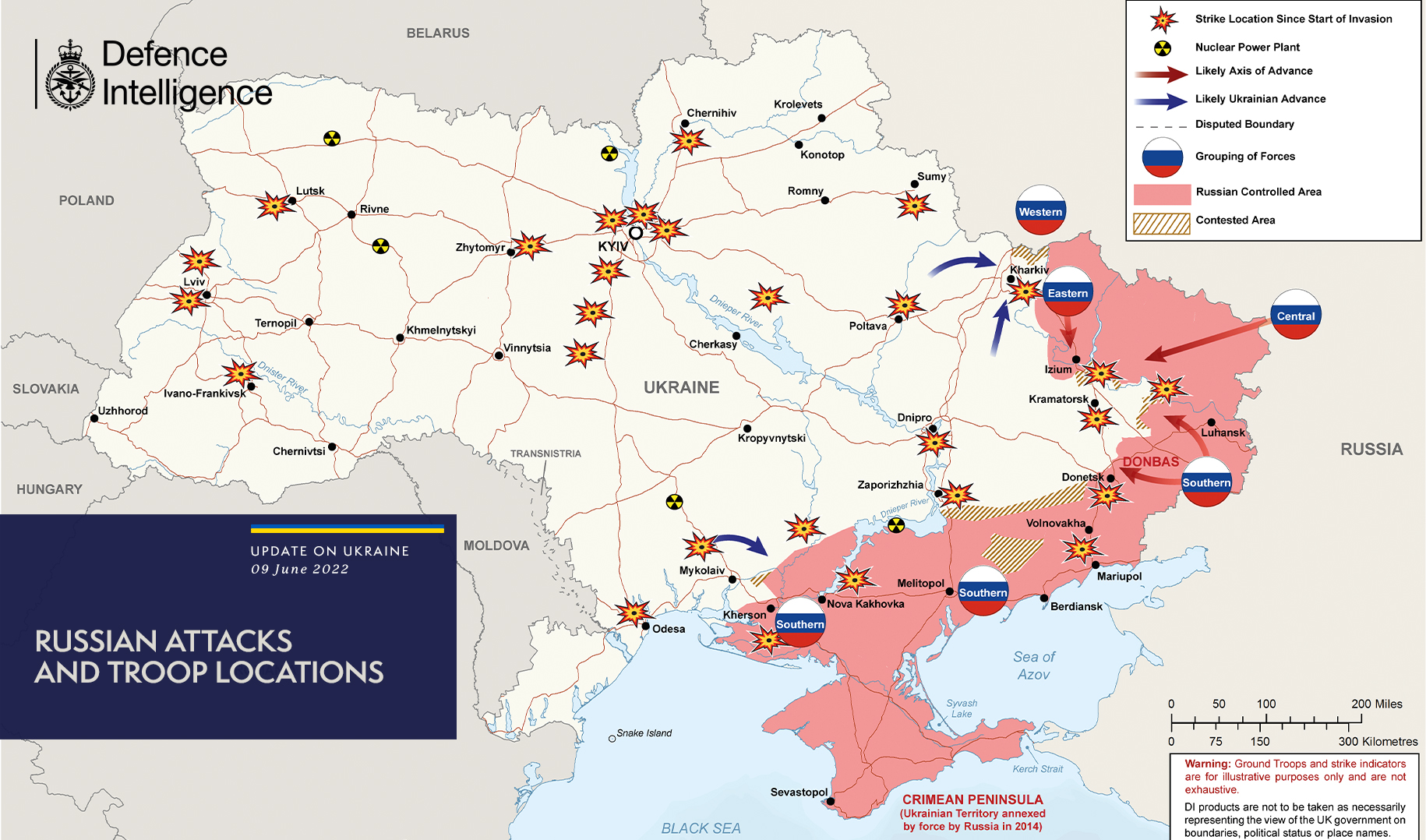 The operational update regarding the #russian_invasion on 06.00 on June 9, 2022
The one hundred sixth (106) day of the heroic resistance of the Ukrainian people to a russian military invasion continues.
In the Volyn and Polissya directions, the enemy did not take active action. The situation has not changed significantly.
As part of the inspection of combat readiness of units of the Armed Forces of the republic of belarus, the tasks of combating sabotage and reconnaissance groups of the conventional enemy are being worked out.
In the Siversky direction, the enemy continues to provide enhanced protection of the Ukrainian-russian border and fire mortars at civilian infrastructure in the border areas of Chernihiv and Sumy regions.
In the Kharkiv direction, the enemy, in order to increase the stability of the defense, conducts engineering and fortification equipment positions and mining approaches. He is conducting intensive artillery shelling of our units to restrain the actions of Ukraine’s defense forces. In addition, the enemy fired on civilian infrastructure in the areas of the settlements of Stary Saltiv, Ruski and Cherkasy Tyshky, Korobochkine, Asiivka, Chepil and Uda.
In the Slovyask direction, the enemy’s efforts are focused on preparing for the continuation of the offensive in the direction of the settlements of Slovyansk and Barvinkove. The enemy fired on civilian infrastructure in the areas of Dibrivne, Komyshuvakha and Kurulka.
Using the results of the fire, the occupiers carried out offensive and assault operations near Bohorodychne and Dovhenke, and hostilities continue.
In the Donetsk direction, the enemy, in addition to using artillery along the line of contact, fired a missile near the city of Kramatorsk.
The enemy did not take active action in the Lyman direction. It fired on Tetyanivka, Pryshyb and Serebryanka.
In the Siverodonetsk direction, the enemy fired on our units with mortars, artillery and multiple rocket launchers. It fired on civilian infrastructure in the settlements of Siverodonetsk, Lysychansk, Privillya, Ustynivka, Horske and Katerynivka. The occupiers launched an air strike on Toshkivka and carried out an unsuccessful assault. In the direction of the village of Katerynivka, Ukrainian soldiers also inflicted losses on the enemy. The enemy retreated.
The enemy continues its unsuccessful search for weaknesses in the defense of the city of Siverodonetsk.
In the Bakhmut direction, the enemy fired at the positions of our units with barrel and jet artillery near Komyshuvakha, Mykolayivka, Berestovo, Bilohorivka, Semyhirya and Mayorsky. It launched missile and air strikes in the settlements of Verkhnyokamyanka, Zolote, Berestove, Slovyansk and New York.
Using the results of fire, the enemy conducts assault operations in the area of the settlements of Roty, Mykolayivka and Komyshuvakha.
In previous battles in this direction, Ukrainian defenders inflicted heavy losses on the occupiers and the enemy was forced to withdraw to restore combat capability units of the first and hundredth separate motorized infantry brigades of the 1st Army Corps.
The enemy did not conduct active hostilities in the Avdiivka, Kurakhiv, Novopavliv and Zaporizhzhia areas. In order to restrain the actions of our units, it fired artillery and mortars along the line of contact.
In the South Bug direction, the enemy used artillery of various calibers in the areas of the settlements of Lyubymivka, Dobryanka, Bila Krynytsia, Shyroke, Bereznehuvate, Blahodatne, Lyubomyrivka and Tavriyske.
In order to improve the tactical situation, the enemy is preparing to force water obstacles. Conducted air reconnaissance of UAVs. It plans to strengthen motorized infantry units with tank companies on the T-62. In addition, it deployed units of barrel and jet artillery, as well as Tactical Operational Missile Complex „Tochka-U“ 9K79 (SS-21 Scarab).
Over the past 24hrs, the defenders of Ukraine in the Donetsk and Luhansk areas repulsed seven enemy attacks, destroyed three tanks, two armored combat vehicles and four units of enemy vehicles. Air defense units shot down six Orlan-10 unmanned aerial vehicles.
According to the available information, the personnel of the 15th separate motorized infantry brigade of the 2nd Combined Arms Army of the Central Military District suffered significant losses in the fighting on the territory of Ukraine. Approximately 800 dead and about 400 wounded. In total, about 1,800 servicemen from the brigade took part in the hostilities on the territory of Ukraine.

Engineering units of the Russian Armed Forces have started clearing roads and forest areas of the Svyatye Gory National Park near Svyatogorsk, Yarovaya, Studenok and Sosnovoe of Donetsk People’s Republic. Over the past 24 hours, 126 explosive devices of various types, including 54 anti-tank mines, planted by Ukrainian nationalists have been found and destroyed.
The Armed Forces of the Russian Federation continue the special military operation in Ukraine.
High-precision air-based missile strike near Novograd-Volynskyi, Zhytomir Region, has destroyed 1 AFU training centre where foreign mercenaries were being retrained and coordinated.
In addition, high-precision air-based missiles have destroyed 2 command posts, 1 Osa-AKM anti-aircraft missile system near Razdolovka in Donetsk People’s Republic, 1 ammunition depot near Paraskovievka in Lugansk People’s Republic, and 23 areas of AFU manpower and military equipment concentration.
Operational-tactical and army aviation have hit 18 areas of AFU manpower and military equipment concentration.
The attacks have resulted in the elimination of more than 200 nationalists, 5 tanks, 2 Grad multiple rocket launchers and 1 warehouse of missile and artillery weapons near Verkhnekamenskoe, Lugansk People’s Republic.
Russian air defence means have shot down Su-25 aircraft of Ukrainian Air Force near Mazanovka, Donetsk People’s Republic.
Also, 13 Ukrainian unmanned aerial vehicles have been shot down near Slavnoe, Prechistovka, Kudryashovka, Epifanovka in Donetsk People’s Republic, Varvarovka, Borovenki in Lugansk People’s Republic, Tokmak in Zaporizhzhya Region, Petrovskoe, Suligovka in Kharkov Region, Snegirovka, Aleksandrovka and the Mogyla Kulich barrow in Kherson Region.
In addition, 1 Ukrainian Tochka-U ballistic missile have been intercepted near Kirovo in Kherson Region, and 2 Smerch rockets have been shot down near Kamenka, Kharkov Region, and Panteleimonovka, Donetsk People’s Republic.
Missile troops and artillery have hit 56 command posts, 127 firing positions of AFU artillery, as well as 273 areas of manpower and military equipment concentration.
The attacks have resulted in the elimination of more than 300 nationalists, 7 armoured vehicles, 2 Grad multiple rocket launchers, 12 field artillery guns and mortars, 24 special vehicles, 1 fuel storage facility for military equipment near Kobzartsy in Nikolaev Region, and 1 crossing of Seversky Donets River near Protopopovka.
In total, 193 Ukrainian airplanes and 130 helicopters, 1,163 unmanned aerial vehicles, 336 anti-aircraft missile systems, 3,471 tanks and other armored combat vehicles, 493 multiple launch rocket systems, 1,834 field artillery and mortars, as well as 3,512 units of special military vehicles were destroyed during the operation.

The operational update regarding the #russian_invasion on 18.00 on June 9, 2022
The one hundred sixth (106) day of the heroic resistance of the Ukrainian people to a russian military invasion continues.
In the Volyn and Polissya areas, certain units of the Armed Forces of the republic of belarus continue to perform tasks on a rotating basis to cover the section of the belarusian-Ukrainian border in the Brest and Gomel regions. In order to prevent the exposure of positions and locations of military equipment, the local population is prohibited from visiting forests.
The process of forming the so-called „people’s militia“ of the Republic of belarus has been intensified. Meetings with local residents are held at military commissariats to clarify the need for these units.
Small arms and mortar shelling continues in the Siversky direction in the border areas. The enemy conducts air reconnaissance using unmanned aerial vehicles.
In the Kharkiv oblast, the enemy continues to fire on the units of our troops in order to prevent their advance into the temporarily occupied territory.
The enemy did not take any active action in the Slovyansk direction, trying to gain a foothold on the achieved frontiers. The main focus of the enemy is to replenish stocks and regroup units. It carried out artillery shelling along the line of contact.
In the area of the settlement of Dolyna, artillery units of the Defense Forces inflicted fire damage on the concentration of enemy personnel and military equipment. The losses of the enemy are being clarified.
In the Siverodonetsk direction, the occupiers, with the support of artillery units with the support of artillery, carried out assault operations in the city of Siverodonetsk, were unsuccessful, and hostilities continued.
On the north-western outskirts of the village of Toshkivka, Ukrainian soldiers successfully repulsed an enemy assault.
The enemy has partial success in the areas of Komyshuvakha and Rota.
In the Bakhmut direction, the occupiers launched a missile strike near the city of Kramatorsk. In order to determine the routes of deployment and weaknesses in the defense of our troops, the enemy conducted reconnaissance in the area of the settlement of Nahirne. Our soldiers repulsed and forced the enemy to retreat.
The enemy conducted air reconnaissance of UAVs in the Kramatorsk and Pokrovsk districts.
The enemy did not carry out active offensive operations in the Lyman direction.
The situation has not changed in Avdiivka, Kurakhiv, Novopavliv and Zaporizhia directions.
In the South Buh area, enemy units, under cover of artillery fire and multiple rocket launchers, are building a system of defensive lines – equipping positions and setting up minefields.
In the waters of the Black and Azov Seas, enemy naval groups continue to carry out tasks to isolate the area of hostilities and blockade civilian navigation in the northwestern part of the Black Sea.
Units of the Defense Forces of Ukraine continue to inflict significant losses on enemy troops, firmly maintaining the defense in all directions. Offensive operations are underway in certain areas.