The authorities of the Kherson Region believe that the territory will most probably decide to follow in Crimea’s footsteps with respect to the idea of reunification with Russia, the deputy chief of the Kherson Region’s military-civilian administration, Kirill Stremousov, told the media on the sidelines of the 15th international festival Great Russian Word in Yalta on Tuesday.

The technical aspects of the issues of holding a referendum on the Zaporozhye region joining Russia are being worked through, the timeframe has not yet been defined, aide to a member of the chief council of the military-civilian administration of the Zaporozhye region Artem Sharlay told TASS on Tuesday.
„The technical issues are being worked out now, when to do it, how to do it. Right now this issue is being worked on because a significant part of the region where almost half of the population resides is controlled by the West, by Nazis. The residents of the city of Zaporozhye itself right now cannot vote because if they say ‚yes,‘ if they say ‚we want to join Russia,‘ they will be immediately taken to SBU’s torture chambers, people live in fear there,“ he said. 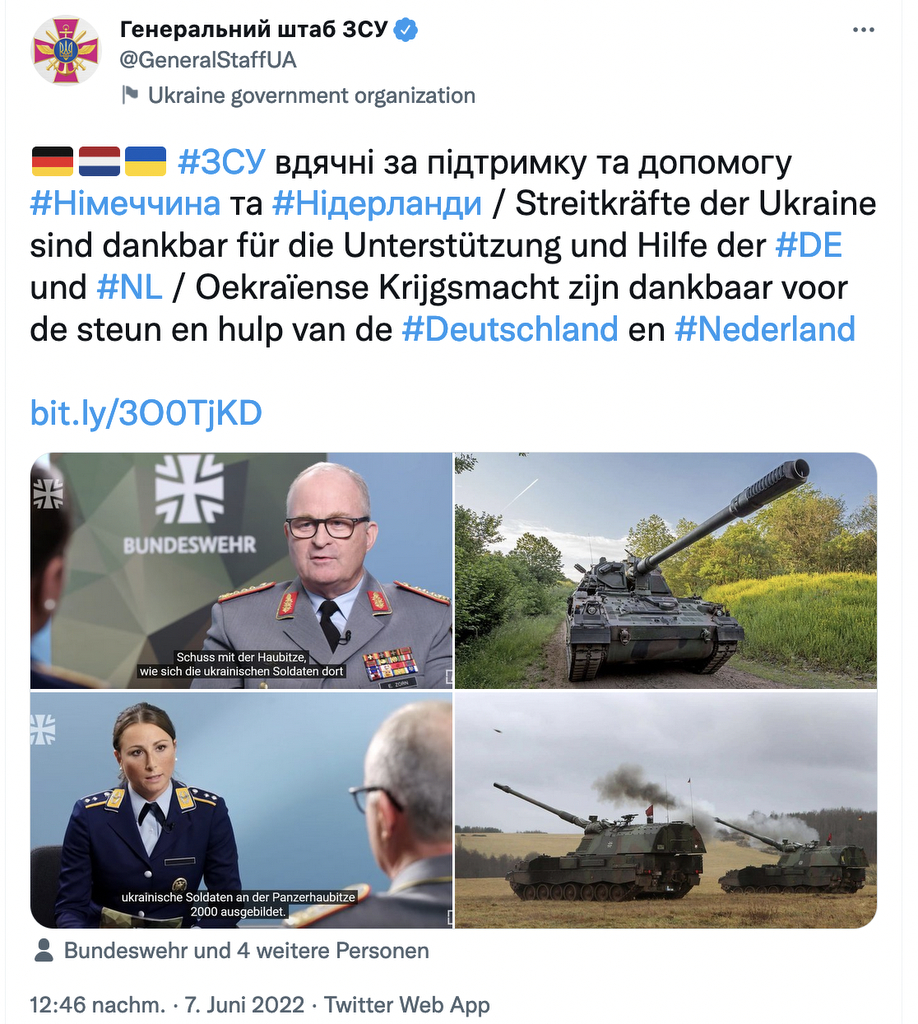 Since Russia invaded, NATO nations have upgraded Ukraine’s arsenal with increasingly sophisticated tools, with more promised, like the advanced multiple-launch rocket systems pledged by the United States and Britain.
But training soldiers how to use the equipment has become a significant and growing obstacle. (…)
“It’s like being given an iPhone 13 and only being able to make phone calls,” said Sergeant Pysanka, clearly exasperated.

But an oversight nearly delayed all maintenance on the guns at the hard-to-reach front lines, Ukrainian officers said. The entire M777 machine is put together on the imperial system used in the United States, meaning that using a Ukrainian metric wrench on it would be difficult, and would risk damaging the equipment.
Only after sending the guns did the United States arrange for a rushed shipment of toolboxes of imperial-gauge wrenches, said Maj. Vadim Baranik, the deputy commander of a maintenance unit.

Over the weekend, Ukrainian forces have recaptured parts of Sieverodonetsk although Russian forces likely continue to occupy eastern districts. Russia’s broader plan likely continues to be to cut off the Sieverodonetsk area from both the north and the south.
Russia made gains on the southern, Popasna axis through May but its progress in the area has stalled over the last week. Reports of heavy shelling near Izium suggests Russia is preparing to make a renewed effort on the northern axis.
Russia will almost certainly need to achieve a breakthrough on at least one of these axes to translate tactical gains to operational level success and progress towards its political objective of controlling all of Donetsk Oblast. 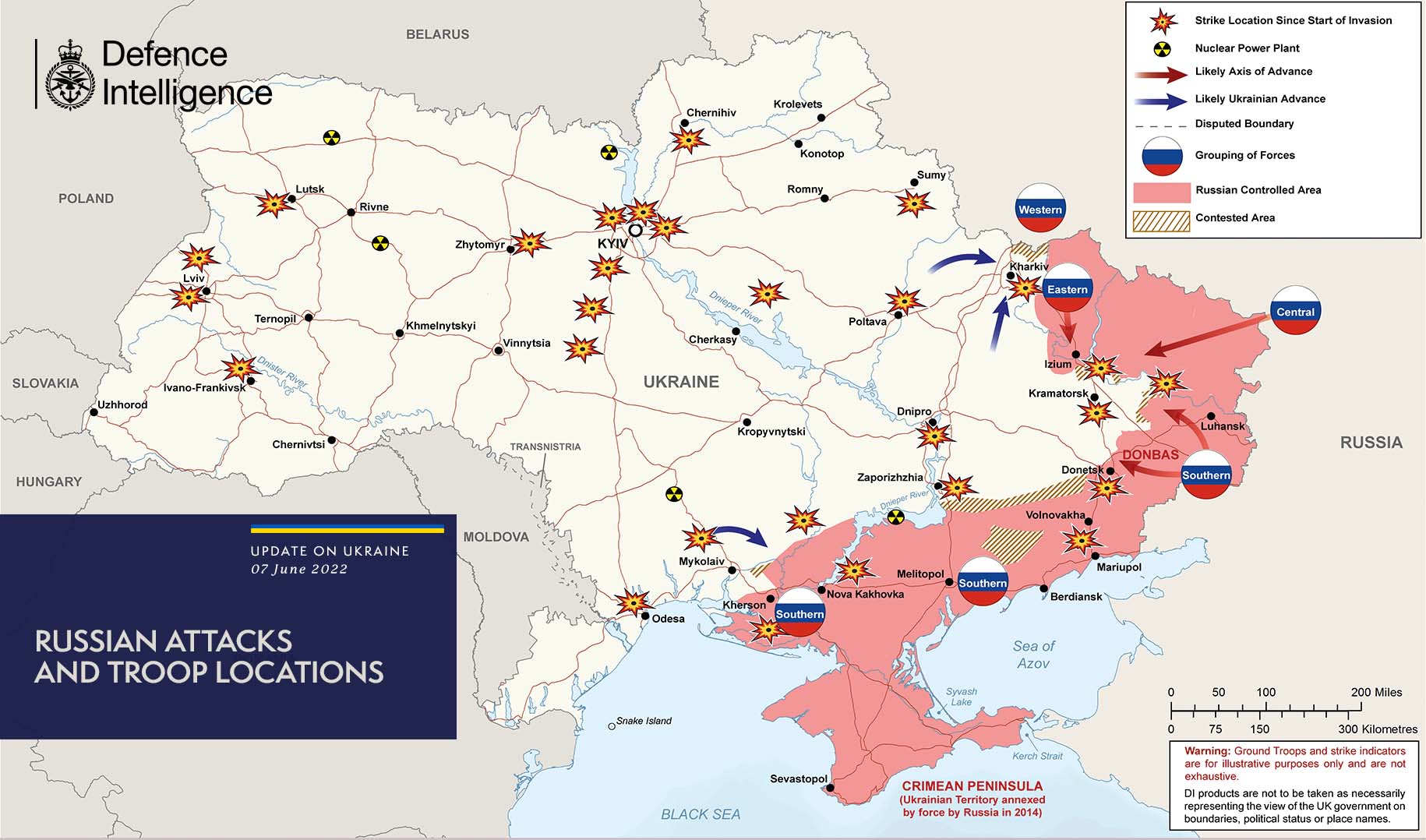 The operational update regarding the #russian_invasion on 06.00 on June 7, 2022.
The one hundred fourth (104) day of the heroic resistance of the Ukrainian people to a russian military invasion continues.
The threat of missile and air strikes from the territory of belarus remains in the Volyn and Polissya directions. As part of the creation of the Southern Operational Command, it is planned to increase the number of armed forces of the republic of belarus to 80 thousand people. It is planned to equip military units with equipment and weapons at the expense of technical means in storage.
In the Siversky direction, the enemy did not take active action, no signs of the formation of strike groups were found. In order to demonstrate the presence and restraint of the Defense Forces, it continues to maintain up to three battalion tactical groups in the border areas of Bryansk and Kursk oblasts. Mortar shelling of units of our troops in the areas of the settlements of Khodyne and Velyka Pisarivka in the Sumy region was carried out from the territory of the russian federation.
In the Kharkiv direction, the enemy’s main efforts are focused on maintaining the occupied borders, border areas north of Kharkiv and restraining the advance of our troops. Conducts remote mining of the area in the direction of the offensive of our troops on Rubizhne.
In the Slavic direction, the enemy is concentrating its main efforts on continuing the offensive in the areas of Izyum and Slovyansk. It is trying to move in the direction of Dovhenke and Dolyna.
The enemy is shelling the positions of our troops in the areas of the settlements of Bazalivka, Brazhkivka, and Hrushuvakha. In order to clarify the position of our units and adjust the artillery fire, it conducts air reconnaissance with the use of UAVs.
In the Donetsk direction, in addition to artillery shelling, the enemy fired from planes and helicopters. The aggressor’s main efforts were focused on the Siverodonetsk and Bakhmut areas.
The enemy did not wage active hostilities in the Lyman direction. It fired a missile at the village of Mykolayivka, 4 km east of Slovyansk.
The enemy continues to storm the city of Siverodonetsk, fighting continues. Our soldiers inflict losses on the enemy.
In the Bakhmut direction, Ukrainian troops successfully countered and repulsed the enemy’s offensive in the directions of the settlements of Nahirne, Berestov, Krynychne, and Rota.
In order to strengthen the group in the directions of Popasna, Mykolayivka, the enemy is redeploying units.
The enemy did not wage active hostilities in the Avdiivka, Kurakhiv, Novopavliv, and Zaporizhzhia areas.
In the South Bug direction, the enemy is concentrating its main efforts on improving its tactical position, maintaining the occupied frontiers, replenishing ammunition and fuel and oils. Ukrainian helicopters struck at clusters of enemy forces in the Kherson region, and planes – at ammunition depots in the Mykolayiv ovlast. The enemy lost more than 20 people and up to 10 units of military equipment.
In order to restore the lost position, the enemy, with the support of artillery and army aircraft, carried out offensive operations in the direction of Lozove – Bila Krynytsia, had no success. To clarify the positions of our troops, the enemy conducted air reconnaissance of UAVs.
Three carriers of naval-based cruise missiles of the Caliber type are ready for the use of missile weapons in the Black Sea.
Over the past day, the defender of Ukraine in the Donetsk and Luhansk areas repulsed ten enemy attacks, destroyed one tank, three artillery systems, two armored combat vehicles, one car and two ammunition depots. Air defense units shot down two Orlan-10 unmanned aerial vehicles.

The operational update regarding the #russian_invasion on 18.00 on June 7, 2022.
The one hundred fourth (104) day of the heroic resistance of the Ukrainian people to a russian military invasion continues.
The aggressor continues to launch missile and air strikes on military and civilian infrastructure on the territory of Ukraine and does not stop trying to establish control over the city of Siverodonetsk.
In the Volyn and Polissya directions without much change.
In the Siversky direction, the enemy did not take active action. During the day, the enemy fired on the settlements of Senkivka, Chernihiv oblast, Sopych, Konstantynivka, Stari Vyrky and Velyka Pysarivka, Sumy oblast.
In the Kharkiv direction, the enemy is fighting to hold the occupied borders, continues to shell our troops, passes the area.
In the Slovyansk direction, the enemy focuses on preparing troops for the attack on the city of Slovyansk. It fired on the settlements of Velyka Komyshuvakha, Dolyna, Kurulka, Hrushuvakha, Chervona Polyana and Shnurky.
In the Siverodonetsk direction, the enemy fired on units of our troops and civilian infrastructure with barrel and jet artillery in the areas of the settlements of Lysychansk, Borivske and Metelkino.
In the Bakhmut direction, Ukrainian soldiers successfully restrained assault operations in the area of ​​the settlement of Komyshuvakha. Also, hostile assault attempts in the direction of Svitlodarsk and Uglehirska Three thermal power plant were unsuccessful.
Near Nahirny, our defenders inflicted fire damage on the occupying forces. After an unsuccessful assault attempt, the enemy retreated to its former position.
The occupiers did not conduct active hostilities in the Avdiivka, Kurakhiv, Novopavliv and Zaporizhzhya areas.
In the South Buh direction, the enemy focused its main efforts on conducting reconnaissance, maintaining the occupied frontiers, and restoring lost positions. In addition, enemy units, using artillery fire, are trying to prevent the creation of favorable conditions for a counteroffensive by our troops in the Kherson and Mykolaiv oblasts.
There have been no significant changes in the Bessarabian direction.
In the Black and Azov Seas, an enemy naval group is involved in blocking civilian navigation in the northwestern part of the Black Sea.
Due to the successful actions of our air defense, the intensity of the use of enemy aircraft has been reduced. Efforts are focused on supporting the actions of the ground group and targeting missile strikes on infrastructure in the depths of Ukraine.
Due to the loss of personnel and military equipment, the enemy continues to actively use civilian infrastructure and repair and rehabilitation base in Luhansk and Donetsk oblasts.

WASHINGTON, June 26 (Reuters) - The United States is likely to announce this week the purchase of an advanced medium to long range surface-to-air missile defense system for Ukraine, a source familiar with the matter told Reuters on Sunday.