Russia’s operational main effort remains the assault against the Sieverodonetsk pocket in the Donbas and its Western Group of forces have likely made small advances in the Kharkiv sector for the first time in several weeks.
On 10 June, the First Deputy Chairman of Russia’s Military Industrial Commission predicted that state defence spending will increase by 600-700 billion roubles (GBP 8.5 -10 billion), which could approach a 20% increase in Russia’s defence budget.
Russian government funding is allowing the country’s defence industrial base to be slowly mobilised to meet demands placed on it by the war in Ukraine.
However, the industry could struggle to meet many of these requirements, partially due to the effects of sanctions and lack of expertise.
Russia’s production of high-quality optics and advanced electronics likely remain troubled and could undermine its efforts to replace equipment lost in Ukraine.

The operational update regarding the #russian_invasion on 06.00 on June 14, 2022
he one hundred eleventh (111) day of the heroic resistance of the Ukrainian people to a russian military invasion continues.
russian enemy does not stop conducting offensive operations in the Eastern Operational Zone and launching missile and air strikes on infrastructure facilities in Ukraine.
In the Volyn and Polissya areas, no significant changes in the activities of units of the Armed Forces of the republic of belarus were observed.
In the northern direction, the enemy reinforced units of the 1st Tank Army of the Western Military District, which is involved in covering the russian-Ukrainian border in the Bryansk and Kursk regions, with two battalion tactical groups of airborne troops. russian aggressor fired artillery at the positions of the Defense Forces in the border areas of Sumy and Chernihiv oblasts. Conducted air reconnaissance of UAVs in the area of the settlement of Seredyna Buda, Sumy oblast.
In the Kharkiv direction, russian enemy’s main efforts are focused on conducting positional defense and preventing further advance of units of the Defense Forces to the State Border. The invaders fired, including army aircraft, in the areas of the settlements of Rubizhne, Ruska Lozova, Bayrak and Dementiyivka.
In the Slovyansk direction, russian occupiers are focusing their efforts on establishing full control over the settlement of Bohorodychne and creating conditions for the development of the offensive on Slovyansk. The enemy used artillery near Dibrivne, Karnaukhivka, Nova Dmytrivka and Vernopil.
In the Lyman direction, russian occupiers are regrouping troops in order to develop an offensive in the directions Lyman – Raihorodok and Yampil – Siversk.
In the Siverodonetsk direction, russian enemy strengthened the group by moving to the area of settlements Kreminna – Rubizhne up to two battalion tactical groups. With the support of artillery, it carried out assault operations in the city of Siverodonetsk, trying to gain a foothold in the central part of the city.
In the Bakhmut direction, russian aggressor fired artillery at the positions of our troops in the areas of the settlements of the Vidrodzhennia, Novoluhansk and Bakhmut. Has partial success, is fixed in the settlement of the Vidrodzhennia. Continues to carry out assault operations in the direction of the Vidrodzjennia – Vershyna.
In the Avdiivka, Kurakhivka, Novopavlivka and Zaporizhzhia directions, russian enemy did not take active action. Increased the use of aircraft and artillery to bind our troops.
In the South Buh area, the occupiers are concentrating their main efforts on maintaining the occupied borders and preventing our troops from conducting counter-offensive operations.
In the Kryvyi Rih direction, the enemy mined the coast of the Inhulets River along the Davydiv Brid-Kalynivske border.
In the Mykolayiv direction, in the areas of the settlements of Stanislav, Tomyna Balka, and Doslidne in the Kherson oblast, the enemy deployed up to two jet batteries and one barrel artillery battery.
Five Caliber naval-based cruise missiles are ready to be used in missiles in the Black Sea.
The enemy continues to suffer losses in manpower and equipment. In order to solve the problem of restoring damaged weapons and equipment, there are about 30 mobile brigades in Belhorod, Voronezh, Rostov regions, as well as in the temporarily occupied territory of the Autonomous Republic of Crimea. 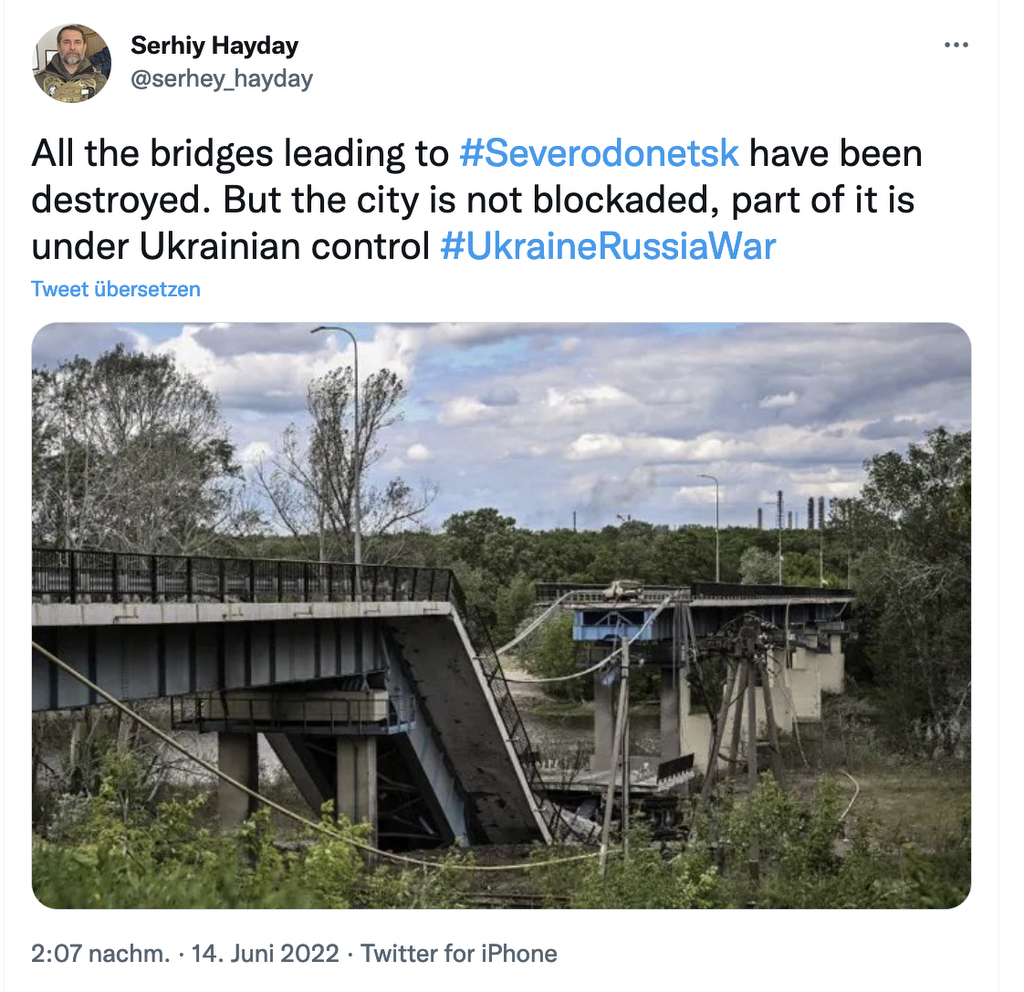 High-precision long-range Kalibr missiles near Priluki, Chernigov region, have destroyed AFU arsenal of artillery weapons and ammunition.
In addition, high-precision air-based missiles have hit 11 areas of concentration of Ukrainian manpower and military equipment, 8 firing positions of AFU artillery units, including 3 platoons of Grad multiple-launch rocket systems near Bakhmut and Pereezdnoe in Donetsk People’s Republic, Lisichansk in Lugansk People’s Republic, and 2 ammunition depots on the southern outskirts of Kharkov and near Gorskoe in Lugansk People’s Republic.
Operational-tactical and army aviation have hit 101 areas of AFU manpower and military equipment concentration.
The attacks have resulted in the elimination of more than 350 nationalists, 3 command posts, 13 tanks and other armored fighting vehicles, 6 Grad multiple rocket launchers, 14 field artillery mounts and 22 special vehicles have been destroyed.
Russian air defense means have shot down 1 MiG-29 aircraft of Ukrainian Air Force near Slavyansk in Donetsk People’s Republic and 1 Mi-24 helicopter near Snegirevka in Nikolaev region.
9 Ukrainian unmanned aerial vehicles have been shot down nnear Chervonaya Gusarovka, Bolshie Prokhody, Malaya Kamyshevakha in Kharkov region, Apostolovo in Dnepropetrovsk region, Donetsk, Levkovka, and Yakovlevka in Donetsk People’s Republic.
In addition, 1 Ukrainian Tochka-U ballistic missile near Vernopol’e, Kharkov region, and 14 Smerch rockets near Donetsk, Aleksandrovka, Donetsk People’s Republic, Popasnaya, Lugansk People’s Republic, and Sukhaya Kamenka, Kharkov region, have been intercepted.
Missile troops and artillery have hit 280 areas of AFU concentration of manpower and military equipment, 18 command posts, 59 firing positions of artillery and mortar units, as well as 1 fuel depot near Konstantinovka in Donetsk People’s Republic.
In total, 202 Ukrainian airplanes and 131 helicopters, 1,205 unmanned aerial vehicles, 338 anti-aircraft missile systems, 3,548 tanks and other armored combat vehicles, 521 multiple launch rocket systems, 1,947 field artillery and mortars, as well as 3,605 units of special military vehicles were destroyed during the operation.
***
The Ukrainian army continues to suffer significant losses during the special military operation.
I would like to note that in recent weeks, incidents involving the shooting of Ukrainian servicemen in the back by nationalist units have become more frequent in areas of military operations. Thus, after a fire preparation for an attack by Russian troops near Novomikhailovka in Donetsk People’s Republic, more than 30 servicemen of the 25th Battalion of the 54th Mechanized Brigade of AFU decided to lay down their arms and surrender.
Ukrainian servicemen occupying a stronghold near Zvioroferma asked the Russian unit command via radio to cease fire and provide a corridor for exit.
Around 10 p.m., AFU servicemen with white flags began moving towards Russian positions.
At that moment, Ukrainian nationalist barrier unit arrived at the stronghold in armored vehicles and opened crossfire in the back on the servicemen of the 54th Brigade of the Ukrainian Armed Forces. As a result of this shooting, 32 Ukrainian servicemen were fatally wounded and killed.
This incident, as well as many others like it, clearly demonstrates that amid growing military failures and demoralization of Ukrainian troops, the Kiev nationalist regime is trying to stop the retreat and surrender of its units by punitive actions of barrier squads.
The lives of Ukrainian servicemen and mobilized fighters of territorial defence units mean nothing to the current leadership of Ukraine.

The operational update regarding the #russian_invasion on 18.00 on June 14, 2022
The one hundred eleventh (111) day of the heroic resistance of the Ukrainian people to a russian military invasion continues.
russian aggressor continues to launch missile and air strikes on military and civilian infrastructure in Ukraine.
In the Volyn and Polissya directions, there is no active action was taken by the enemy. As part of the check of combat readiness of the armed forces of the republic of belarus, exercises were conducted with units of special operations forces.
In the Siversky direction, russian enemy continues mortar shelling of settlements in border areas, including civilian infrastructure in the area of the settlement of Mykhalchyna Sloboda, Chernihiv oblast.
In the Kharkiv direction, russian enemy focused its main efforts on maintaining the occupied frontiers. To restrain the actions of units of the Defense Forces, it carries out systematic fire on the positions of our troops. In addition,russian occupiers fired on civilian infrastructure in the settlements of Dementiyivka, Ruska Lozova, Mospanove and Bazalivka. The enemy remotely mined the area in the areas of Bayrak, Peremoha and Shestakovo. Conducts assault operations near Rubizhne, fighting continues.
Systematic russian enemy artillery shelling was recorded in the Slovyansk direction in the areas of the settlements of Tetyanivka, Chepil, Dolyna, Dibrivne and Bohorodychne.
russian enemy did not take any active action in the Lyman direction. It fired artillery at civilian infrastructure in the Siversk area.
In the Siverodonetsk direction, russian invaders fired on civilian infrastructure in the settlements of Siverodonetsk, Lysychansk, Bila Hora, Ustynivka, Toshkivka and others. Helicopter strikes near Metelkino.
russian enemy is conducting assaults in the city of Siverodonetsk, fighting continues. The enemy is regrouping troops and trying to strengthen the group.
In the Bakhmut direction, the occupiers fired at our troops with mortars, barrel and jet artillery in the areas of Mykolayivka, Berestove, Vrubivka, Pokrovske and New York. Enemy army aircraft launched an air strike near Belogorovka.
In the Berestove area, Ukrainian soldiers repulsed an enemy assault, inflicted losses on the enemy and forced them to retreat to their former positions. The enemy is conducting assault operations in the area of the settlement of Zolote, the fighting continues.
The aggressor did not conduct active hostilities in the Avdiivka, Kurakhiv, Novopavliv and Zaporizhia directions. It fired on civilian infrastructure near Avdiivka, Marinka and Huliaipole. It struck with assault and army aircraft in the areas of Sribne and Mali Shcherbaki. It conducted reconnaissance in battle near Pavlivka.
In the South Buh direction, russian enemy fired on units of our troops and tried to fight the counter-battery.
In the areas of Trudolyubivka, Tokareve, Bashtanka, Kvitneve, Luch, Tavriyske, and Oleksandrivka, russian occupiers fired at the infrastructure with artillery, mortars, and multiple rocket launchers.
The enemy conducts reconnaissance in this direction using UAVs. Remotely mined some parts of the river Inhulets. Continues engineering equipment positions.
The situation in the Bessarabian direction has not changed significantly.