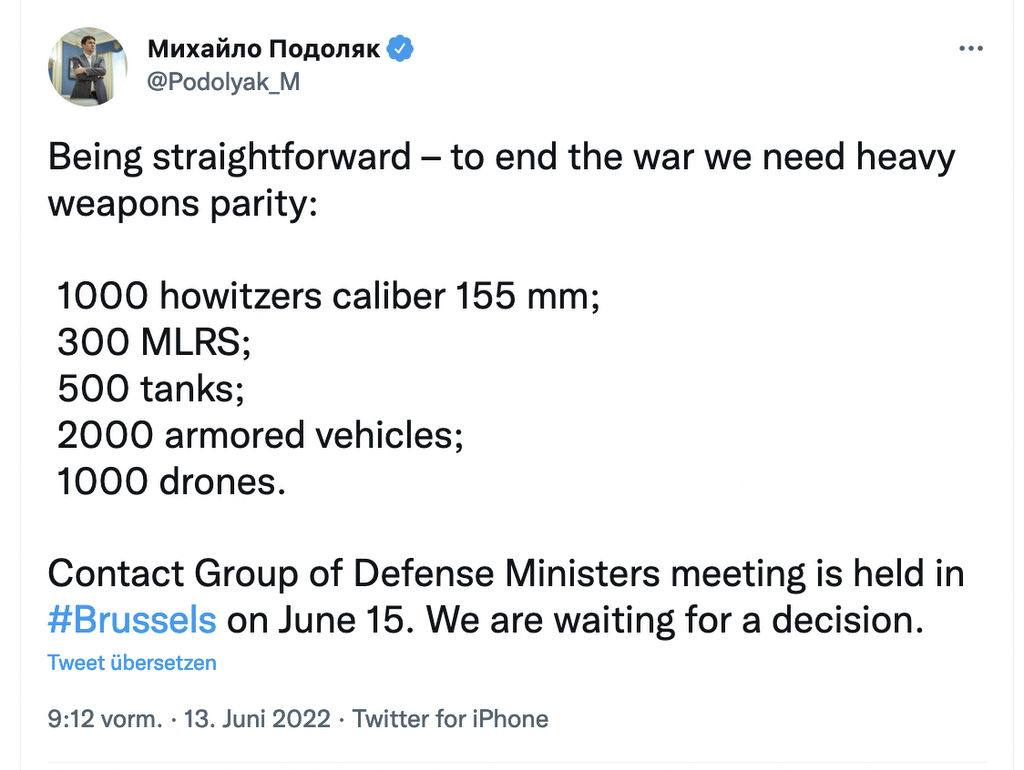 Over the weekend, the battle around Sieverodonetsk has continued to rage. Over the coming months, river crossing operations are likely to be amongst the most important determining factors in the course of the war.
The key, 90km long central sector of Russia’s frontline in the Donbas lies to the west of the Siverskyy Donets River.
To achieve success in the current operational phase of its Donbas offensive, Russia is either going to have to complete ambitious flanking actions, or conduct assault river crossings.
Ukrainian forces have often managed to demolish bridges before they withdraw, while Russia has struggled to put in place the complex coordination necessary to conduct successful, large scale river crossings under fire.

The operational update regarding the #russian_invasion on 06.00 on June 13, 2022
The one hundred tenth (110) day of the heroic resistance of the Ukrainian people to a russian military invasion continues.
In the Volyn, Polissya and Siversky directions there are without significant changes. In the Siversky direction, russian occupiers fired artillery and mortars at the positions of the Defense Forces in the area of Hrinivka, Chernihiv oblast.
In the Kharkiv direction, russian enemy units continue to focus their main efforts on conducting positional defense and preventing the further advance of our troops to the State Border of Ukraine. russian enemy carried out assault operations in the direction of Ternov – Izbytske, had partial success, established itself on its northern outskirts. He remotely mined possible routes of deployment of our units in the area of the settlement of Petrivka, 20 km east of Stary Saltiv. Conducted air reconnaissance of UAVs in the Shestakovo area.
In the Slovyansk direction, enemy units focused their efforts on storming the settlements of Dolyna and Bohorodychne, but were unsuccessful. The enemy, as part of the logistics of troops, replaced more than 100 units of damaged armored vehicles.
In the Donetsk direction, the occupying forces are focusing on offensive operations to encircle our troops in the areas of Siverodonetsk and Lysychansk, and to block logistics routes from Bakhmut. Continues measures to replenish losses. It moved more than 80 weapons and military equipment, including heavy armored vehicles and artillery systems, to the settlements of Kreminna and Starobilsk.
In the Lyman direction, the enemy did not conduct active hostilities, continued shelling the positions of our troops in the areas of the settlements of Mayaky, 10 km north of Slovyansk, and Serebryanka, 5 km northeast of Siversk.
In the Siverodonetsk direction, the enemy, with the support of artillery, carried out assault operations in the city of Siverodonetsk, had partial success, pushed our units away from the city center, and hostilities continue. It fired artillery at the positions of the Defense Forces in the areas of the settlements of Lysychansk, Siverodonetsk, and Toshkivka.
In the Bakhmut direction, our soldiers successfully repulsed the assault operations in the directions of Viktorivka – Vrubivka and Komyshuvakha – Vrubivka. The enemy resumed offensive operations near the village of Zolote. It is fixed on the border of the Roty – Myronivka. To improve the tactical position and capture the dominant heights unsuccessfully conducted assault operations in the directions Dolomitne – Kodema, Dolomitne – Novoluhansk. Conducted air reconnaissance of UAVs in the Pokrovsk area.
In the Kurakhiv direction, russian enemy launched an air strike on the positions of our troops in the Krasnohorivka area, 15 km east of Kurakhove.
In the Avdiivka, Novopavlivska and Zaporizhzhia directions, the enemy fired along the line of contact in order to prevent the transfer of reserves to other directions.
In the South Buh direction, the enemy is conducting a positional defense. The main efforts are directed at the maintenance of previously occupied territories. He carried out engineering equipment of positions in the areas of Shilova Balka and Prydniprovske settlements. In order to clarify the position of our troops, he conducted air reconnaissance of UAVs in the area of Davydiv Brid.
russian aggressor is blocking civilian shipping in the northwestern part of the Black Sea. Six Caliber naval-based cruise missile carriers are ready to use missile weapons in the Black Sea.

​The operational update regarding the #russian_invasion on 18.00 on June 13, 2022
The one hundred tenth (110) day of the heroic resistance of the Ukrainian people to a russian military invasion continues.
In the Volyn and Polissya directions there is without much change.
In the Siversky direction, russian enemy fired mortars and grenade launchers at the settlements of Zapsillya in the Sumy oblast and Hirsk and Gremyach in the Chernihiv oblast. Units of the aggressor continue engineering equipment of defensive positions in border areas in the specified direction.
In the Slobozhansky direction, the enemy systematically fires on the positions of units of the Defense Forces, improves the engineering equipment of its own defense facilities and conducts air reconnaissance.
In the Kharkiv direction, the enemy’s main efforts are focused on trying to disrupt the logistical routes of supplying a group of our troops operating in the Slovyansk direction.
In the Slovyansk direction, the enemy made an attempt to carry out assault operations in Bogorodichne, was unsuccessful, withdrew, and established itself in the north-western part of the settlement.
In the Donetsk direction, the occupiers are regrouping units and strengthening groups, trying to surround the units of our troops in the area of settlements Lysychansk, Privillya, Severodonetsk, Borivske.
The enemy did not take active action in the Lyman direction.
In the Siverodonetsk direction, the enemy carried out assaults in order to establish full control over the city of Siverodonetsk, carried out an offensive on the positions of our troops in the area of Metolkino, had no success.
In the Bakhmut direction, the enemy continued shelling the positions of our troops with artillery and rocket-propelled grenade launchers. Using the results of the fire, it fought in the areas of Toshkivka – Ustynivka, Orikhove – Zolote, Komyshuvakha – Vrubivka, Vasylivka – Bilohorivka, Nyrkove – Mykolayivka, Dolomitne – Novoluhanske, and had no success.
The aggressor did not take active action in the Avdiivka, Kurakhiv, Novopavliv and Zaporizhzhia areas. In order to restrain and prevent the transfer of our troops to other areas, it carried out shelling with mortars, artillery and jet artillery.
In the South Buh direction, the enemy continues to defend. The main efforts are focused on conducting reconnaissance, counter-battery combat, increasing the combat capabilities of reserve formations and the air defense system in the direction, engineering equipment of defense lines and positions.
The enemy continues to strengthen the group of troops operating in the Kryvyi Rih direction.
The situation in the Bessarabian direction has not changed significantly.
The enemy has significant problems with the recruitment of units carrying out assault operations in the Donetsk and Luhansk regions.