Russia hopes to rectify issues that have previously constrained its invasion by geographically concentrating combat power, shortening supply lines and simplifying command and control.
Russia still faces considerable challenges. It has been forced to merge and redeploy depleted and disparate units from the failed advances in north-east Ukraine. Many of these units are likely suffering from weakened morale.
Shortcomings in Russian tactical coordination remain. A lack of unit-level skills and inconsistent air support have left Russia unable to fully leverage its combat mass, despite localised improvements. 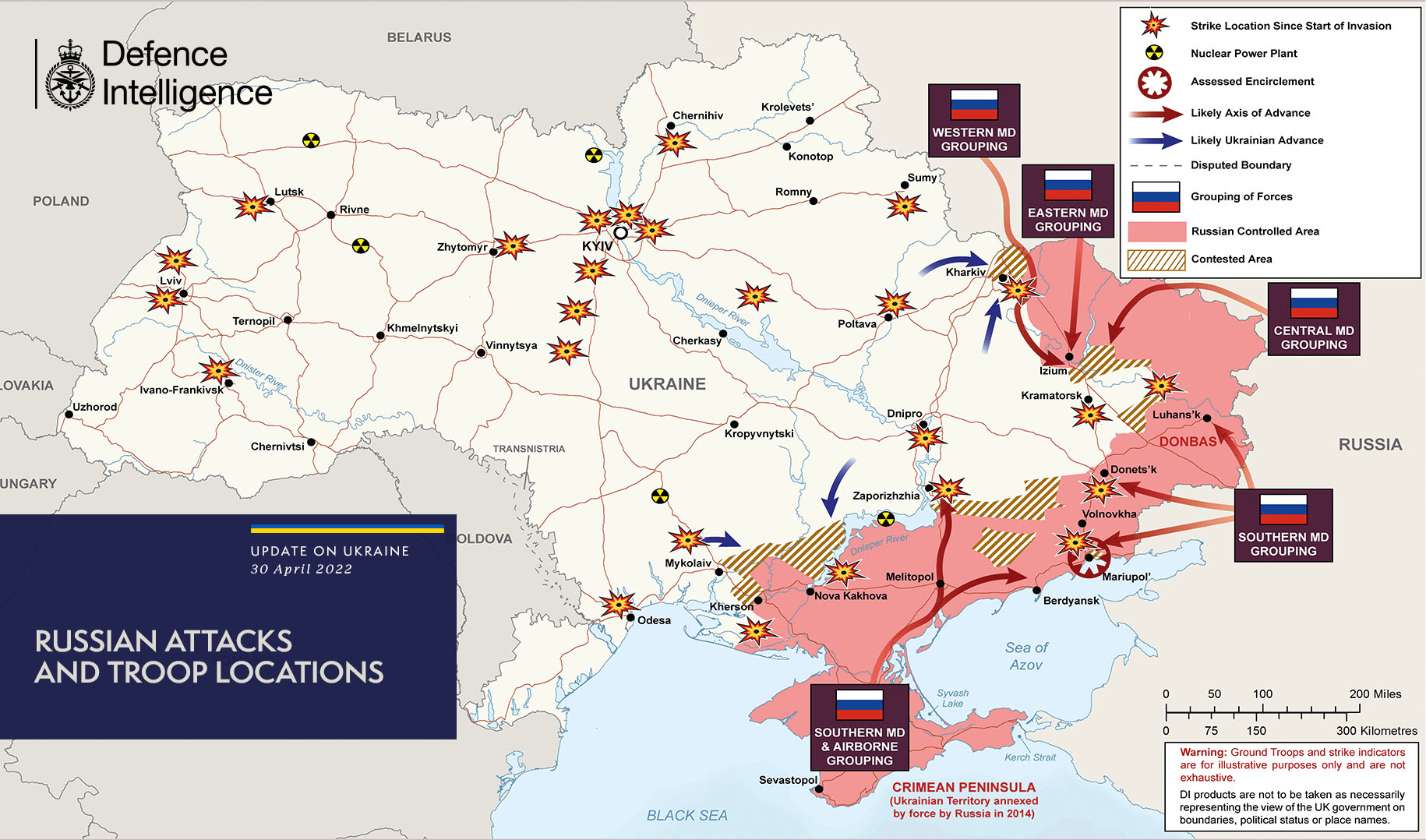 The sixty-sixth day of the heroic resistance of the Ukrainian people to a russian military invasion continues. A russian federation continues its full-scale armed aggression against Ukraine.
russian enemy continues to carry out offensive operations in the Eastern Operational Zone in order to defeat the Joint Forces, establish full control over the territory of Donetsk and Luhansk oblasts and maintain the land route with the occupied Crimea.
russian enemy launches air and missile strikes and launches artillery shelling of civilian and military infrastructure in the depths of Ukraine, the positions of our troops along the line of contact and in the border areas. It is regrouping and strengthening of occupying forces continues.
In the Volyn and Polissya directions, russian enemy did not take active action. There have been no significant changes in the situation in these areas.
In the Siversky direction, russian enemy units fired on the positions of our troops in the areas of the settlements of Kindrativka, Katerynivka, Svarkove, and Bilokopytove.
In the Slobozhansky direction, russian enemy is concentrating its main efforts on maintaining its occupied positions and inflicting fire damage on units of the Armed Forces of Ukraine. In order to strengthen the group, russian enemy is moving individual units from the Eastern Military District from the territory of the Belgorod region to the area of ​​the city of Izyum.
russian units tried to launch an offensive in the direction of the settlements of Sulyhivka and Dovhenke, but were unsuccessful. In order to cover the groups of its troops in the Kharkiv and Izyum directions, russian enemy is trying to deploy forces and means of air defense.
In the Eastern Operational Zone, russian enemy continues to advance on the Lyman (in the areas of Yampil, Ozerne, Lyman), Severodonetsk, where it is trying to complete the capture of Rubizhne, Popasna (in the direction of Kalinovo and Popasna) and Kurakhiv (Olenivka and Novomykhailivka) directions. There is no success, the fighting continues.
Artillery shelling of units of Ukrainian troops does not stop in the Zaporizhzhia direction.
In the South Buh direction, russian enemy did not conduct active offensive operations. Isolated attacks on the positions of units of Ukrainian troops are recorded.
In the Bessarabian direction there is without significant changes.
In the Mykolayiv direction, russian enemy intensified air reconnaissance in the operational depth of the defensive positions of the Armed Forces of Ukraine, presumably in order to expose the presence and nature of the actions of the reserves.
During the previous day, the air defense units of the Air Force and the Land Forces hit ten air targets: one plane and nine UAVs of the Orlan-10 operational and tactical level.
Fourteen enemy attacks were repulsed in Donetsk and Luhansk oblasts over the past 24 hours, eleven tanks, seven artillery systems, twenty-eight armoured vehicles and fourteen vehicles were destroyed.

High-precision air-based missiles of the Russian Aerospace Forces have hit 5 Ukrainian military assets. Among them: 4 ammunition and fuel depots near Berezovoe, Vozdvizhenka, Pokrovskoe and Barvenkovo, as well as area of concentration of the nationalists‘ manpower and military equipment.
Operational-tactical and army aviation of the Russian Aerospace Forces have hit 9 areas of Ukrainian manpower and military equipment concentration overnight. Up to 120 nationalists, 4 tanks and 6 armoured vehicles were destroyed.
Missile troops have hit 4 Ukrainian military facilities during the night: 2 command posts of AFU units, 1 battery of multiple rocket launchers and 1 radar station.
Artillery units have carried out 389 firing missions during the night. Among them: 35 command posts, 41 strong points, 169 areas of manpower and military equipment concentration, 33 artillery positions, and 15 missile-artillery weapons and ammunition depots.
Russian air defence means have shot down 18 Ukrainian unmanned aerial vehicles, including 3 Bayraktar TB-2s, over Gorlovka, Chervonyi Oskol, Krasnogovka, Petmanovo, Kramatorsk, Kozinka, Karpovka, Putilino, Novoakhtyrka, Bezlikyi Liman and Peremoga.
Also during the night, 2 rockets of Ukrainian Smerch multiple-launch rocket systems were shot down over Gorlovka in the Donetsk People’s Republic and Snezhkovka in Kharkov Region.
In total, 142 aircraft and 112 helicopters, 658 unmanned aerial vehicles, 279 anti-aircraft missile systems, 2,656 tanks and other armored combat vehicles, 307 multiple launch rocket systems, 1,189 field artillery and mortars, as well as 2,492 units of special military vehicles of the Armed Forces of Ukraine were destroyed during the operation.

The sixty-sixth day of the heroic resistance of the Ukrainian people to a russian military invasion continues.
russian enemy continues to conduct full-scale armed aggression against Ukraine and offensive operations in the Eastern Operational Zone.
In the Slobozhansky direction, a group of russian enemy troops continues to launch air strikes and artillery shelling on the city of Kharkiv.
In the Izium direction, russian occupiers, with the help of independent units of the 1st Tank Army and the 20th Combined Arms Army of the Western Military District, the 35th Combined Arms Army and the 68th Army Corps of the Eastern Military District, and airborne troops are trying to advance in the direction Izium – Barvinkove and Izium – Slovyansk.
russian enemy continues to concentrate forces and resources both in the temporarily occupied territories of the Kharkiv oblast and in the Belgorod region, in the immediate vicinity of the state border of Ukraine. Thus, the occupiers moved units of the 55th Independent Motorized Rifle Brigade of the 41st Combined Arms Army of the Central Military District to the Volokhiv Yar settlement, and units of the 5th Independent Tank Brigade of the 36th Combined Arms Army of the Eastern Military District to Izyum.
russian enemy is increasing the air defense system, conducting air reconnaissance of the positions of units of the Armed Forces of Ukraine with the use of UAVs in the settlements of Velyka Komyshuvakha, Ivanivka, Chervone, Kurulka, Dovhenke, Nova Dmytrivka and Barvinkove.
russian occupation forces continue to carry out illegal actions in the occupied territories of Kharkiv region. According to available information, russian enemy is forcibly deporting the population to the territory of the russian federation. russian occupiers are spreading misinformation about the capture of Kharkiv, Kyiv and Zaporizhzhia.
In the Donetsk direction, russian enemy is conducting active hostilities along almost the entire line of contact. Air strikes and artillery shelling of Ukrainian defenders‘ positions continue.
The main efforts of the enemy are focused on offensive operations in the Lyman, Severodonetsk, Popasna and Kurakhiv areas in order to take full control of the settlements of Rubizhne, Popasna and, probably, further attack on the Lyman, Slovyansk and Barvinkove.
In the Mariupol direction, russian enemy continued to launch air strikes on the city of Mariupol. The main efforts are focused on blocking units of the Defence Forces in the area of ​​the Azovstal plant.
In the Zaporizhzhia direction, russian enemy regrouped and increased artillery units in order to continue the offensive.
In the Tavriya direction, russian enemy continues to demonstrative actions in order to prevent the transfer of units of Ukrainian troops to other areas, replenishes stocks of ammunition and fuel and lubricants.
In the South Buh direction, russian occupiers forces of the 8th and 49th Combined Arms Armies, the 22nd Army Corps, the coastal units of the Black Sea Fleet of the Southern Military District and airborne troops are fighting to improve their tactical position. The enemy continues to regroup units, take measures to replenish supplies.
Preparatory measures of the enemy to carry out the offensive and reach the administrative border of the Kherson region are underway.
In the Mykolayiv direction russian enemy continues attempts of fire destruction of positions of our troops.
In the Bessarabian direction, russian occupiers are spreading misinformation about the threat to the population of the transnistrian region of the Republic of Moldova from Ukraine.
In the Volyn and Polissya directions, units of the Armed Forces of the republic of belarus continue to perform tasks to strengthen the section of the Ukrainian-belarusian border in the Brest and Gomel regions.
It is possible that russian enemy will provoke in the border areas.
russian enemy remains in danger of launching missile and bomb strikes on military and civilian infrastructure in Ukraine. According to the available information, the russian mobile short range ballistic missile systems Iskander-M are still deployed in the territory of the republic of belarus, and some aviation units of the russian Air Force continue to be based at certain airfields.
In the Siversky direction, russian enemy continues artillery shelling of units of our troops and infrastructure in the border areas of Ukraine with the russian federation.
russian occupiers are launching missile and bomb attacks and carrying out artillery shelling of civilian infrastructure and residential areas in the settlements of Zaporizhzhia, Dnipropetrovsk, Donetsk, Luhansk and Kharkiv oblasts.
russian enemy also continues to illegally detain Ukrainian citizens and tortures and torments them.
As a result of the offensive of the Ukrainian Defence Forces in the Kharkiv oblast, control over the settlements of Verkhnya Rohanka, Ruska Lozova, Slobidske and Prilesne was restored.

High-precision air-based missiles of the Russian Aerospace Forces have hit 17 Ukrainian military assets during the day. Among them: 8 areas of manpower and equipment concentration, 5 artillery and multiple rocket launcher firing positions, and 2 strong points.
Also destroyed: 1 command post and 1 missile and artillery weapons depot near Pokrovskoe, Dnepropetrovsk Region.
During the day, operational and tactical aviation of the Russian Aerospace Forces have hit 2 command posts, 9 strong points and areas of manpower and equipment concentration, as well as 5 ammunition and fuel depots.
The attacks have resulted in the elimination over 200 nationalists and 23 armoured vehicles.
Missile troops and artillery have hit 319 areas of manpower and military equipment concentration, 12 command posts and 2 missile and artillery weapon depots.
Russian air defence means have shot down 1 Su-25 of the Ukrainian Air Force near Chervonyi Yar, Kherson Region.
2 Ukrainian unmanned aerial vehicles were also shot down over Vladimirovka and 12 rockets of Smerch multiple-launch rocket system were intercepted near Kamenka, Donetsk People’s Republic.
In total, 143 aircraft and 112 helicopters, 660 unmanned aerial vehicles, 279 anti-aircraft missile systems, 2,678 tanks and other armored combat vehicles, 308 multiple launch rocket systems, 1,196 field artillery and mortars, as well as 2,503 units of special military vehicles of the Armed Forces of Ukraine were destroyed during the operation.

The official Kiev continues to prepare monstrous and ruthless provocations with massacres of civilians to further incriminate the Russian Armed Forces.