Road infrastructure in conflict affected areas of Ukraine has sustained significant damage. Russian troops have exacerbated this by destroying bridges, employing land mines and abandoning vehicles along key routes as they withdrew from northern Ukraine.
The destruction of river crossings in and around Chernihiv has left only one pedestrian bridge in the city itself across the Desna River. Prior to the war, the city had approximately 285,000 residents.
Damage to Ukraine’s transport infrastructure now presents a significant challenge in delivering humanitarian aid to areas formerly besieged by Russia. 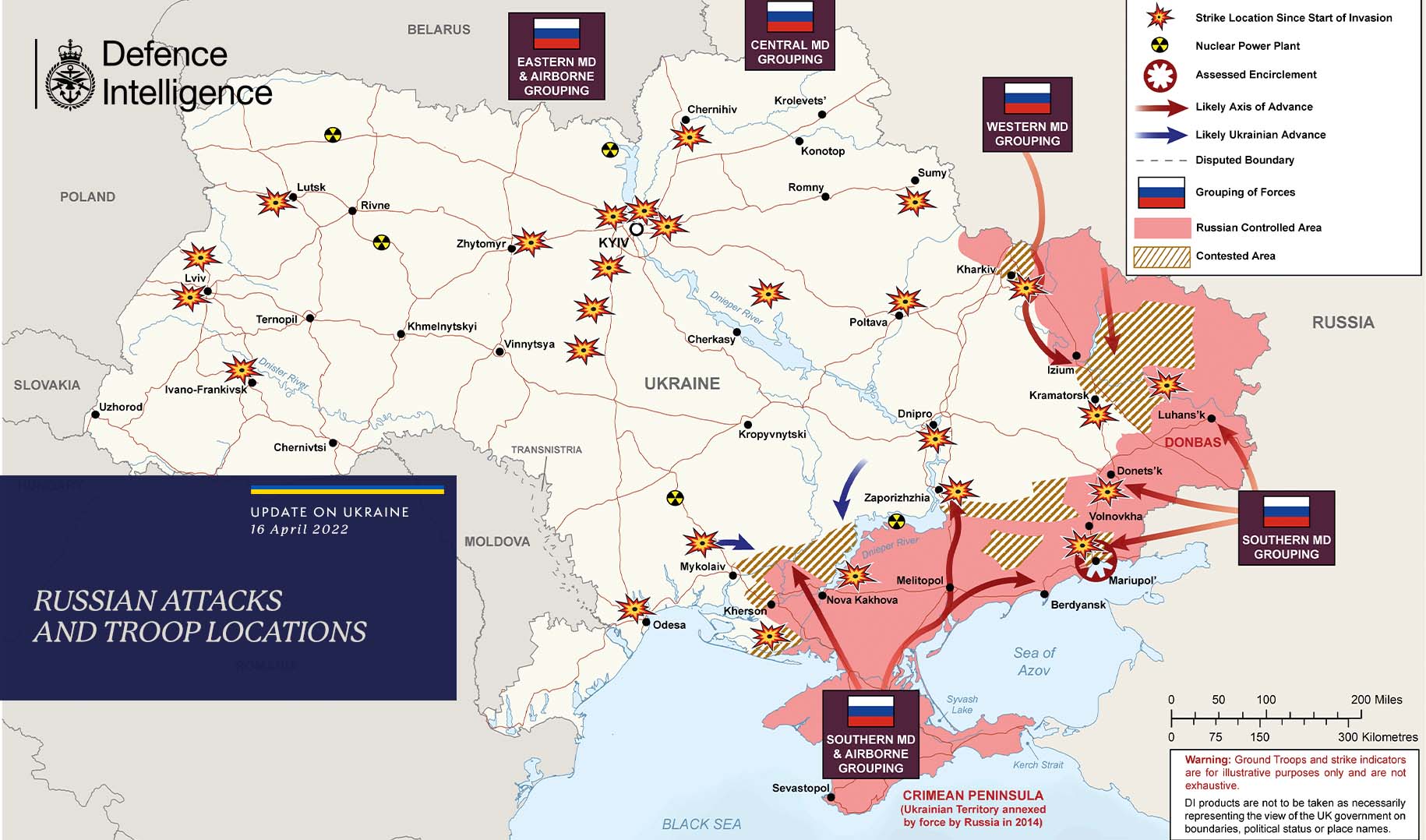 The fifty-second day of the heroic resistance of the Ukrainian people to a russian military invasion continues. The russian federation continues its full-scale armed aggression against Ukraine.
The most active actions of a russian enemy are recorded in Slobozhansky and Donetsk directions.
In the Volyn, Polissya and Siversky directions, the enemy did not take active action. There is a relocation of presumably separate units of the 35th and 36th Combined Arms Armies of the Eastern Military District. Trucks and special vehicles and refuellers move to loading areas.
In the Slobozhansky direction, the russian occupiers continue to fight involving separate units of the 6th and 20th Combined Arms Armies, the 1st Tank Army of the Western Military District, the 35th and 36th Combined Arms Armies, and the 68th Army Corps of the Eastern Military District. , airborne troops, coastal troops of the Baltic and Northern Fleets.
The main focus of the russian enemy is on the regrouping and strengthening of troops, continues the partial blockade of the city of Kharkiv and its shelling with artillery.
In the area of the city of Izium, the russian enemy concentrated up to 22 battalion tactical groups. The main efforts of the enemy are focused on maintaining the previously occupied positions and achieved boundaries. In order to strengthen the group in this direction, the deployment of additional units from the Combined Arms Army is noted.
It is possible that the russian enemy will intensify its actions in the direction of the settlements of Izium and Barvinkove in order to reach the rear of the Joint Forces units near the town of Slovyansk.
In the Donetsk and Tavriya directions, the russian enemy is trying to hold the occupied territories. Focuses the main efforts on taking control of the settlements of Popasna and Rubizhne, establishing full control over the city of Mariupol. Takes measures to restore combat capability and replenish ammunition. Trying to improve the tactical position. Continues shelling in most directions.
There were no significant changes in the situation in the Siverodonetsk area, the russian enemy increased the intensity of the fire in order to inflict losses, deplete our troops and possibly prepare for offensive operations.
In the Popasnyansky direction, the russian enemy exerts constant fire on the units of Ukrainian troops. With the help of motorized infantry units, in cooperation with the battalion of one of the private military companies, russain enemy is trying to improve the tactical situation, to advance deep into the settlement of Popasna. It is not successful.
In the area of the city of Toretsk, russian enemy continues to carry out periodic fire in order to deplete our troops. Prepares for the intensification of hostilities in the area of Avdiivka.
In the South Buh direction, the enemy’s actions were characterized by measures to restore combat readiness, replenish reserves, engineering equipment positions in the areas of Lyubymivka, Petrivka, Khreschenivka and strengthen their advanced positions, probably units of the mobilization reserve of the 1st and 2nd Army Corps.
It is expected that the enemy will continue to fight to reach the administrative borders of the Kherson region and will try to resume the offensive.
In the waters of the Sea of Azov, the enemy’s naval group continues to carry out tasks to block the port of Mariupol and provide fire support in the coastal direction.
Due to the presence of russian warships in the Black Sea, armed with naval cruise missiles „Caliber“, there is an increased level of threat of use of missile weapons by the russian occupiers at the defence industry and logistics infrastructure of Ukraine.
In the territory of Donetsk and Luhansk oblasts, ten russian enemy attacks were repulsed last day, three tanks, one armoured personnel carrier, one unit of special equipment, two cars and three enemy artillery systems were destroyed. One armoured personnel carrier of the invaders was captured.
The Air Force of the Armed Forces of Ukraine has hit seven air targets in the previous day: one plane, one helicopter, three UAVs and two cruise missiles.

A rusian enemy launched air and missile strikes on infrastructure and residential areas involving air and sea components.
Due to hostilities on the territory of Ukraine, the rotation of units of the 68th Army Corps of the Eastern Military District in the Syrian Arab Republic has been postponed.
According to the available information, the military enlistment offices of the Central Military District of the Armed Forces of the russian federation are agitating conscripts who are in reserve to sign short-term contracts for a period of 3 months to 1 year.
The russian enemy did not take active action in the Volyn and Polissya areas. During the regrouping of troops, the movement of units of the 83rd separate assault brigade of the armed forces of the russian federation from the territory of the republic of belarus (Gomel-Novobilitskaya railway station) was recorded.
The threat of missile strikes on critical infrastructure from the territory of belarus remains.
In the northern direction, the russian enemy completes the regrouping of troops of the Central Military District. It is possible that the russian occupiers will continue rocket attacks and artillery shelling from the territory of russia on military and civilian infrastructure of Ukraine.
In the Slobozhansky direction, the main efforts of the russian enemy are focused on regrouping, strengthening the grouping of their troops and continuing to maintain positions near the city of Kharkiv.
In the Izyum direction, the main efforts of the russian occupiers are focused on maintaining the occupied borders and positions in the area of the settlements of Sukha Kamyanka, Sulyhivka, Brazhkivka, Mala Komyshuvakha and Andriyivka.
The russian enemy is trying to improve the tactical situation, during the day made an attempt to conduct offensive and assault operations and tried to advance deep into the village Dovgenke. That was unsuccessful, suffered significant losses. To strengthen the group in this direction from the territory of the russian federation moved units from the 106th Airborne Division.
After the creation of the strike group and the formation of reserves, the enemy will try to resume the offensive in the direction of Barvinkove and Slovyansk.
In the Donetsk and Tavriya directions, the russian occupiers are trying to exert fire and carry out assault operations in most areas. The enemy strengthened the grouping of troops by moving from the territory of the Belgorod region to the area of the settlement of Svatovo separate units of the Central Military District.
It is likely that the enemy will continue to storm along the entire line of contact in Donetsk and Luhansk oblasts. It will focus its efforts on capturing the settlements of Popasna, Rubizhne, the city of Mariupol, as well as reaching the areas of Vugledar and Marinka. It will also prepare for the offensive in the Kurakhiv and Avdiivka directions.
At the same time, there is a decrease in the level of moral and psychological condition of units of the 1st Army Corps operating in the Donetsk direction. This is due to the significant losses of units, which were replenished at the expense of the mobilized.
In the South Buh area, the main efforts of the russian nemy focused on trying to establish full control over the territory of the Kherson region and maintaining the occupied positions. In the city of Kherson, the russian occupation administration distributed propaganda leaflets calling for peaceful coexistence with the occupiers. At the same time, intimidation and terror of the civilian population continues.
According to available information, the probability of involving a task force of russian troops in the transnistrian region of the Republic of Moldova in the armed aggression against Ukraine remains low.

During the day, 15 enemy targets were hit by high-precision air-launched missiles. Among them: in the areas of the settlements of Barvenkovo, Rubezhnoye, Popasnaya, Novozvanovka, Krasnoarmeysk, Selidovo, Novobakhmutovka, six concentration sites of Ukrainian military equipment and seven strongholds of Ukrainian troops were destroyed. As a result of the strikes, more than 320 Ukrainian servicemen were killed and wounded, 23 armored vehicles and seven vehicles for various purposes were destroyed.
Operational and tactical aviation destroyed 67 areas of concentration of personnel and Ukrainian military equipment during the day.
Missile troops hit 317 military facilities, including: 274 strong points and areas of concentration of enemy manpower, 24 control points and two field fuel storage facilities of Ukrainian troops.
Russian air defence means in the Odessa area shot down a Ukrainian military transport plane in the air, delivering a large batch of weapons supplied to Ukraine by Western countries. Two Ukrainian unmanned aerial vehicles were shot down over the localities of Lozovaya and Veselaya.
In total, since the beginning of the special military operation, 134 aircraft, 460 unmanned aerial vehicles, 246 anti-aircraft missile systems, 2,269 tanks and other armored combat vehicles, 252 multiple rocket launchers, 987 field artillery and mortars, as well as 2,158 units of special military vehicles have been destroyed.
The entire city territory of Mariupol has been completely cleared of militants of the Nazi formation „Azov“, foreign mercenaries and Ukrainian troops. The remnants of the Ukrainian group are currently completely blocked on the territory of the Azovstal metallurgical plant. Their only chance to save their lives is to voluntarily lay down their arms and surrender.
Let me remind you that in Mariupol at the time of its encirclement on March 11 there were: the 36th separate marine brigade, the 109th territorial defence brigade, the 503rd separate marine battalion, a company of the 53rd separate mechanized brigade, units of the 17th anti-tank brigade, Nazi formations „Azov“, „Aidar“, „Right Sector“, police and state border service units, as well as foreign mercenaries. The total number of this group was about 8 thousand 100 people.
During the liberation of Mariupol, 1,464 Ukrainian servicemen have already surrendered. The number of surrenders is increasing daily. Including those who escaped from the territory of Azovstal.
According to their testimonies, the total number of Ukrainian servicemen, Nazis and foreign mercenaries who took refuge on Azovstal does not exceed 2.5 thousand people. Thus, on April 16, in Mariupol alone, the losses of the Ukrainian group amounted to more than 4,000 people.
Therefore, Zelensky’s recent statements to the Western media that the irreplaceable losses of the Ukrainian military during the operation allegedly amount to 2.5-3 thousand are a common lie for him. The Ministry of Defence of the Russian Federation has reliable data on the true losses of the Ukrainian army, national guard and joined foreign mercenaries, which Zelensky is afraid to tell the people of Ukraine.
As of today, the irreplaceable losses amount to 23,367 people. We will soon publish some data from Ukrainian documents about their losses, revealing the place of death and the burial places of the dead.