Russia has admitted that the Slava-class cruiser Moskva has sunk. As flagship of Russia’s Black Sea Fleet, the Moskva served a key role as both a command vessel and air defence node.
The Soviet-era vessel was one of only three Slava-class cruisers in the Russian navy. Originally commissioned in 1979, the Moskva had completed an extensive refit designed to improve its capability and only returned to operational status in 2021.
This incident means Russia has now suffered damage to two key naval assets since invading Ukraine, the first being Russia’s Alligator-class landing ship Saratov on 24 March. Both events will likely lead Russia to review its maritime posture in the Black Sea. 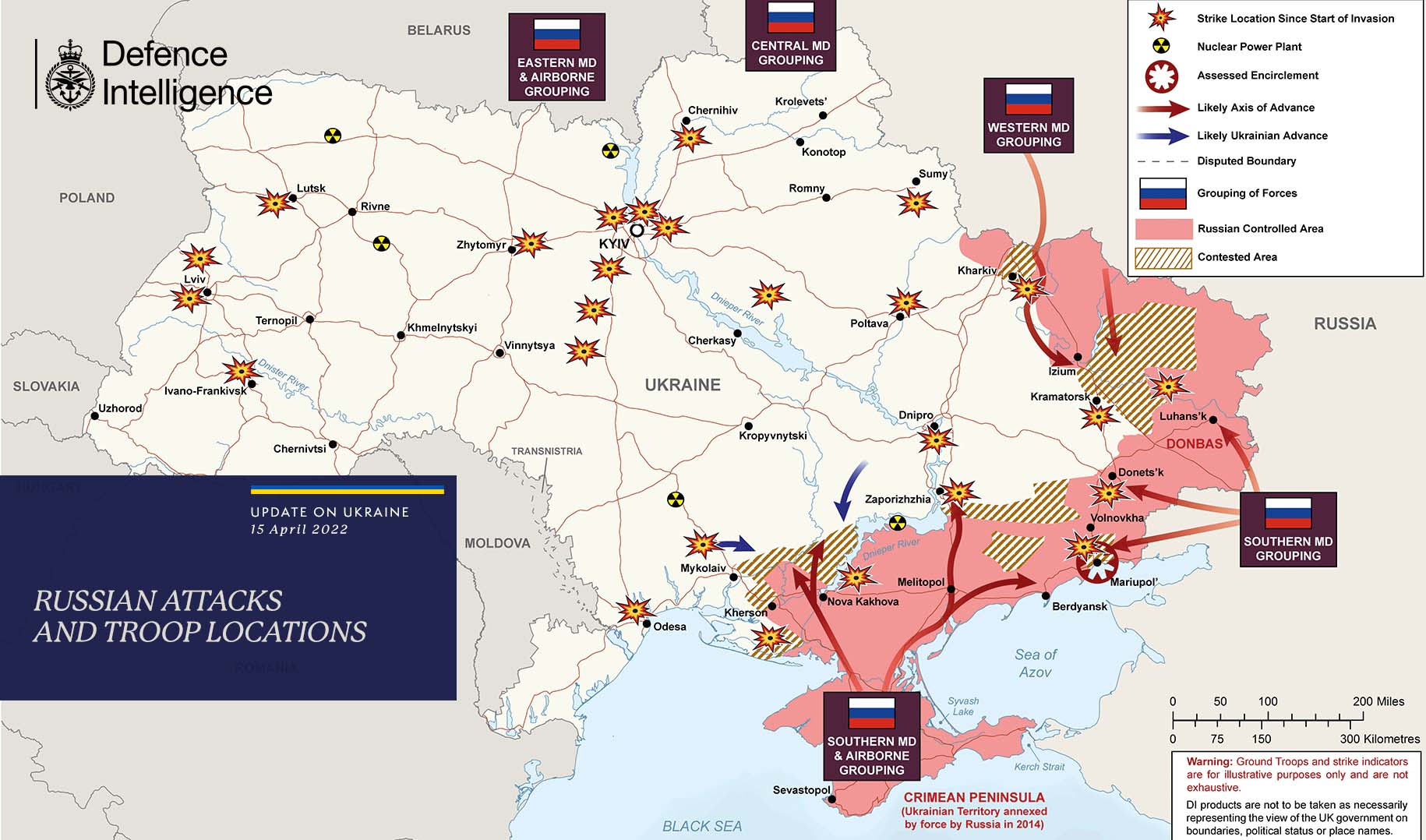 The fifty-first day of the heroic resistance of the Ukrainian people to a russian military invasion continues. The russian federation continues its full-scale armed aggression against Ukraine.
russian enemy continues to launch missile and bomb strikes on the infrastructure of settlements in Ukraine.
In the Volyn and Polissya directions, separate units of the armed forces of the republic of belarus perform tasks to cover the Ukrainian-Belarusian border in the Brest and Gomel regions.
The situation in the Siversky and Slobozhansky directions is unchanged.
In the South Buh area, the enemy is trying to carry out fortification equipment positions, replenish stocks of weapons and military equipment, ammunition, and fuel and oil. It conducts reconnaissance with the involvement of unmanned aerial vehicles.
In the Donetsk and Tavriya directions, the russian enemy’s main efforts were focused on attempts to capture the settlements of Popasna and Rubizhne. It is not successful.
Thus, in the territory of Donetsk and Luhansk regions, eight enemy attacks were repulsed in the past 24 hours, four tanks, six armoured personnel carriers, four infantry fighting vehicles, and one enemy artillery system were destroyed.

The grouping of Russian troops and units of the Donetsk people’s militia have completely liberated Illich Steelworks from Ukrainian nationalists as a result of offensive in Mariupol city.
High-precision, long-range sea-based Kalibr missiles struck a military facility on the outskirts of Kiev tonight.
The strike on Zhulyansk machine-building plant Vizar destroyed the production and repair workshops of long- and medium-range anti-aircraft missile systems as well as anti-ship missiles.
The number and scale of missile strikes against assets in Kiev will increase in response to any terrorist attacks or sabotage on Russian territory by the Kiev nationalist regime.
Russian air defence means near Gorodnya, Chernigov Region, have shot down 1 Ukrainian Mi-8 helicopter with S-400 anti-aircrasft missile system while it was returning to its airbase, after attacking civilians in Klimovo, Bryansk Region on April 14.
Ukrainian Air Force Su-27 fighter jet has been shot down near Lozovaya, Kharkov Region.
Also, 8 Ukrainian unmanned aerial vehicles were shot down near Izyum, Levkovka, Novaya Astrakhan, Novaya Kuban, Shchastlivoe, Chernobaevka and Cherniy Sokol.
During the night, 7 enemy assets were hit by high-precision air-based missiles.
Among them:
Tochka-U tactical missile launcher and a temporary deployment point of Ukrainian nationalist group, including up to 20 armoured vehicles and up to 50 nationalists, were destroyed near Yasenovoe;
the Ukrainian military equipment and weapons have been destroyed near Dergachi, Novoelizavetovka and Povstanskoe;
missile and artillery weapons and fuel depots were destroyed in Nikolaev and Parutino.
Missile troops have eliminated a mercenary unit of a Polish private military campaign in Izyumskoe, Kharkov Region. Up to 30 Polish mercenaries were killed.
A total of 221 assets were also hit, including: 12 command posts, 176 strong points and areas of enemy manpower concentration, 12 artillery firing positions were suppressed.
Operational-tactical aviation hit 13 military assets of Ukraine during the night. Among them: 2 depots of missile and artillery weapons, as well as 10 areas of concentration of Ukrainian weapons and military equipment.
Army aviation destroyed areas of manpower and Ukrainian military equipment concentration, including 3 strong points, 9 armoured vehicles and vehicles of various purposes in Gusarovka and Volobuevka.
In total, 132 aircraft and 105 helicopters, 245 anti-aircraft missile systems S-300, Buk-M1, Osa AKM, 456 unmanned aerial vehicles, 2,213 tanks and other armored combat vehicles, 249 multiple launch rocket systems, 966 field artillery and mortars, as well as 2,110 units of special military vehicles of the Armed Forces of Ukraine were destroyed during the operation.

Russia this week sent a formal diplomatic note to the United States warning that U.S. and NATO shipments of the “most sensitive” weapons systems to Ukraine were “adding fuel” to the conflict there and could bring “unpredictable consequences.”
The diplomatic démarche, a copy of which was reviewed by The Washington Post, came as President Biden approved a dramatic expansion in the scope of weapons being provided to Ukraine, an $800 million package including 155 mm howitzers — a serious upgrade in long-range artillery to match Russian systems — coastal defense drones and armored vehicles, as well as additional portable antiaircraft and antitank weapons and millions of rounds of ammunition. (…)
“What the Russians are telling us privately is precisely what we’ve been telling the world publicly — that the massive amount of assistance that we’ve been providing our Ukrainian partners is proving extraordinarily effective,” said a senior administration official, who spoke on the condition of anonymity about the sensitive diplomatic document.

Two Ukrainian Neptune missiles hit Russia’s flagship Moskva in the Black Sea, a senior Defense official said on Friday, providing the first American confirmation that the sinking of the Russian cruiser was the result of a Ukrainian strike.
Moscow had said the ship sank in stormy seas after an accidental fire caused an explosion.
The official said that American intelligence assessments say there were a number of casualties as the ship was struck but could not provide a specific number. He said that there were also some Russian sailors who survived and were seen being picked up by lifeboats.

During the day in all directions the situation has not changed significantly. A russian enemy continues to launch missile strikes on industrial and civilian infrastructure in Ukraine and is trying to launch an offensive in some areas. Air strikes on the city of Mariupol continue.
The partial blockade of Kharkiv continues.
In the Donetsk direction, the russian enemy tried to storm Marinka, but was unsuccessful.
In violation of the norms of International Humanitarian Law, the russian occupiers in the temporarily occupied territories continue to oppress the rights of Ukrainian citizens. Violating the rules of warfare, sabotage and reconnaissance groups of the enemy, to carry out sabotage on the territory of Ukraine, steal or, threatening physical violence, take away motor vehicles and civilian clothes from local residents.
In order to suppress Ukrainian resistance, the russian occupiers are filtering and searching for people involved in military service.
In the areas of Luhansk oblast temporarily occupied by the russian enemy, the usage of buildings and adjacent territories of secondary schools for the installation of additional field hospitals, places for weapons, ammunition and military equipment is recorded.
In some settlements, the russian enemy is trying to imitate elections and illegally appoint „local governments“ from among local residents loyal to the occupying power.

On the morning of April 15, Russian Armed Forces prevented an attempt by the Kiev nationalist regime to hit Kakhovskaya hydroelectric power station with a missile strike.
This critical facility regulates the flow of the Dnepr River, supplies electricity to Kherson region, and supplies water to agricultural areas in southern Ukraine and northern Crimea.
At about 7am Moscow time, a battalion of Ukraine’s 19th Separate Missile Brigade struck the Kakhovskaya hydroelectric power station with two Tochka-U tactical missiles.
The destruction of the Kakhovskaya hydroelectric power station dam by the strike was intended to result in the uncontrolled release of Dnepr water and cause flooding of many Kherson region settlements along with people in order to constrain the actions of the Russian Armed Forces.
Both missiles were shot down in mid-air by Russian air defence. Shrapnel from one of them fell on Novaya Kakhovka, Kherson region. Kindergarten and residential buildings were damaged.
A woman and a child were wounded and were given first aid by Russian servicemen on the spot. They are currently being taken to a medical facility.
The Armed Forces of the Russian Federation continue the special military operation in Ukraine.
During the day, 10 enemy assets were hit by high-precision air-based missiles.
Among them:
3 areas of Ukrainian 81st and 93rd separate mechanised brigades‘ units concentration in Barvenkovo, Kramatorsk and Lisichansk;
2 areas of Ukrainian military equipment and weapons concentration in Povstanskoe, Odessa region, and Novoelizavetovka;
missile and artillery weapons depots near Parutino and Nikolaev;
nationalist strong points in Yasenovoe and Sribnoe.
Missile troops and artillery struck 217 military facilities in Ukraine, including 15 command posts of Ukrainian military units, as well as 201 strong points and areas of enemy’s manpower concentration.
Operational-tactical aviation hit 6 military assets of Ukraine during the day. Among them: 1 artillery battery, 2 multiple rocket launchers, 2 missile and artillery ammunition depots and 3 areas of concentration of Ukrainian weapons and military equipment.
Russian air defence means shot down 1 Ukrainian Tu-143 Reis unmanned aerial vehicle near Oktyabrskiy.
In total, 132 aircraft and 105 helicopters, 245 anti-aircraft missile systems S-300, Buk-M1, Osa AKM, 457 unmanned aerial vehicles, 2,224 tanks and other armored combat vehicles, 251 multiple launch rocket systems, 971 field artillery and mortars, as well as 2,123 units of special military vehicles of the Armed Forces of Ukraine were destroyed during the operation.

Superior leadership and battlefield competence enabled Ukraine to repel the Russian advance in the forests and towns north of Kyiv.

During the EU defence ministers meeting we also shared our concerns on Mali and need to fight terrorism. We want to avoid spill-over effects to the Sahel region. We need to carefully consider our strategy. 3/3