Russia’s appointment of Army General Alexander Dvornikov as commander of the war in Ukraine represents an attempt to centralise command and control. An inability to cohere and coordinate military activity has hampered Russia’s invasion to date.
Like many senior Russian Generals, Dvornikov has previous command experience in Syria. Furthermore, since 2016 he has commanded Russia’s Southern Military District bordering Ukraine’s Donbas region.
Russian messaging has recently emphasised progressing offensives in the Donbas as Russia’s forces refocus eastwards. Dvornikov’s selection further demonstrates how determined Ukrainian resistance and ineffective pre-war planning have forced Russia to reassess its operations. 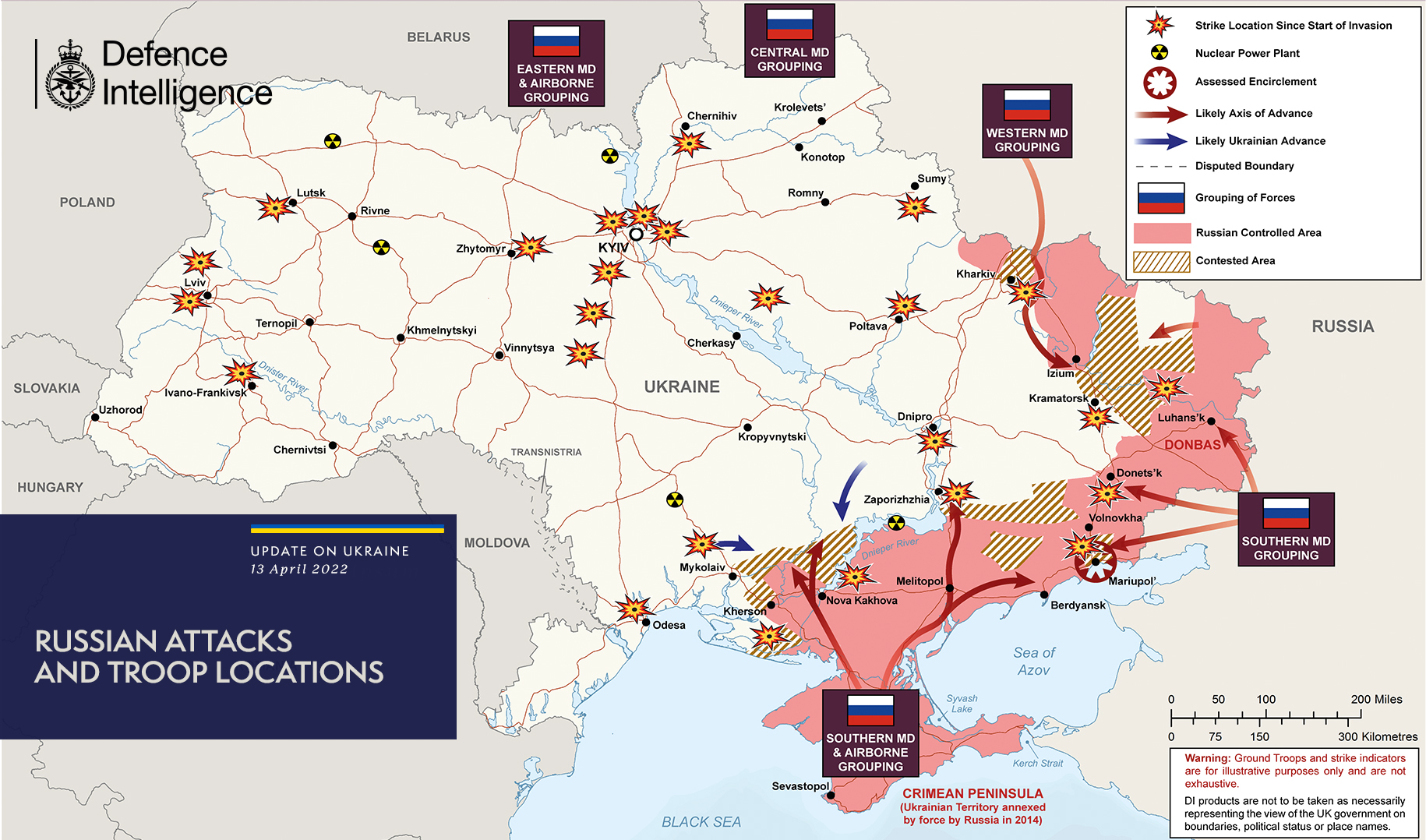 The forty-ninth day of the heroic resistance of the Ukrainian people to a russian military invasion continues. A russian federation continues its full-scale armed aggression against Ukraine.
russian enemy continues to launch missile and bomb strikes on civilian infrastructure in Kharkiv and Zaporizhzhia oblasts. Actively conducts air reconnaissance.
Until April 26, the russian federation introduced the so-called „yellow level of terrorist threat“ in the areas bordering our country and in the temporarily occupied territory of Crimea. These measures are probably carried out in order to organize the movement of military equipment, weapons and personnel on the territory of Ukraine.
The occupiers continue to send so-called „volunteers“ to Ukraine. Thus, according to available information, a battalion of about 400 people was formed in the Leningrad region. It consists exclusively of servicemen with combat experience. They were sent to Ukraine to reinforce one of the units of the 42nd Motorized Rifle Division of the 8th All-Military Army.
In the Siversky direction, it is possible to maintain separate units in the border areas of Kursk region with Ukraine to conduct demonstration actions in order to restrain our forces.
Partial blockade and artillery shelling of the city of Kharkiv continues in the Slobozhansky direction. In some temporarily occupied territories, the enemy resorted to forming units of the so-called „people’s militia.“ Appropriate work carries out to implement these measures.
In the Donetsk and Tavriya directions, the russian enemy continued to launch air strikes on Mariupol. It is launching an offensive near the Azovstal metallurgical complex and the Seaport.
In the South Buh direction, the enemy is trying to seize individual settlements, but without success.
Over the past 24hrs, the defenders of Ukraine have repulsed six enemy attacks, destroyed two vehicles and three enemy artillery systems in the Donetsk and Luhansk oblasts.
The Su-25 russian enemy plane was shot down by a group of the Air Force of the Armed Forces of Ukraine the day before. The enemy has significantly reduced the use of aircraft due to weather conditions.

During the night, high-precision sea- and air-based missiles destroyed 2 large missile and artillery weapons depots of the Ukrainian Armed Forces near Sadovoe and Chudnov. 4 Ukrainian helicopters – 2 Mi-24 and 2 Mi-8 – were also destroyed at Mirgorod military airfield.
Operational-tactical aviation of the Russian Aerospace Forces hit 46 military assets of Ukraine.
Among them: 2 command posts and 1 radar station near Borovoe, 2 multiple rocket launchers, and 4 areas of Ukrainian military equipment concentration near Borovoe and Peski-Radkovskoe.
Russian Air Defence means shot down 2 Ukrainian unmanned aerial vehicles in the air over Afanasevka.
Missile troops and artillery hit 693 enemy assets: 676 areas of Ukrainian personnel and military equipment concentration, 11 command posts and 5 logistics depots.
In total, 130 aircraft and 103 helicopters, 244 anti-aircraft missile systems S-300, Buk-M1, Osa AKM, 447 unmanned aerial vehicles, 2,169 tanks and other armored combat vehicles, 243 multiple launch rocket systems, 931 field artillery and mortars, as well as 2,076 units of special military vehicles of the Armed Forces of Ukraine were destroyed during the operation.
In Mariupol city, near the Illich Steelworks, 1,026 Ukrainian servicemen of the 36th Marine Brigade have voluntarily laid down their arms and surrendered as a result of a successful offensive by the Russian Armed Forces and Donetsk People’s Republic militia units.
Among them, the Ukrainian Armed Forces have surrendered 162 officers, as well as 47 servicewomen.
151 wounded Ukrainian servicemen of the 36th Marine Brigade received primary medical care immediately on the spot, after that they were all taken to the Mariupol city hospital for further treatment.

Most of this equipment can be provided by countries like Romania, Bulgaria, Slovakia, Poland, and the Czech Republic on the condition that donated units are replaced with newer equipment from NATO or the US. Despite the fact that Ukraine is asking for soviet weapons, because they are much easier to get from western allies, Ukraine is ready to accept American or NATO weaponry. Even though it will take some time to adapt to new weapons, the basics are still the same. In time, the Ukrainian army will successfully adapt to new weapons.

This military support will enable Ukraine to reclaim territory lost since February 24th and bring Russia to the negotiating table — not as a superpower throwing ultimatums, but as a neighbor willing to make real concessions. However, without additional weaponry, this war will become an endless bloodbath, spreading misery, suffering, and destruction.

As Russia prepares to intensify its attack in the Donbas region, the United States will continue to provide Ukraine with the capabilities to defend itself.
This new package of assistance will contain many of the highly effective weapons systems we have already provided and new capabilities tailored to the wider assault we expect Russia to launch in eastern Ukraine. These new capabilities include artillery systems, artillery rounds, and armored personnel carriers. I have also approved the transfer of additional helicopters. In addition, we continue to facilitate the transfer of significant capabilities from our Allies and partners around the world.

The new $800M military aid package just announced by Biden is „tailored to meet urgent Ukrainian needs for today’s fight as Russian forces shift the focus of their ruthless aggression now to eastern Ukraine,“ says @PentagonPresSec.
The package includes 11 Mi-17 helicopters that were originally destined for Afghanistan. The U.S. previously has given Ukraine five Mi-17s, Kirby said.
This package will also include the first 155mm howitzers the U.S. has sent to Ukraine.
Some of the equipment being sent will require training for Ukrainians — specifically the howitzers, MPQ-64 air-defense radar systems, and Switchblade drones, Pentagon press secretary John Kirby said. The Pentagon is still working out how they’ll give that training.
The U.S. is also sending 100 more armored Humvees, 200 M113 APCs (first combat use in Vietnam), 300 more Switchblades, hundreds more Javelins, Claymore mines, C-4/demo equipment, coastal defense drone vessels, plus CBRN and medical gear.

The russian enemy continues to launch systematic missile and bomb strikes on infrastructure in Kharkiv and Zaporizhzhia oblasts.
In the Volyn, Polissya and Siversky directions, the russian enemy units did not take active action. The russian occupiers are moving individual units in certain directions.
In the Slobozhansky direction, the enemy has partially blocked Kharkiv. Due to the impossibility of capturing it, the armed forces of the russian federation continue to use artillery to destroy the city’s infrastructure.
In the Donetsk and Tavriya directions, according to available information, the russian enemy is ready for offensive action. It continues to focus its efforts on capturing certain quarters of Mariupol and inflicting air strikes.
The russian enemy is trying to carry out assault operations in the areas of Siverodonetsk, Rubizhne and Popasna.
In the South Buh direction, the russian enemy conducts air reconnaissance in order to identify units of the Armed Forces of Ukraine.
In combat operations in parts of the south-eastern regions of Ukraine, separate units of the 103rd, 109th, 113th, 125th and 127th Motorized Rifle Regiments operate as part of a group of enemy troops. They were recruited during the forced mobilization of men from the temporarily occupied territories of Donetsk and Luhansk oblasts. Structurally, these regiments number up to 5 battalions numbering about 300 servicemen in each. Only 5-10 percent of the personnel of these units have combat experience. The regimental command consists of officers of the armed forces of the russian federation. These groups have significant problems with the provision of weapons, ammunition and medicine.
The russian enemy continues illegal actions against the civilian population in the temporarily occupied territories. The russians are checking documents, personal belongings and mobile phones.
The russian occupiers also carry out forced inspections of apartments.
In some occupied territories of Kharkiv oblast, the russian enemy has disrupted the cellular network. The russian occupiers are exerting an aggressive informational and psychological influence on the population. It is mostly aimed at trying to convince of the futility of the fight against the russian occupation forces.
We urge citizens not to believe in hostile propaganda and to continue total resistance.
It is significant that the russian occupying forces continue to suffer losses in the temporarily occupied territories. So, in the period from March 20 to April 12 this year, in the city of Melitopol, Zaporizhzhia oblast, about 70 servicemen of the Armed Forces of the russian federation were killed while patrolling the area at night.