Russian forces appear to be concentrating their effort to attempt the encirclement of Ukrainian forces directly facing the separatist regions in the east of the country, advancing from the direction of Kharkiv in the north and Mariupol in the south.
The battlefield across northern Ukraine remains largely static with local Ukrainian counterattacks hampering Russian attempts to reorganise their forces. 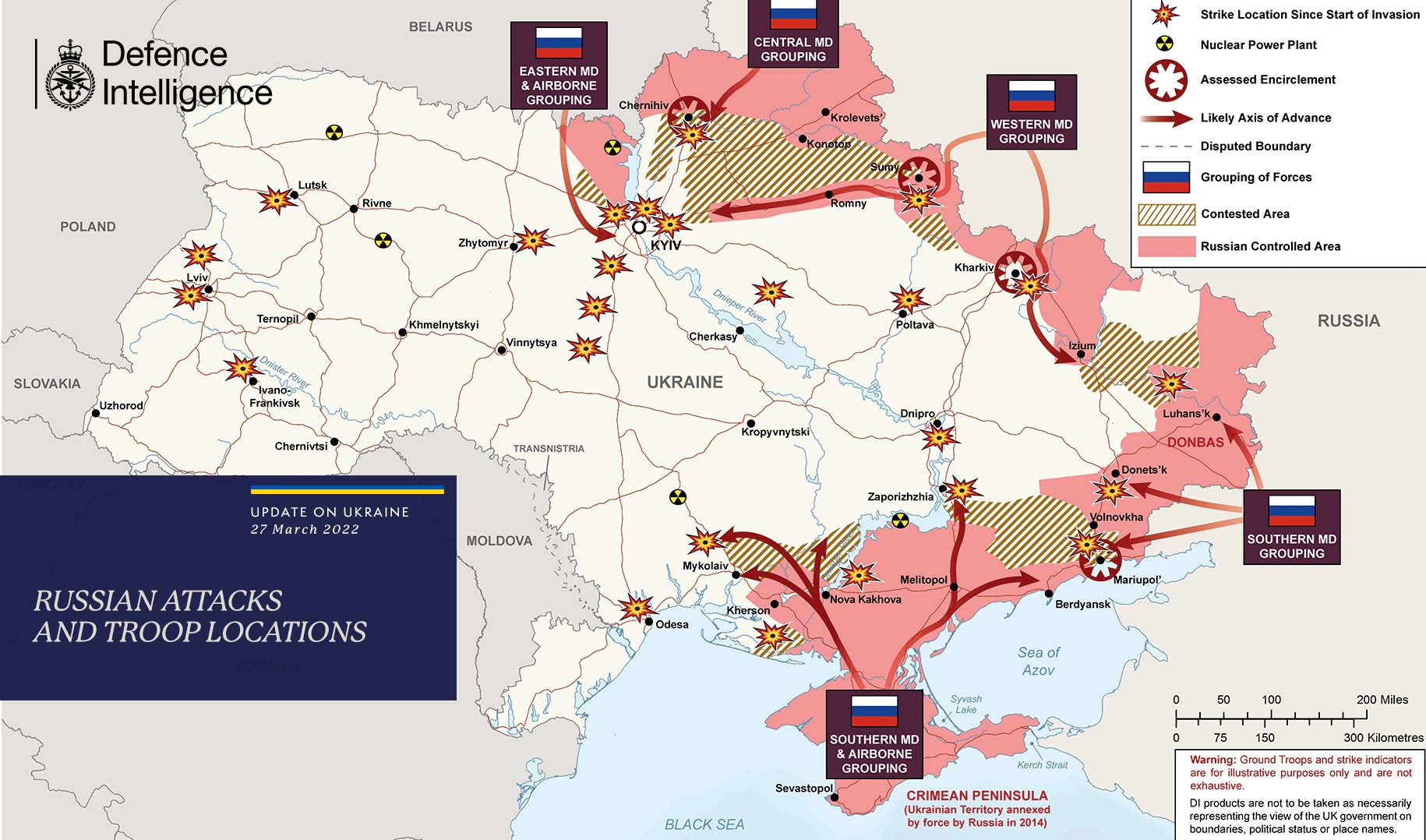 The Armed Forces of the Russian Federation continue their offensive in the course of the special military operation.
On March 26, high-precision, long-range aviation weapons destroyed a large fuel base near Lvov, which provided fuel for Ukrainian troops in western Ukraine, as well as near Kiev.
In addition, high-precision cruise missiles have destroyed the workshops of Lvov Radio Repair Plant in Lvov city. This enterprise has overhauled and upgraded Tor and S-125 anti-aircraft missile systems, radar stations for Ukrainian air force, electronic warfare equipment and sights for tanks.
Also, high-precision sea-based long-range weapons destroyed a warehouse of missiles for S-300 and Buk anti-aircraft missile systems in Plesetskoye, 30 kilometres southwest of Kiev city.
Operational-tactical and army aviation hit 67 military assets of the Ukrainian Armed Forces.
Among them: 2 command posts, 3 field depots with arms and ammunition, 11 strongholds of Ukrainian Armed Forces units and 20 areas of military equipment concentration.
Russian air defence means overnight destroyed 18 Ukrainian unmanned aerial vehicles over Novaya Basan, Peski, Borispol, Shchors, Vishnevoe, Kryukovka and Petrovskiy.
In total, 289 unmanned aerial vehicles, 1,656 tanks and other armored combat vehicles, 169 multiple launch rocket systems, 684 field artillery and mortars, as well as 1,503 units of special military vehicles of the Armed Forces of Ukraine were destroyed during the operation.

The enemy does not stop trying to replenish the loss of motor vehicles and establish logistics for its combat units.
The occupiers continue to terrorize and intimidate the local population in the temporarily occupied territories. There are many cases of looting, theft of people and property.
In the Donetsk and Luhansk areas, the Allied forces repulsed 7 enemy attacks. Ukrainian soldiers destroyed 8 tanks, 8 units of armored and 3 – enemy vehicles, one mortar. Losses of invaders in manpower are specified.
The Air Force of the Armed Forces of Ukraine has stroked 1 plane, 12 UAVs of various types and 2 cruise missiles in the previous day.
The Air Force of the Armed Forces of Ukraine was used to cover troops and facilities. The strike aircraft dealt devastating blows to the commanders‘ targets and targets.
…
The units of the russian federation are moving to the territory of the republic of belarus. These measures are carried out in order to rotate units that have suffered significant losses, strengthen existing groups, replenish food, fuel and ammunition, organize the evacuation of wounded and sick personnel.
Some units of the Armed Forces of the republic of belarus continue to be on the training fields.
In the Polissya, the enemy, under cover of artillery and aircraft fire, continues to consolidate on the achieved frontiers, preparing for the rotation of units.
In the Siversky direction, the enemy continues the blockade of Slavutych, does not stop trying to take control of Chernihiv. In the Lukyanivka and Rudnytske districts, the enemy suffered losses and withdrew.
In the Slobozhansky direction, the enemy is trying to regroup in the Sumy region. Near Kharkiv, it focused the efforts on replenishing its current losses. In the area of Slovyansk, the enemy is improving the engineering equipment of the occupied positions. The Ukrainian Defence Forces restored control over the settlements of Trostyanets and Husarivka.
In the Donetsk direction, occupation units are trying to capture Popasna, Rubizhne, Severodonetsk and Mariupol. They have no success. An unsuccessful attempt to storm Krasnohorivka was made. They suffered losses and left.
In the Tavriya operational area, the occupiers of the rosguard continue to fight resistance centres in the temporarily occupied territory.

Russian forces in Lyman are now surrounded, a spokesman for the Ukrainian armed forces has confirmed to us. https://www.washingtonpost.com/world/2022/09/30/russia-ukraine-war-latest-updates/

In 2019, I was under surveillance by the Orbán government for at least 7 months with #Pegasus. Same happened to my @direkt36 colleague @AndrasSzab & at least four other reporters.

Here's my new investigation into how the spyware was purchased & operated:
https://www.direkt36.hu/en/feltarulnak-a-pegasus-kemszoftver-beszerzesenek-rejtelyei/