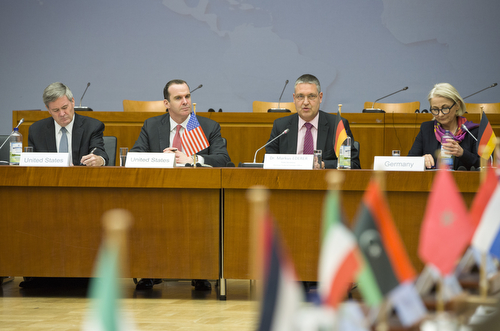 1. The Small Group of the Global Coalition to Counter ISIL (Da’esh) met today in Berlin at the invitation of Ambassador Sabine Sparwasser of the Federal Republic of Germany and U.S. Special Presidential Envoy Brett McGurk to review the progress of our collective effort to liberate Mosul and to build momentum towards the isolation and liberation of Raqqa. These are essential milestones in our campaign to put Da’esh on a path to lasting defeat. We also used this opportunity to focus more clearly on the threats Da’esh’s external operations pose to our nations and to explore what more we can do to support one another against these threats. As a Coalition, we remain united in our determination to destroy Da’esh, disrupt its global ambitions and discredit the toxic ideology that inspires its followers and sympathizers. The atrocities carried out by Da’esh over the last two years, including what we have seen reported recently in and around Mosul, such as massacres, discovery of mass graves and the use of civilians as “human shields,” only strengthen our resolve. We condemn these horrific acts in the strongest terms.

2. We welcome the decisive progress we have seen in Syria against Da’esh since July, including the expulsion of Da’esh from the entirety of Turkey’s border and from Manbij, Jarabulus, and Dabiq. We recognize Turkey’s significant contribution to the campaign against Da’esh and salute all our partners in Syria for their sacrifices. Their progress has deprived Da’esh of critical resupply routes as well as locations from which to orchestrate external operations. The isolation of areas held by Da’esh in northern Syria has exerted more pressure on Da’esh, curtailing its offensive capabilities and putting it on the defensive. Now that operations to isolate Raqqa are under way, we must remain focused on increasing the pressure on Da’esh and denying it any capability to plan and execute strikes, including external attacks.

3. At the same time, Iraqi forces have continued their advance into Mosul – the direct result of strong cooperation between the Iraqi Security Forces and Iraqi Kurdish Peshmerga. Mosul’s liberation will be a difficult endeavor – and we commend the heroic efforts of the Iraqi Security Forces, Peshmerga and Ninewa volunteer forces on the front lines. The Coalition will continue its steadfast support to all of these forces operating under Iraqi government command. We underline the importance of compliance with international humanitarian law and the need for all possible efforts to protect civilians. We commend the Government of Iraq for the safeguards it has put into effect to protect civilians in the conflict zone and for its leadership in planning the offensive with a broad array of stakeholders, taking into account the needs for humanitarian assistance, stabilization programs and post-liberation governance in Mosul. We welcome the initiative of the 20 October 2016 ministerial meeting on the stabilization of Mosul held in Paris to address these priorities and call for strengthened and inclusive governance in Mosul and its surrounding territory.

4. We strongly support the Government of Iraq as it works to defeat Da’esh and put Iraq on the path to stability and prosperity. We reaffirm our support for Prime Minister Abadi as he leads the effort to address governance, improve public services, reduce corruption, decentralize certain federal authorities and ensure the equal rights of all Iraqis irrespective of their religion, sect, gender and ethnicity. We recognize the importance of including women and girls in these efforts, and of creating opportunities for members of vulnerable segments of the population to participate on the national and regional levels. These efforts are fundamental to the overall process of national reconciliation and inclusivity that our Coalition hopes to foster in an Iraq free of Da’esh. We reaffirm our unwavering support to Iraq and remain committed to its unity, sovereignty and territorial integrity.

5. Public safety and immediate stabilization in liberated communities are top priorities for our Coalition. With the recent military advances, the number of people needing help is growing, particularly in the populated areas of Iraq. We urge continued support for the UN’s Funding Facility for Immediate Stabilization and its new Funding Facility for Expanded Stabilization, intended to help local partners in Iraq improve conditions for the safe, voluntary, and dignified return of residents and to promote the economic revival of their communities. We understand the Coalition’s program to train additional Iraqi police, led by the Government of Italy, must expand if we are to meet the needs of liberated communities in Iraq. We welcome the increasing numbers of previously displaced Iraqi citizens –over 1,050,000 to date – who have returned to their homes in liberated areas.

6. As in Mosul and elsewhere in this campaign, we stand ready to help liberated communities in Syria recover from the damage and suffering inflicted by Da’esh. The Small Group discussed the stabilization and humanitarian challenges associated with Raqqa and how we can address them. We recognize the unique capacity of the Syria Recovery Trust Fund (SRTF) to help restore essential services in areas of Syria liberated from Da’esh’s control, understanding that multinational efforts must be coordinated to meet human needs, provide for public security, and build the capacity of legitimate local authorities for governance of their communities. We also note the United Nations role in post-conflict stabilization in Syria stemming from the February 2016 Syria Donors Conference in London.

9. Our momentum is also building beyond the battlefield as Da’esh continues to be degraded in other significant ways. It continues to lose senior leaders at a high rate. We acknowledge with satisfaction credible reports of growing dissatisfaction within Da’esh ranks and increased desertions. The flow of new recruits has dropped to its lowest level since the conflict began, and the ability of foreign terrorist fighters to travel to and from the conflict area has been significantly curtailed. Da’esh’s resource base is shrinking as it loses territory and as Coalition air strikes degrade the resources that fund its operations, such as oil production and cash stores. Under growing financial pressure, Da’esh has cut its fighters’ pay by half or more in many areas and resorted to more arbitrary “taxation” and extortion, further undermining its credibility and reducing its attractiveness to recruits. Da’esh has increasingly resorted to conscription to fill its ranks and is constrained in its ability to mount military operations. The international community must ensure that Da’esh is cut off from available resources and cannot sell or trade oil, looted goods and artifacts or any other items of value.

14. We welcome Libya as the 68th member of the Global Coalition and stand ready to assist the Government of National Accord (GNA). The international community supports the GNA’s efforts to unite security and military forces under its command to defeat Da’esh and other UN-designated terrorist organizations and establish peace, security, and the rule of law for the Libyan people in a united, sovereign Libya. We welcome the success of Libyan forces in fighting Da’esh and other UN-designated terrorist groups, and shrinking Daesh’s control of Libyan territory to a small area. We are prepared to support the population of Sirte in their effort to restore stability to the city and allow the safe return of IDPs. We will continue to give our attention to Libya and the threat Da’esh poses to Libya and its neighbors.