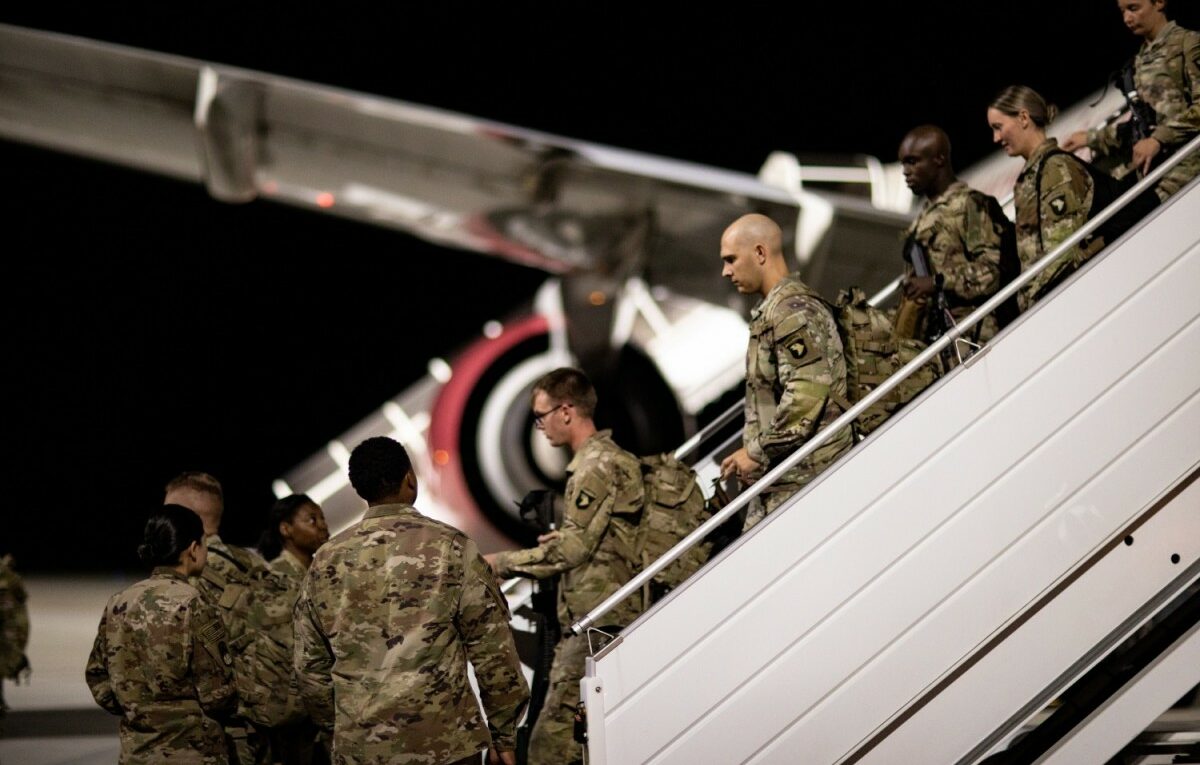 In response to Russia’s aggression against Ukraine, and in order to ensure the defense of our Allies, the United States deployed or extended over 20,000 additional forces to Europe, and there are currently approximately 100,000 U.S. forces providing defense and deterrence throughout Europe. The United States will continue to adjust its posture as needed in response to the dynamic security environment. In close cooperation with our Allies and hosting nations, President Biden announced today that the United States will take the following additional actions to strengthen NATO’s deterrence and defense and European security:

• Establishment of a permanent V Corps Headquarters Forward Command Post in Poland, which will improve U.S.-NATO interoperability across the eastern flank.
• Commitment to maintaining an additional rotational Brigade Combat Team in Europe, which the United States will position in Romania, with the ability to deploy subordinate elements for training and exercises across the eastern flank.
• Enhanced rotational deployments in the Baltic region including armored, aviation, air defense, and special operations forces, building further interoperability and intensified training with these Allies, and enhancing our ability to quickly reinforce and provide combat-credible defenses. We will maintain a persistent, heel-to-toe presence in the region and will intensify training with our Baltic Allies.
• An agreement to work with Spain to increase the number of U.S. destroyers stationed in Rota from four to six.
• Two squadrons of F-35 aircraft to the United Kingdom.
• Stationing of additional air defense and other enablers in Germany and Italy. 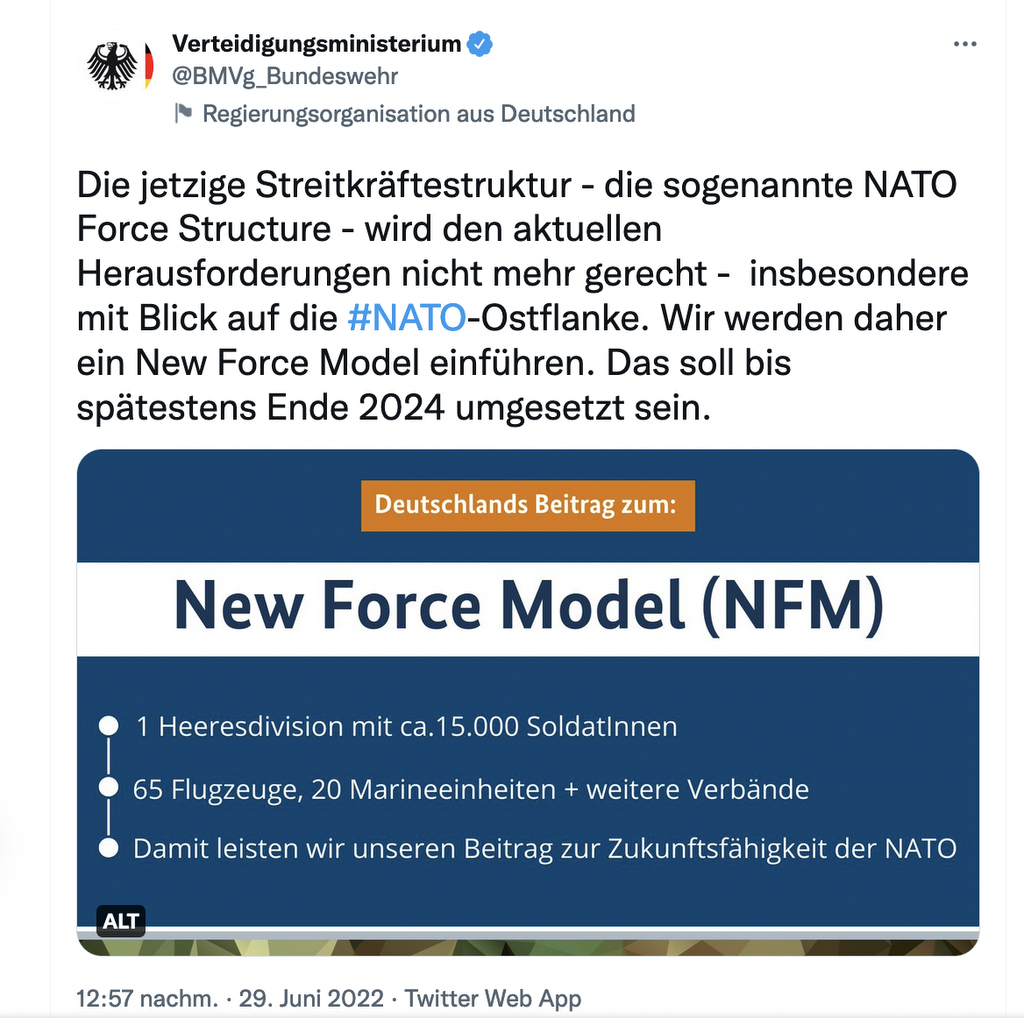 I would just add to John’s framing that the posture decisions that are being announced today, that the President is announcing today are reflective of the United States government’s recognition that, as John said, that the security environment has changed and — in particular, in the NATO AOR — that the eastern flank countries are facing a heightened threat of a Russian leadership that has shown itself willing and capable of launching military attacks on bordering countries.

And these decisions on posture now make those crisis-surge decisions and movements more sustainable and more combat-credible in several important respects.

By having those two rotational BCTs located in Poland and Romania, the United States will be able to sustain the kind of surge contributions that we’ve made in the last couple of months. That’s number one.

Number two, by having those BCTs in Poland and Romania, the United States will be able to sustain for itself and for those Allies a very rigorous schedule of training, on training ranges, particularly in Romania, but also in Poland.

U.S. forces rotating in Europe will be able to maintain a very high readiness level because we will have those BCTs in Romania and in Poland. And we will have, therefore, a higher level of interoperability with NATO Allies by being able to train with them in the European AOR on a regular basis.

And those forces then — third, and along the same lines — will support robust exercises — both NATO and other multilateral exercises — which, again, enhance interoperability and sustain a high level of readiness.

It’s those elements of credible combat capability that is really important for sending a message of effective defense capabilities and, therefore, effective deterrence. So that’s, sort of, the first framing about the importance of the BCTs in Poland and in Romania.

On top of that, as you’ve seen in the factsheet, the United States has decided to permanently forward station the V Corps headquarters Forward Command Post and Army Garrison headquarters and Field Support Battalion in Poland.

This is a significant decision precisely because of the changed security environment and the recognition that the United States needs to have a longer-term capability to sustain our presence, our training, our activities, and our support to the countries of the eastern flank, both bilaterally and through the NATO battle groups — battle groups which are in those eight forward flank countries.

Poland is a strong NATO Ally. It has made its own decisions on increasing defense spending, on increasing its own combat capability, on modernizing its defense forces. And so, the bilateral partnership that the United States has and the enhanced presence we will now have in Poland supports then the broader NATO capabilities.

And finally, I just want to point to a number of the non-ground forces — capabilities that are part of this posture decision. Specifically, the increase of destroyers that will be based in Rota, Spain, from four to six. And there are many I could point to in the factsheet, but I would also point to the significant air defense and air domain capabilities that will come along with these new posture changes to support the broader package of U.S. combat credibility in the NATO AOR. (…)

On the BCT that will be deployed — positioned in Romania: That is a U.S. bilateral contribution. It is — it does not replace or — the framework nation for the NATO battlegroup in Romania is France. And France — we support France’s leadership in that battlegroup.
That BCT could, in principle, be available for resourcing support to that battlegroup, you know, in future. We haven’t made any decisions along those lines. We would need to talk to France about that. But it is — it is separate from the French-led NATO battlegroup. (…)

So I can’t get into the total numbers that would add up from the force posture decisions, nor where they’re coming from for security and operational planning reasons.
I think we’ll be able to give numbers in the future as we, you know, identify the specific units. This — these force posture changes will take place over the coming months. But at this point, you know, we can’t really give you specific numbers on any of those questions, I’m afraid.

I started my visit to Copenhagen.First of all,I met with my 🇩🇰 colleague Morten Bødskov.
We discussed the training of 🇺🇦 combat commanders, demining specialists and personnel of @UkrLandForces @TDF_UA Awarded Mr.Bødskov with a medal "For assistance to the Armed Forces of Ukraine"

The war in Ukraine is closer than we Norwegians like to think. Just few km from Kirkenes are hundreds of troops preparing for battle on occupied lands https://twitter.com/barentsnews/status/1557398761105772545